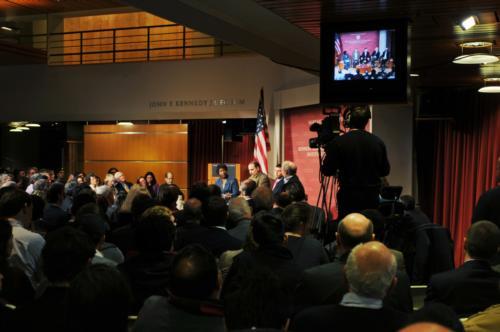 Going from backstage to center stage, four of the principal minds behind Obama and John McCain's campaigns convened in the John F. Kennedy Forum for a post-election retrospective moderated by PBS anchor Gwen Ifill.

Axelrod said that voters needed to be reassured that Obama represented “safe change,” and that the collapse of the investment bank Lehman Brothers on Sept. 15, with the first presidential debate on the horizon, provided an opportunity to do so.

“The manner in which Obama handled that crisis...answered that question for many voters,” Axelrod said.

McCain Campaign Manager Rick Davis said that the war in Iraq was key to McCain’s loss.

“That was our connection to the Bush administration,” Davis said. “It was the easiest connection to make, and also the most intense one.”

“Here we are in a year when we elected our first African-American president and I get to share the stage with four white guys,” said Ifill, who moderated the vice presidential debate between Alaska Gov. Sarah Palin and Sen. Joe Biden.

Davis said that McCain was still “very happy” with his choice of Palin as his running mate, but that he wished the Republican Party had a “deeper bench.”

“You get what you pay for,” Davis said, to laughter from the audience.

The Republican National Committee spent over $200,000 on clothes and stylists for Palin during the general election, the New York Times reported last week.

Plouffe said that the Obama campaign was pleasantly surprised that the Democratic Party’s rules committee stripped Florida and Michigan of their delegates for scheduling early primary elections, before eventually restoring half of the states’ delegates in May.

“Florida was concerning to us,” Plouffe said, adding that if Florida’s primary had been held before Super Tuesday, “it might have mitigated all of South Carolina, and, in fact, we might not be the nominee.”

Davis and McInturff said that the choice not to use Rev. Jeremiah Wright’s inflammatory comments as a campaign issue was an easy one.

McInturff said that it wasn’t worth potentially tarnishing McCain’s character in order to win by what would have been the slimmest of margins.

“If [McCain] had used that issue that way, you’d already be delegitimized as a president,” McInturff said. “You couldn’t function as a government.”

Axelrod said that when Wright’s comments came to light in March, it took the Obama campaign by surprise.

“It was a nervous time, but I tell you, the one man who wasn’t nervous was Barack Obama,” Axelrod said.

Obama quickly decided to give a speech on American race relations, Axelrod said, and worked late nights over a busy weekend writing the text himself.

Axelrod said Obama sent him a draft on his Blackberry at 2 a.m. the night before he was to give the speech.

“I spooled through the speech and I got to the end of it and I e-mailed him back and said, ‘This is why you should be president,’” Axelrod said.

—Nicholas K. Tabor contributed to the reporting of this story.

—Staff writer Malcom A. Glenn can be reached at mglenn@fas.harvard.edu.