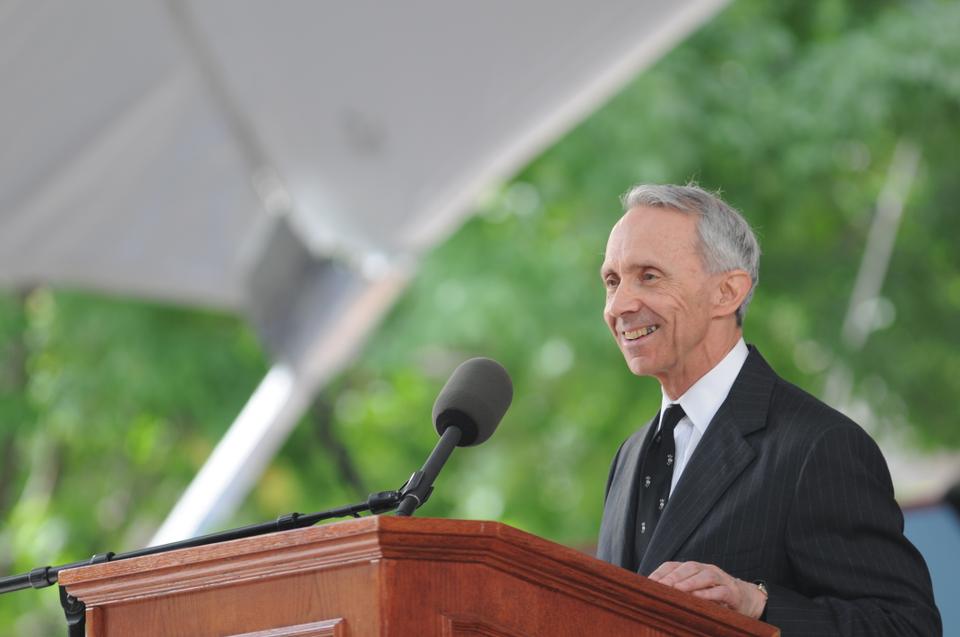 As he stood before thousands of Harvard alumni, former Supreme Court Justice David H. Souter ’61 did not take his audience’s intelligence for granted, using his Commencement address to argue against limiting Constitutional interpretation to mere textual analysis.

Souter, 70, who stepped down from the high court in 2009, avoided legal jargon and offered what audience members called an accessible explanation of his judicial philosophy.

In his 30-minute speech, the thin, gray-haired man from New Hampshire—who has been associated with the court’s liberal wing—argued that “Constitutional judging is not a mere combination of fair reading and simple facts.”

Souter offered a rebuttal of what he termed “the fair reading model,” which calls for an analysis of the Constitution that is grounded in the language of the Constitution—at the expense of a more nuanced analysis that considers the contemporary values and outlooks that can shape judicial decisions.

In his criticism of the model, Souter considered two famous decisions handed down by the nation’s most powerful court: the Pentagon Papers case in 1971 and Brown vs. Board of Education in 1954.

While the Court ultimately found that the United States did not have enough evidence to prohibit The New York Times and The Washington Post from printing classified documents about the Vietnam War, Souter said the case demonstrated that the Court does not uphold the absolute inviolability of the First Amendment.

“Even the First Amendment, then, expressing the value of speech and publications in the terms of a right as paramount as any fundamental can be, does not quite get to the point of an absolute guarantee,” Souter said.

Instead, opposing provisions of the Constitution must be reconciled to come to the final decision, he added.

The fair reading model, Souter noted, fails because the Constitution must be “read as a whole, and when it is, other values crop up in potential conflict with an unfettered right to publish, the value of security for the nation and the value of the President’s authority in matters foreign and military.”

Phil Bakker, whose son graduated from the College this spring, said that he enjoyed Souter’s speech and said that he “better understood what it takes to be a justice” afterwards.

Superior Court Judge William L. Downing, a parent of a Harvard Kennedy School graduate, said that he was glad that Souter did not feel the need to pander to the audience.

“It’s a rather intelligent gathering,” he said. He added that while the justice’s speech was about judicial philosophy, “it was inspiring in its own way.”

—Staff writer Eric P. Newcomer can be reached at newcomer@fas.harvard.edu.