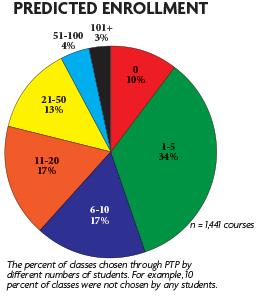 Pre-Term Planning data for Spring 2012 indicates an increased interest in computer science classes and suggests that a few courses with capped enrollments will be competitive.

Notably, 127 students reported their intention to take Computer Science 181: “Intelligent Machines,” a 182 percent increase from the last time the course was offered in Spring 2011.

Professor Ryan P. Adams, who is teaching “Intelligent Machines” for the first time, said although he does not expect to change the course’s material if it ends up larger than in previous years, there may be some logistical concerns that he hopes to avoid with the support of his qualified teaching fellows.

“The class wasn’t offered last year, so there’s a backlog of interested students,” said Adams. “This is the only course that deals with machine learning and big data, a topic that was on the front page of The New York Times recently.”

Heightened interest in the class may also be the result of the recent increase in computer science concentrators.

“The success and popularity of CS50 [“Introduction to Computer Science 1”] has led to this ripple effect of more people being exposed to and then excited about computer science,” said Adams.

PTP numbers, which were obtained by the Crimson from a faculty member, also provide a hint at the classes for which entry will be especially competitive this spring.

Folklore and Mythology 90i: “Fairy Tales and Fantasy Literature,” which centers on authors like J.K. Rowling, the Brothers Grimm, Lewis Carroll, and Hans Christian Andersen, had 411 students express interest. Only a lucky 28 will be randomly lotteried into the course, suggesting that as low as 6.8 percent of those who indicated interest will actually be able to take the class.

“I feel uncomfortable capping the course at 28, and I wish I could accommodate all the students who apply,” said Maria Tatar, the course’s professor and chair of the folklore and mythology department. “At the same time, I was thrilled with the commitment level of the students in the course last year.”

Tatar, who has conducted the course in both a seminar and lecture format in the past, said it would be difficult for her to run a large lecture course with a staff of 8 to 10 teaching fellows while also teaching a second course and chairing the department.

According to Tatar, another factor in favor of the capped enrollment is that few graduate students have indicated interest in serving as teaching fellows for the course.

“I have had only two applications this year from graduate students,” Tatar said.

The College originally introduced PTP in the fall of 2010 in an effort to make logistical preparations for the courses in advance. However, the numbers obtained by the tool have not reliably translated into actual enrollment in the past, as discovered in the last few years of data collection.

—Staff writer Amna H. Hashmi can be reached at amnahashmi@college.harvard.edu.