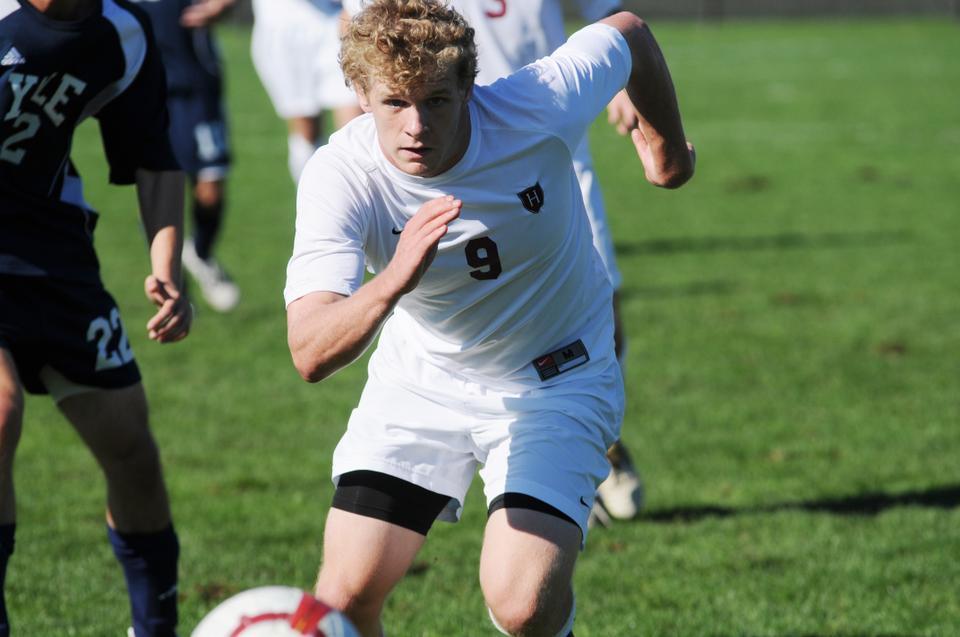 Northeastern senior midfielder Dante Marini tore through the Harvard defense on run after run. Marini, listed at 5’3”, and fellow senior Don Anding left the Crimson defenders gassed and created scoring chances all afternoon as the Huskies defeated Harvard, 1-0, in front of a capacity crowd Sunday at Northeastern.

Crimson freshman goalie Evan Mendez provided a solid performance, saving five shots and commanding the defense as it attempted to reel the Huskies duo in. But one slip up halfway through the second half proved to be the difference as Northeastern (3-0-0) extended its three-game winning streak. Off a change of possession, Anding took off down the left side of the field, before cutting back in and firing a quick shot on target.

Mendez got his hands on it but wasn’t able to maintain control as the ball dribbled away and into no-man’s land in front of an open goal. Northeastern sophomore Donovan Fayd’Herbe de Maudave won the race to the ball and put it in the back of the net, breaking a deadlock in the back-and-forth affair.

Though the Huskies dominated possession, the Crimson (0-1-1) was not suffering from a lack of chances. Just 28 minutes into the game, junior striker Connor McCarthy tore down the right wing before crossing in to classmate Kevin Harrington. Harrington had a shot at goal but his attempt sailed over the net, a problem that plagued many of Harvard’s attackers.

McCarthy, who also runs track, provided the most spark offensively for the Crimson, routinely outrunning defenders and getting the ball into scoring position.

But Northeastern proved to be the better side on the pitch Sunday. Egged on by a rowdy student section, the Huskies built up pressure to the point that a goal seemed to be only a matter of time. Though Mendez and towering senior defender Richard Smith shored up the defense and stopped Northeastern from capitalizing on a number of chances, the Huskies eventually broke through, taking the lead and never looking back.

“I think our game-day approach could be better,” Harvard coach Carl Junot said. “If we execute our system, we’ll be all right. It’s more about execution than strategy.”

The Crimson, which has been plagued by a lack of offense in recent years, may be in dire need of someone to step up. Sophomore striker Hiroki Kobayashi—the season’s lone goalscorer—went down just six minutes into the game after a vicious tackle by a Huskies defender. He hopes to be ready for action next week. Freshman Jake Freeman played in his stead.

“There was a tough tackle early in the game,” Junot said. “It wasn’t necessarily a dirty tackle, but I don’t think the intent was good either.”

Referee Bahij Salman kept control of a game that showed the potential of getting out of hand a number of times. In a two-minute span between the 67th and 69th minutes, three yellow cards were handed out: to sophomore Tyler Evans, to Northeastern defender Tyler Blum, and the final one to the entire Huskies’ bench.

Despite the setback and the day’s loss, Kobayashi seemed optimistic moving forward.

“Ever since the end of last season, we’ve been really excited for this season to start, and I think we’ve been playing well and just need to keep working hard to improve,” Kobayashi said.

A number of other mainstays from last season were left out of the lineup as well. Junior A.J. Agha, who tied for the team lead in goals last season, is recovering from a knee injury and will most likely sit out the remainder of the fall season.

Seniors Zach Wolfenzon and Brian Rogers were also out due to injury. Returning points leader Ross Friedman and senior Brett Conrad were left off the gameday roster.

The home opener comes against Michigan State (2-1-2) at 4 pm on Sep. 7. Harvard has won five straight home openers, and will look to extend that streak against a tough Spartans team from the Big Ten.

—Staff Writer Alexander Koenig can be reached at akoenig@college.harvard.edu.