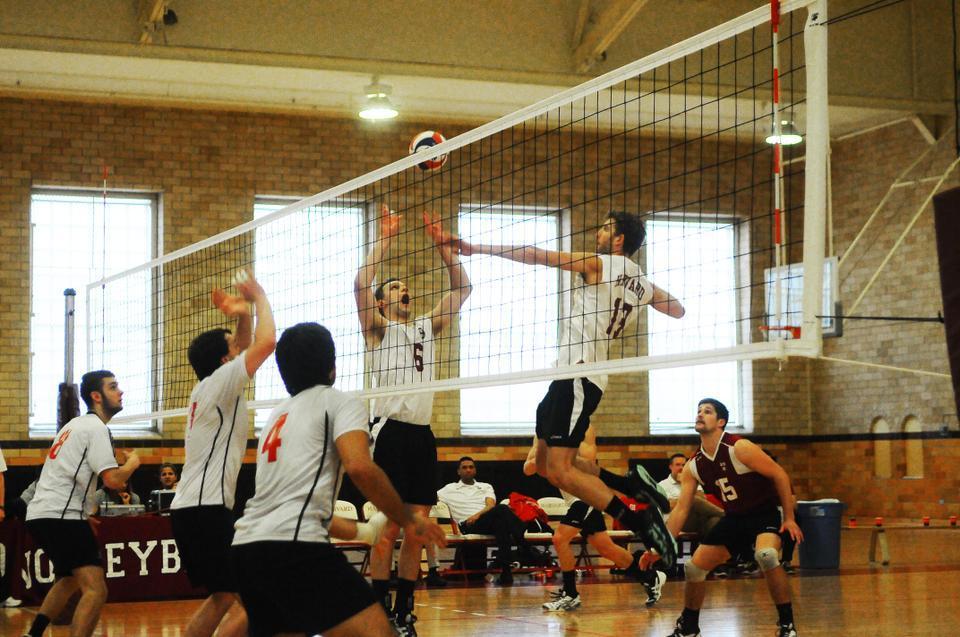 The Harvard men’s volleyball team launched itself into the finals of the EIVA tournament after a dramatic comeback win against George Mason. The Crimson will take on No. 14 Penn State for the championship. By Nzuekoh N. Nchinda
By Peter G. Cornick, Crimson Staff Writer

As the saying goes, revenge is a dish best served cold, and it was a dish the Harvard men’s volleyball team whipped up Thursday night, fighting back from a late deficit to take down George Mason, 3-2, in the EIVA semifinals.

The Crimson (18-8, 11-4 EIVA) had its back against the wall after dropping the second set in overtime, 28-26, and the third set in unconvincing fashion, 25-17. But unlike 2012, when the Patriots topped Harvard in the same semifinals matchup, Harvard rallied in the fourth set before outlasting George Mason (15-12, 11-3) in overtime of the fifth set, 19-17. The win marks the program’s first playoff victory, as the squad heads to its first-ever EIVA championship game against No. 14 Penn State on Saturday.

The Crimson clinched the match on a service ace from sophomore middle hitter Caleb Zimmick, who was one of Harvard’s best performers on both sides of the ball. Zimmick posted a .579 kill percentage with 13 kills, including two crucial hits in overtime of the fifth set, while leading the team with seven blocks.

“[Zimmick] swung real well out of the middle and they literally could not stop him,” Madden said. “He blocked phenomenally and made them make a lot of errors they wouldn’t have made if there was not a 6’9” blocker in front of them.”

The Crimson dropped both regular season meetings with the Patriots, including a loss at the Malkin Athletic Center three weeks ago, as Harvard struggled to adapt to George Mason’s strong service and blocking.

“George Mason is a big team with a lot of powerful players,” junior libero Chris Gibbons said. “We knew a lot of their tendencies in terms of what kind of set they were setting and how to defend against that.”

But the Crimson jumped out of the blocks quickly, winning the first set, 25-23, behind a balanced attack, with Zimmick and outside hitters Madden and DJ White all registering three kills. Madden registered a team-high 16 kills in the match, with White just behind him at 15.

The Patriots responded in the second set, using a six-point run to take a 20-16 lead. But Harvard coach Brian Baise called a timeout, and the Crimson began a run of their own, pushing the set to a 25-25 tie to force overtime. But two kills from Patriot outside hitter Mark Jones leveled the match.

George Mason had the better response after the trying second set, hitting another run midway through the third set and establishing a lead the Crimson did not recover from, going down, 2-1, after dropping the third set.

In a must-win situation, the Crimson took an early lead in the fourth set, firing out to a 12-6 lead. And though the Patriots rallied late, Madden’s five kills guided his squad to a fourth set victory, 25-22, to send the match to a decisive fifth set.

But with the season on the line, it seemed George Mason was going to streak towards the championship, as the Patriots came out swinging to gain an 11-6 lead, needing only four points to win the match.

But kills from White and co-captain Rob Lothman closed the gap, and the teams battled to a 15-15 tie to force overtime. With the pressure on, Zimmick turned up the heat, notching two kills and his decisive ace to give Harvard a place in the EIVA championship game.

The Nittany Lions, which topped Princeton in the other semifinal, is a perennial powerhouse in the EIVA. After forcing many five-set games, the Crimson notched its first win against Penn State at the Malkin Athletic Center in February, which gives Harvard confidence going into its first-ever EIVA championship. The task will not be any easier, as the EIVA tournament is hosted in University Park this year.

“We know they are a beatable team, but at the same time we know they are a pretty tough opponent,” Madden said. “They’ll have the crowd on their side… [but] we match up well and we’ll be ready.”