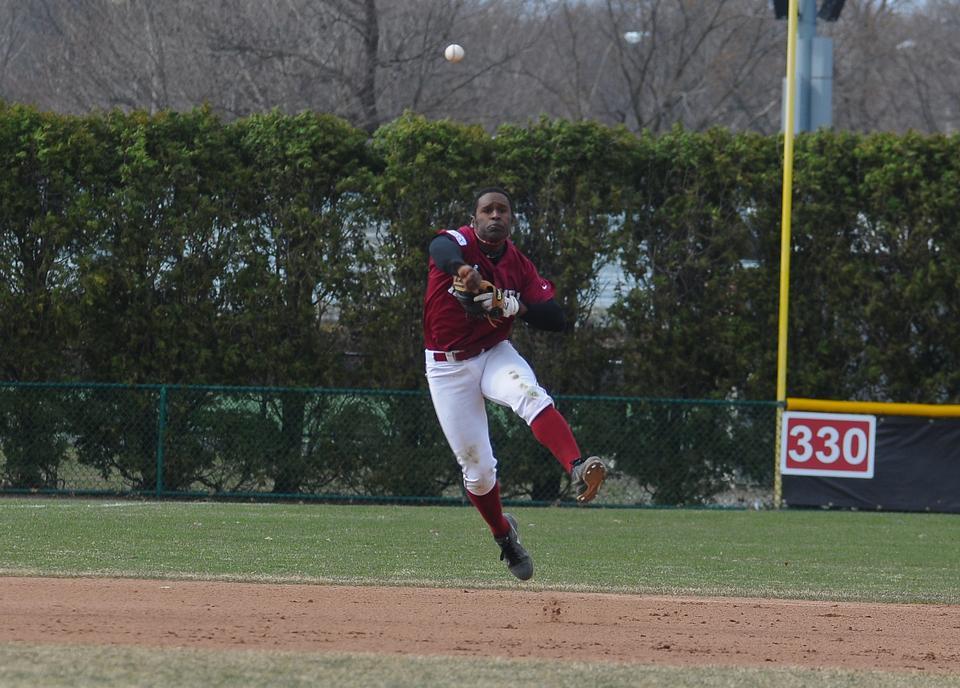 On an absolutely wild day at O’Donnell Field, it was only fitting that things should come down to multiple wild pitches.

After Princeton scored four times in the top of the ninth inning, the Harvard baseball team rallied back for three runs of its own to beat the Tigers, 20-19, and earn a doubleheader split on Sunday.

“It was a crazy game,” freshman catcher D.J. Link said. “It was definitely a good team win in that we stuck together and we never really gave up.”

In a contest that featured three grand slams, 38 hits, and nine errors and finished with a score better fit for a football game, the Crimson (6-21, 3-5) went into the ninth with a 17-15 lead.

But junior Baron Davis was unable to close the door.

The Tigers (7-20, 5-3 Ivy) began the frame with two doubles and two singles to plate two runs. Davis then hit Ryan Arendt with a pitch to load the bases, and two consecutive fielder’s choices allowed the Tigers to take the lead before co-captain Jordan Haviland replaced Davis and struck out Danny Hoy to end the inning.

But in a game in which it trailed 9-3, the Crimson had one more rally left in it.

Link led off with a walk. He then advanced to second on an infield single by Jeff Hajdin before getting picked off for the first out of the inning.

That’s when the wheels started to come off for the Tigers.

Hajdin scored on a wild pitch, freshman Sean O’Neill was intentionally walked to load the bases, and another wild pitch plated Klug before Princeton again elected to fill the bases by walking sophomore Tanner Anderson.

The Tigers then made a pitching change, replacing Donatiello with A.J. Goetz. But with junior Carlton Bailey at the plate, the reliever threw Princeton’s third wild pitch of the inning and Kregel came home to give the Crimson a walk-off win.

“It was great,” Link said. “They made a few mistakes and we were able to capitalize on them.”

After the Crimson scored the game’s first two runs, Princeton put together a seven-run second inning, highlighted by an Arendt grand slam. But the Crimson answered back with consecutive innings of four, six, and four runs.

“We were able to just put the ball in play,” Link said. “Situational hitting goes a long way—that’s how you have big innings.”

Harvard led off the bottom of the fourth with five consecutive singles to plate four, capped by an O’Neill two-RBI hit. The rookie drove in two more in the bottom of the fifth with another single, while a basesloaded walk gave the Crimson its sixth run of the frame.

Princeton scored three times during those two innings as well, and the Crimson went into the sixth ahead 12-10. In the bottom of the inning, Klug singled, Kregel reached on an error, and O’Neill was hit by a pitch before Anderson hit a grand slam to put the Crimson ahead, 16-10.

“The biggest factor about the second game was that the wind was blowing out,” Kregel said. “Anything in the air was going to go a long way.”

But the Tigers answered right back in the top of the seventh. Crimson junior pitcher Peter Kaplan loaded the bases on two walks and a hit by pitch, and Hoy singled to center, scoring one. Princeton’s Mike Ford then hit a grand slam to right center to bring the Tigers within one at 16-15.

The Tigers scored four times in the ninth to take the lead back before Harvard rallied to win.

The Crimson scored 20 runs for the first time in a contest since 2006 and finished with 23 hits, led by Link, who went 4-for-5. Hajdin, Klug, Kregel, and Anderson all had three hits for Harvard.

“A big thing that we’ve been talking about recently is believing in ourselves,” Kregel said. “[That] really helped us gain confidence to fight back and not just back down.”

The Tigers dominated the Crimson in the first game of the doubleheader, putting together a pair of five-run innings against Anderson, who fell to 0-4 on the year.

With two outs in the top of the second, Tyler Servais doubled to center, Johnny Mishu singled up the middle, Alec Keller doubled to right, and Hoy doubled to plate two before Anderson finally got out of the inning.

“We just didn’t come out with as much energy as we should have,” Kregel said.

Anderson ran into trouble again in the fifth. Hoy led off with a homer to left center, and the big blow again came with two outs, when Servais hit a grand slam to make it 10-0.

In the sixth, a Ford solo homer to center off freshman reliever Shaun Rubin plated another run for the Tigers, who added two more in the subsequent frame.

Harvard’s lone run came in the bottom of the third, when Link scored on an error.

Ford was dominant throughout the afternoon for the Tigers, allowing just four hits and striking out seven over seven innings to improve to 3-0 on the year.