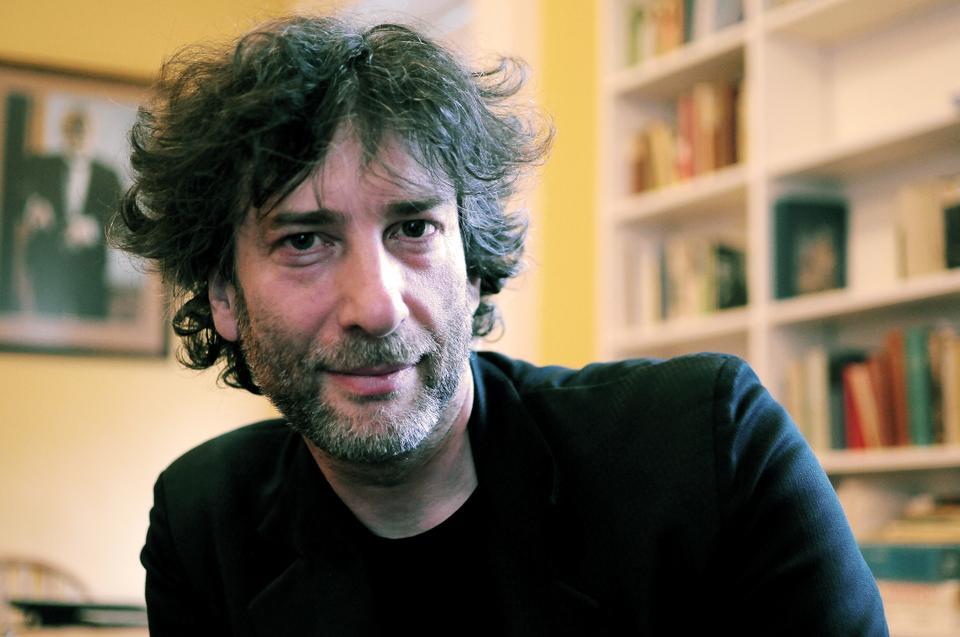 Near the end of his guest lecture in Folklore and Mythology 90i, Neil Gaiman informs the students that he doesn’t like doing interviews because it takes up time he could be using to work on a story, write a screenplay, or author a graphic novel. My gut drops when I then introduce myself as the reporter who’s going to prevent him from writing for the next half-hour. He smiles and shrugs, “We ought to get started then.”
By Noah B. Pisner

Fifteen Minutes: You just recently moved to Cambridge; what brought you here?

Neil Gaiman: The original plan for this year: I was going to be living in England while my wife was going to be on tour for most of the year.… But then it all went wrong because her best friend Anthony came down with a horrible form of leukemia. I got a call from her saying, “Anthony has leukemia. I’m going to put off my tour. I should be in the Boston area. I’d like to live in Harvard Square, are you up for it?” And I said, “absolutely.” Originally we were just meant to be here until August, but we like it so much we asked the people whose house we are renting if they mind if we stay until December, and they don’t mind, so who knows? We may be here forever, just extending it in six months increments. But I do love it. I love the Harvardiness of things.

FM: Maurice Sendak once said, “I refuse to cater to the bullshit of innocence; I refuse to lie to children.” Your novels and stories tend to have a rather dark take on childhood, a grim account of being young. Do you feel it’s more truthful to tell it that way?

NG: I do, but I don’t necessarily think it’s true that you need to tell children. I mean my new novel “The Ocean at the End of the Lane” begins with a quote from Maurice Sendak where he says, “I knew terrible things. But I knew I mustn’t let adults know. It would scare them.” It’s a novel in which the children know things that are much more terrible than the things the adults know. And at the end I had to decide, is this a children’s book or an adult’s book? I think it’s a book for anyone who’s ready for it, but I definitely wouldn’t hand it out to kids because it is a very dark book, and it doesn’t have much hope in it. A lot of what it’s about is childhood helplessness whereas I tend to look at something like “Coraline” and think it’s scary, it’s painful, it’s all of those things. It’s dark, but it’s fundamentally upbeat because it’s saying that dragons can be beaten. It’s saying, “yes, you can be brave, and brave does not mean you are not scared; it means you are absolutely scared and you do the right thing anyway.”

NG: That dragons can be beaten is. The bit about being brave anyway, I think, is me.

FM: Many of your stories are about looking back, be it echoing the terms history and mythology in “American Gods,” or your slantwise rendering of memory in “Sandman” and “The Ocean at the End of the Lane.” What do you think memory means for a child who’s especially young and in a way has less to remember?

NG: Kids remember their whole lives, just like adults. All you get to remember is your whole life. Do you remember how long a year was when you were a kid?

NG: A very, very long time. You may not remember a year in the same way you remember it as an adult because you’ve only lived five of them, or seven of them, but they’re very long. It’s going to be a very long time until the next Christmas, the next birthday, and you’ll have changed so much. For adults, it’s a much faster, weirder kind of process, to the point where I can look around now…. But I think kids are really fascinated by memory. Kids are really fascinated by what they do and don’t remember. And the weirdest thing then becomes looking back at childhood memories and trying to remember if they’re really yours, or they’re just something that somebody told you. Do you remember this happening? Or were you simply told that this had happened and now your confabulating and putting some kind of memory together? I think memory is incredibly important. I think we are our memories. If you take away our memories we are nothing; we barely exist as human beings, so we have to start again.

FM: When you write from a child’s perspective, there’s often this tautology, this superficial but dulcet fascination in the way they think. How do you access that as a writer?

NG: You try and remember what it was like without—in Maurice Sendak’s words—“the bullshit.” The great thing for me about writing “Coraline” was that it was written when I had very young daughters around....As a parent you get to re-experience childhood from a different direction, which is really cool. I don’t think there’s anything mysterious about the fact that Charles Schultz’s work on “Peanuts” fell off after his kids grew up, and then when his grandchildren turned up it started getting interesting again toward the end. It’s not so much that you’re observing what they do; it’s much more that being around them puts you back in touch. My first graphic novel “Violent Cases” began with throwing my son Mike, who would have been three years old at the time, over my shoulder. He wouldn’t go to bed, so I threw him over my shoulder and I’m walking up the stairs with him banging on my back. And as I’m walking up the stairs I’m remembering being six years old and my dad doing the exact same thing to me and me going, “if I had kids I would never do this to them.” And yet, here I am. And that sort of became the key going into “Violent Cases,” which was the first thing for me that was an exploration of memory and of the weird intersections between memory and reality.

FM: Speaking of your graphic novel work, I hear you’re working on a new “Sandman” series. What’s it like to return to something you haven’t written for 10 years?

NG: It’s not scary or troubling going back and working on it. That’s easy and fun. But it’s really scary and troubling feeling like a million people are looking over your shoulder. The world is waiting, and that’s horrible. That’s nerve-racking. It is so much more fun to write something that nobody is waiting for, nobody expects to be any good, nobody cares about, and then you give it to them and they go “this is wonderful!” That’s fun. “Sandman” so far there’s an awful lot of joy in it because I’m getting to write characters I haven’t written since 2002. …But there’s definitely, you know, does Death sounds like Death? Destiny sound like Destiny? Dream sound like Dream?

FM: What are you looking forward to most in life right now?