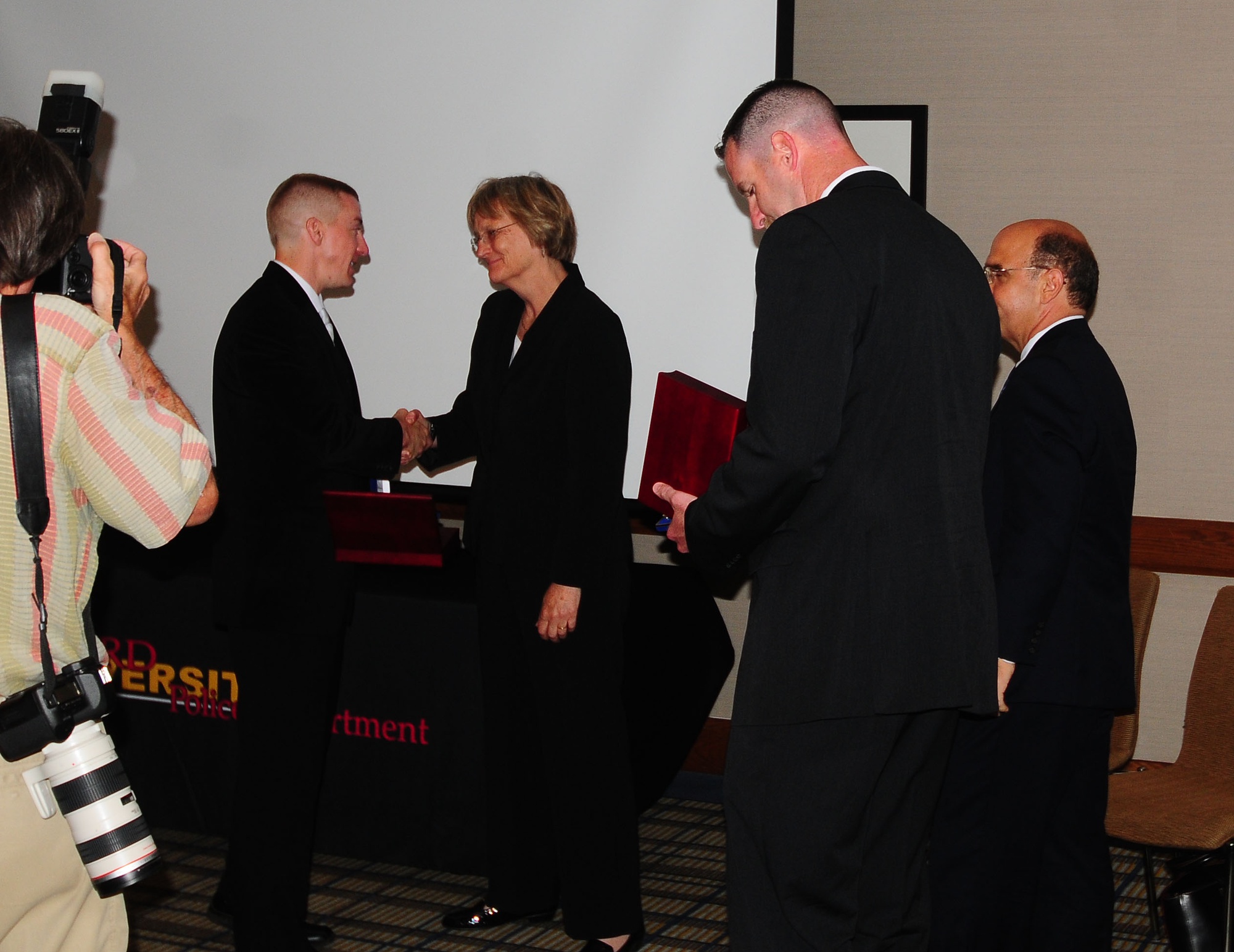 Four Harvard University Police Department officers and a Securitas manager were honored at a ceremony Monday afternoon for their service during the week of the Boston Marathon bombings and the subsequent search for the suspects.

HUPD officers Michael Rea, Ryan J. Stanton, Christopher Riccardi, and Peter McGaffigan were recognized for their efforts in Watertown in the early morning of April 19, when a shootout between the two bombings suspects and police wounded Richard H. Donohue Jr., a Massachusetts Bay Transportation Authority Police officer. The four officers administered aid to Donohue or offered other support to police at the scene.

Brian Reardon, security manager for the Faculty of Arts and Sciences for Securitas, was also honored for working long hours with HUPD to keep the campus secure.

“You are such a presence and a force on this campus,” University President Drew G. Faust said in remarks delivered at the ceremony, praising the honorees and the HUPD and Securitas personnel in the audience. “And I think [your] service is evident to us every day. Never more than this spring, but I think what happened this spring is simply a testimony to…the kind of work that undergirds all of our activities in every possible way.”

“It’s an amazing honor,” Stanton, who was awarded with a medal of valor, said in an interview after the ceremony. “To have the President here, and to be recognized with some of my peers—it’s an amazing gesture by the University.”

And although the ceremony on Monday focused on five individuals, both administrators and police officers characterized the honorees’ service as as testimony to the efforts of the Department as a whole.

“The recipients of our awards happened to be in the right place at [the] particular time when they were able to take actions that were based upon their commitment to service, training, and character,” HUPD Chief Francis D. “Bud” Riley said in his remarks. “The recognition they receive today...reflects upon all our dedicated personnel.”

For his part, Linskey said in an interview after the ceremony that he was grateful for the support and assistance that HUPD officers provided when crisis hit at the Marathon.

“We were hit with a tremendous blow to our city and our country, an evil, on Marathon Monday,” Linskey said. “But the best of our law enforcement partners and our community partners came out, and that included, without me calling, the men and women of the Harvard University Police Department.”

Rea, Stanton, and Riccardi were also honored for their efforts by the Boston Celtics at the TD Garden in April.