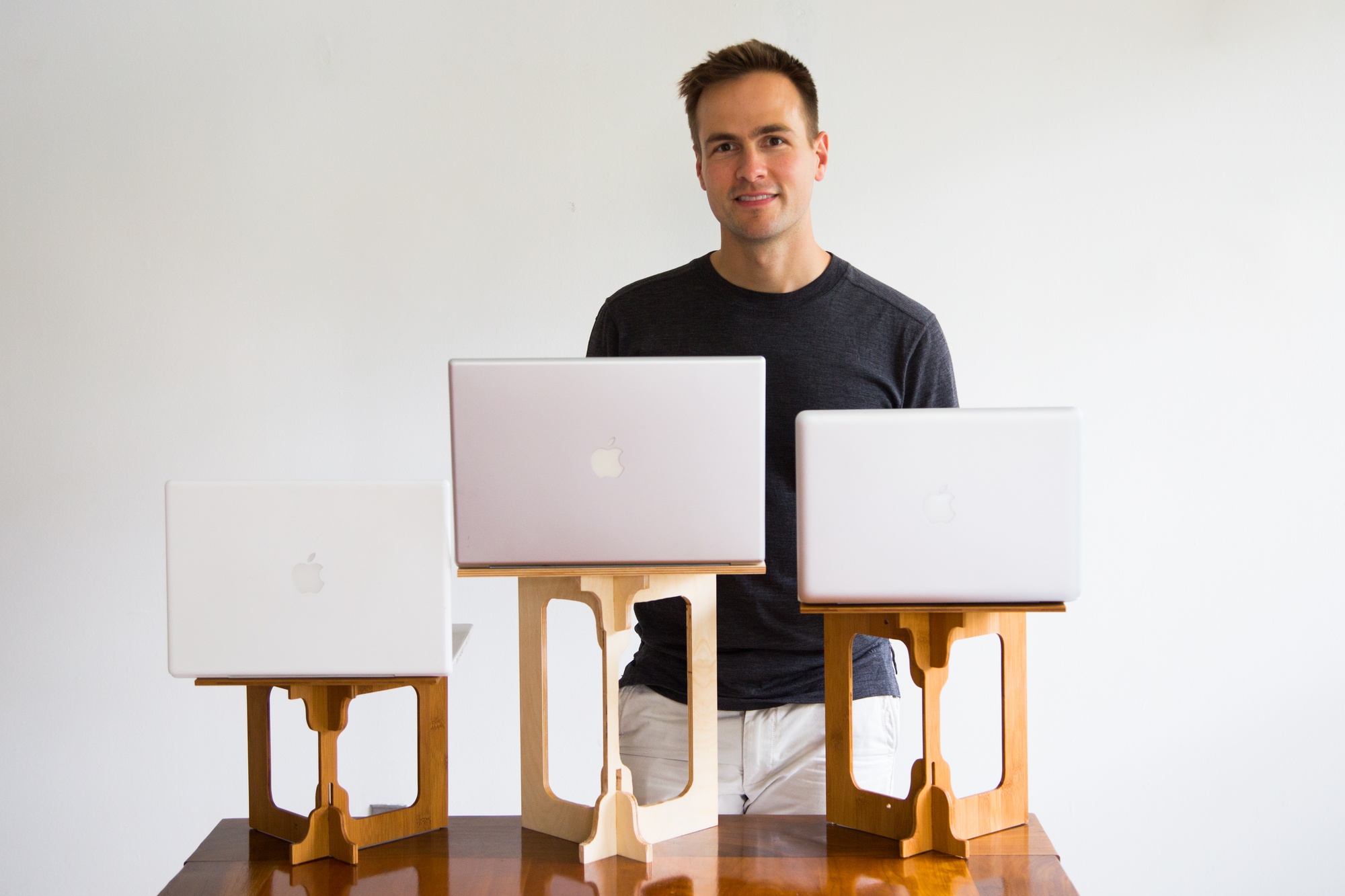 This semester, students have grown accustomed to the sight of Luke A. Leafgren, resident dean of Mather House, perching his homespun portable desk on the tables of the Mather dining hall, standing as he works. For now, Leafgren’s invention, a standing desk, is only elevating the laptops of a select few, but a Kickstarter campaign he started to finance its large-scale production has raised over $23,000 in about four weeks. 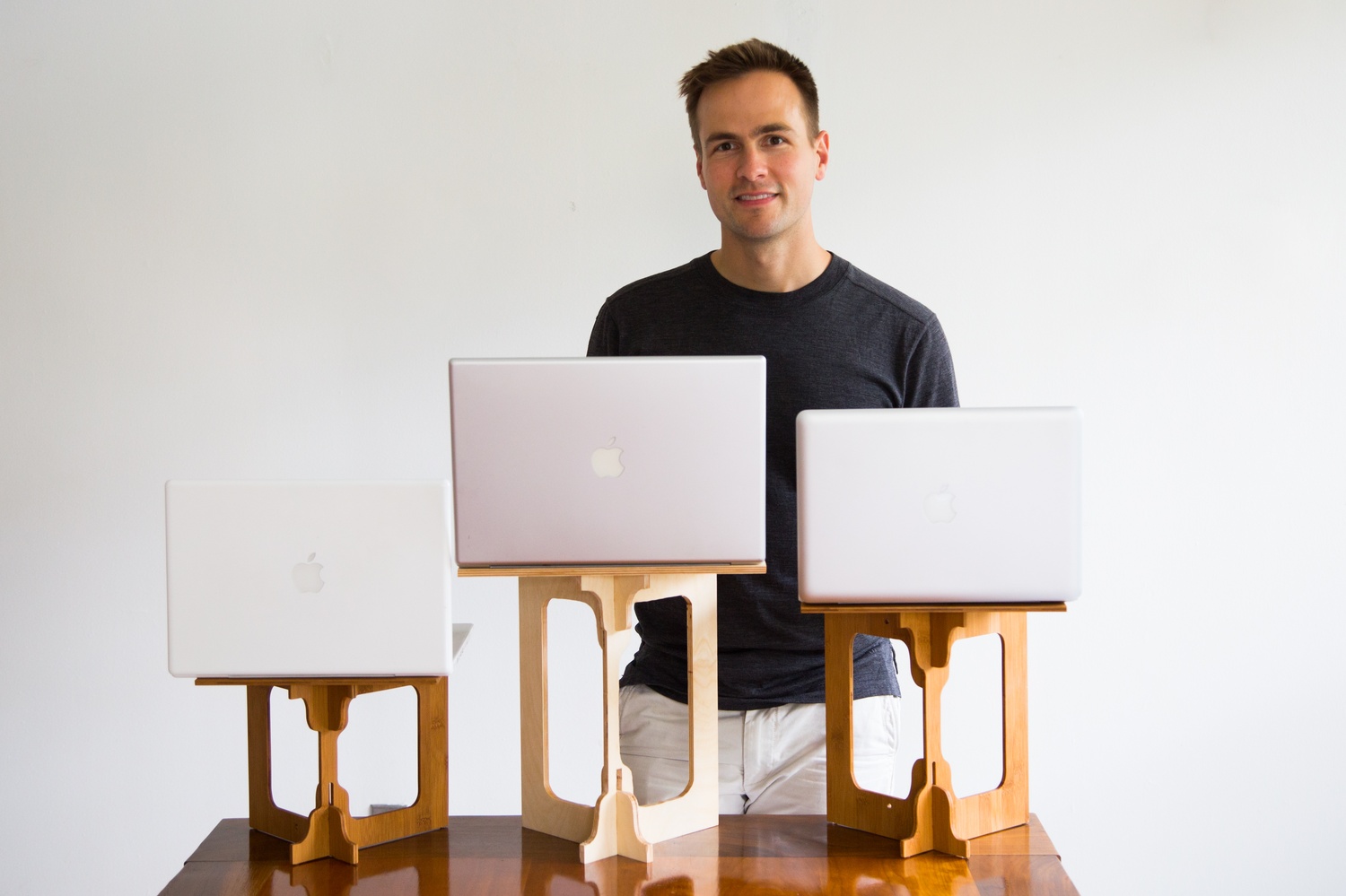 Luke A. Leafgren, resident dean of Mather House, has created a portable standing desk. By Courtesy of Lance Katigbak

The StandStand, as Leafgren calls the wooden structure, is a portable set of three interlocking panels, easy to assemble and disassemble.

After reading several studies warning of the health dangers linked to sitting too much, Leafgren began looking for ways to stand as often as possible. The idea for the StandStand, he said, “came to me one morning when I was sitting down for a meditation session.”

The StandStand went through several different phases before reaching its current model, which Leafgren perfected during a week at home this summer. Working in a high school friend’s cabinetry shop, he hammered out the final design.

“It was a really fun creative puzzle to think about, what would work, what would solve various problems,” he said.

The current prototype weighs only about two pounds and easily fits into a backpack, though it can support over 900 pounds, according to Leafgren. Its portability and affordability—the birch model comes to $50, while the bamboo totals $90—make it an appealing option over most stationary standing desks, which can cost several hundred dollars. There are currently three models available in different heights.

Leafgren said he spoke to several students as his idea was developing and cited the entrepreneurial spirit at Harvard as one of his influences.

“What I like is, it’s an additional way to connect with students,” he said. “So many people at Harvard are interested in innovation, interested in startups, interested in designing things, and I’m sure that was part of the inspiration for me to think I could try doing something, but it’s also given me a greater appreciation for what the students are doing.”

To help produce multimedia content for the campaign, Leafgren enlisted the help of Lance B. Katigbak ’16.

Katigbak helped polish a video script, shot and directed a video, and took some photographs of Leafgren using the StandStand around Harvard Square.

“I thought it was brilliant,” Katigbak said. “[Leafgren] talked me through the problems, he showed me the evolution, and that to me was an example of a really good design that doesn’t just look cool, but it’s also super functional and super useful.”

Alexander A. Wirth ’15, a student in Mather House who first heard of Leafgren’s idea last spring, has been using a StandStand for the past two weeks and says that he has “really enjoyed it so far,” noting the increased amount of energy he has when he works while standing.

“It’s really exciting to see our administrators taking on entrepreneurship like this,” he said.