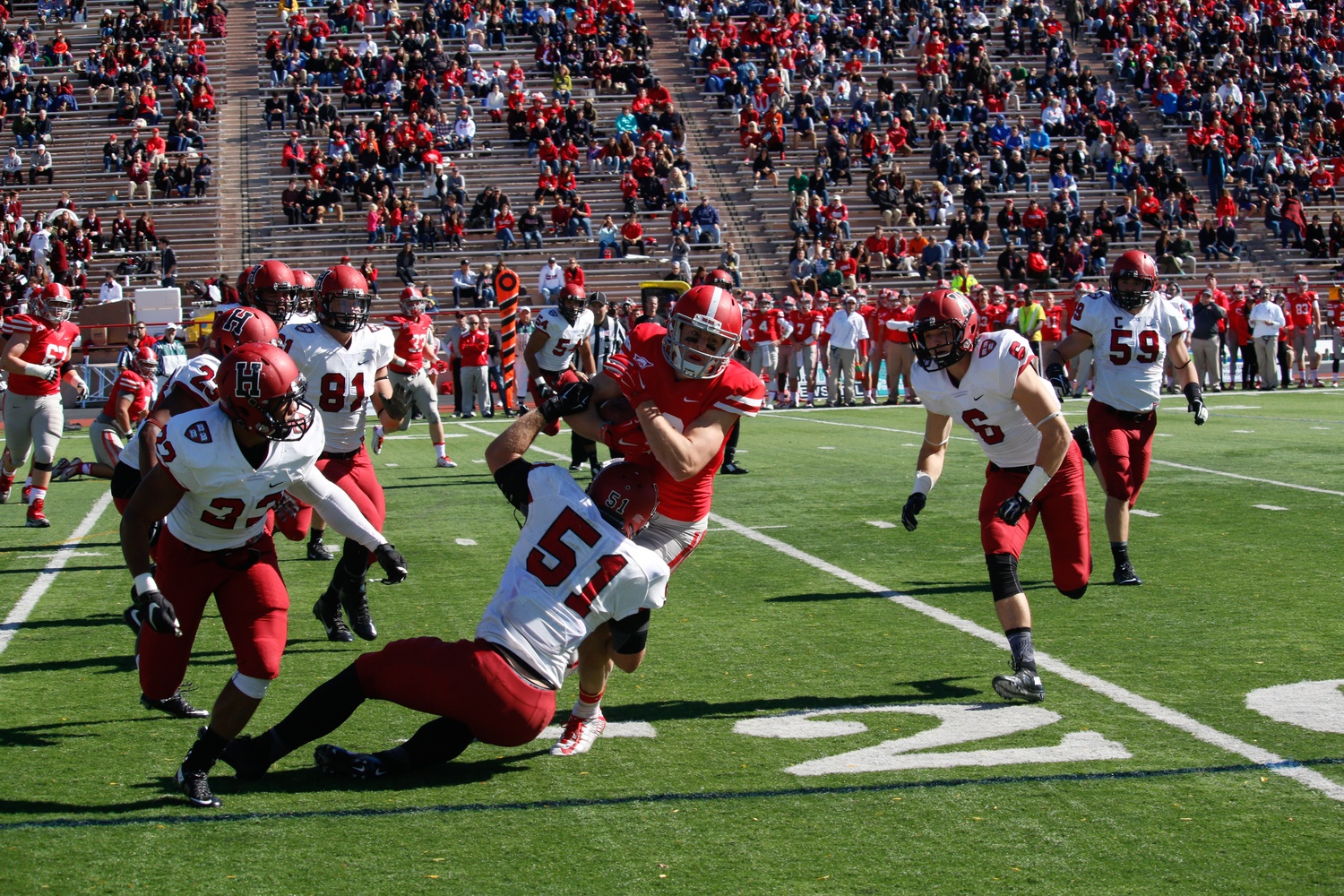 Senior linebacker Jacob Lindsey, seen above making a tackle on a Cornell player on Oct. 10, has 61 tackles so far this season. By George J Lok
By David Steinbach, Crimson Staff Writer

Harvard’s chances at an Ivy League title were slowly slipping away.

Week six. Harvard Stadium. In a heavyweight battle between two undefeated teams, Dartmouth led by six points and had possession at midfield with under four minutes remaining. Even if the Crimson defense forced a punt, the prospects of a successful drive with no timeouts remaining seemed remote.

As Big Green running back Ryder Stone received a pitch, Lindsey swept around the edge of the line and laid the ball carrier on his back, jarring the pigskin loose in the process. Captain and fellow linebacker Matt Koran was the first to dive on it.

Harvard had life once again, and the home team went on to win the game with a last-minute touchdown. The season, for the moment, had been saved.

If one had to bet who would be most likely to provide that defensive spark, the wiser among us would have pointed to the linebackers. Lindsey forced the fumble. Koran was in the right place. Senior linebacker Eric Medes, away from the ball on the decisive play, registered a game-high 10 tackles.

It was fitting that the trio stepped up in the season’s most pivotal contest. The starting linebacker unit—Lindsey, Koran, and Medes—has performed at an elite level through nine games this year and is a critical reason why Harvard is in position to clinch its third consecutive Ivy League title on Saturday against Yale.

“If you look at leadership and production, it’s as good a group as we’ve ever had as a senior trio,” Crimson coach Tim Murphy said.

Let’s start with production. With a single contest remaining, Lindsey, Koran, and Medes lead the team with 61, 55, and 51 tackles, respectively. The next highest defender comes in at 34. There has not been that big of a drop from the top three players in over a decade.

But who’s counting? The linebackers certainly may be.

“There’s even a competitive atmosphere between the three of us,” Lindsey said. “To go out there and be productive and make the plays you can make and go a step beyond, that I think feeds upon itself.”

Lindsey, Koran, and Medes all fall within the top 15 tacklers in the Ancient Eight. The trio certainly has much to do with the fact that the Harvard defense currently ranks third in the FCS with 12.3 points allowed per game.

“We have the utmost trust in each other,” Koran said. “We know that the other [two] guys are going to get the job done…. We kind of feed off each other. When one guy makes a big play, the other guy gets really excited.”

The production speaks for itself. But the impact of the linebackers extends far beyond mere statistics.

Ultimately, it starts with leadership. Rarely are all three starting linebackers seniors and experienced ones at that. Lindsey, Koran, and Medes each played important roles on last year’s top-ranked FCS defense, and they saw varying degrees of action their sophomore seasons.

Their individual production in 2015 is a testament to the amount the unit has gelled over the years through countless reps in practices and games. It also speaks to their durability. Despite the extreme physical demands of the linebacker position, all three starters have remained healthy this season, ready to call the shots for the other eight Crimson defenders.

Koran’s leadership, of course, is not limited to the defense. This year marks the 11th consecutive year that Harvard football’s sole captain has been a defensive player. In four of the last five seasons, the “C” has been worn by a linebacker.

The latest in that line of gritty leaders is Koran, for whom the position of linebacker forces him to adopt an identity of toughness and maximum effort on every play.

“It’s not the most glorious position,” Koran said. “You’re not out there scoring touchdowns or anything along those lines. You’re kind of doing it just for the team.”

Leadership and production also go hand in hand for Koran’s two position-mates. According to Murphy, Lindsey could be the most athletic linebacker in the Ivy League, and he led Harvard in tackles his junior season. Medes, for his part, is a three-year starter who has not missed a single game over that span.

Harvard has had some standout linebackers in recent years. For instance, captain Alex Gedeon ’12, who posted 92 tackles in his senior season, provided a degree of athleticism difficult to match.

But it is the combination of three veteran talents in Lindsey, Koran, and Medes that make the 2015 linebacker corps special. The whole is greater than the sum of the parts due to steadily acquired experience and leadership. The trio ultimately represents the heart of a Harvard defense that has reached new heights under its watch.

“They’ve played a lot of games together,” Murphy said. “So the chemistry and the maturity, the poise, and the production of that group is really sort of unique for all of those reasons. It’ll be really, really challenging to replace those guys next year.”