Football Travels to Columbia Looking To Continue Dominance Over Lions 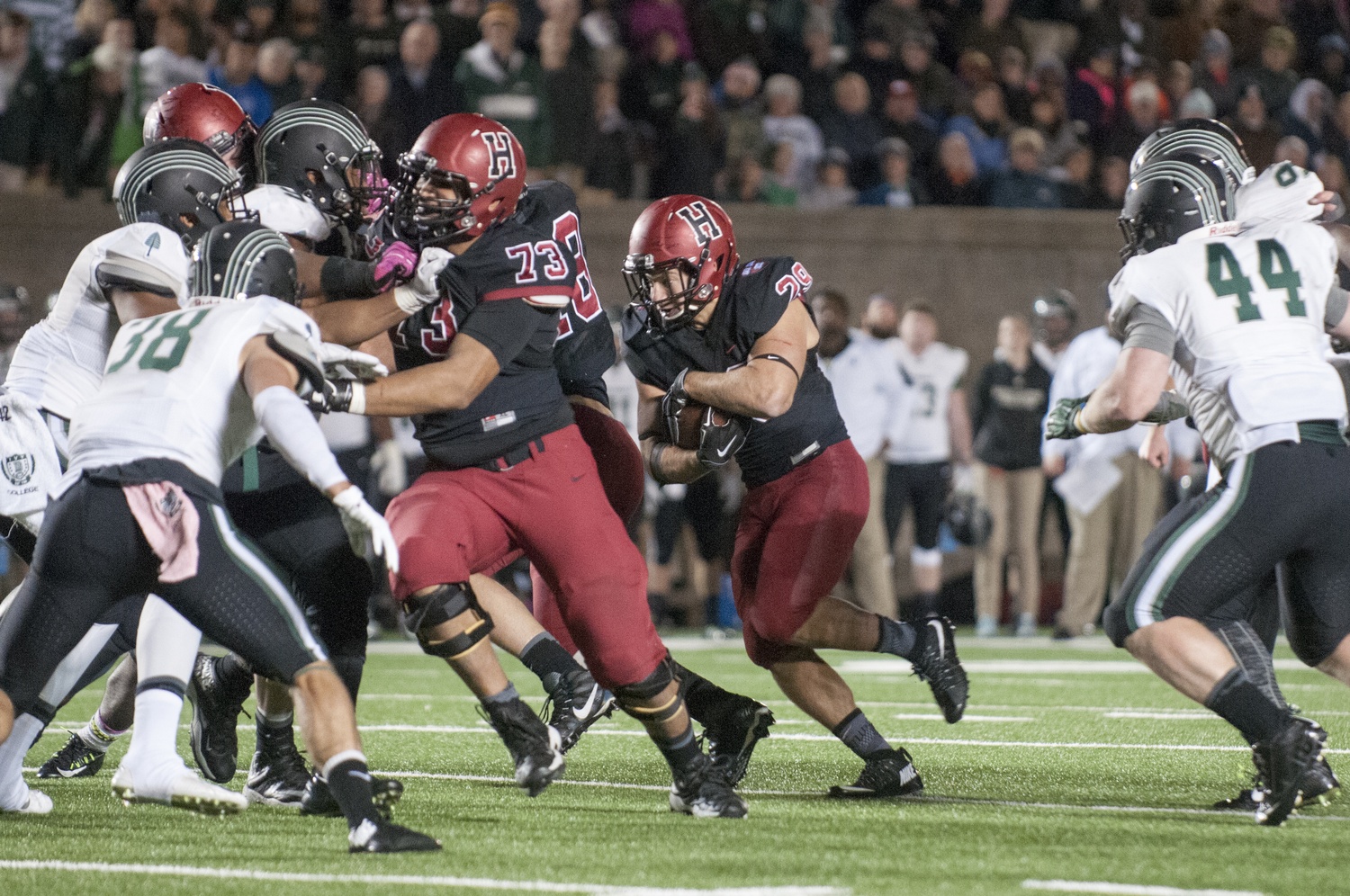 Senior running back Paul Stanton Jr. and the Harvard offense will look to continue its prolific production against an improving Columbia defense. By Mark Kelsey
By David Steinbach, Crimson Staff Writer

In the locker room, Harvard coach Tim Murphy leapt headfirst onto the heads and shoulders of a mob of shouting Crimson players.

In the postgame press conference, captain Matt Koran said the team was “blessed with a miracle tonight.” Had the game gone the other way, senior linebacker Jacob Lindsey admitted that “we all would have been crushed.”

The showdown between the two undefeated squads had a decisive feel to it. For many, the contest represented a de facto Ivy League title game. Picked to finish first and second in the conference, Harvard and Dartmouth had rolled over most of their respective competition in 2015.

But the reality is that the Friday night battle was not a championship game. Three more tilts stand between the Crimson and an Ancient Eight title. Three more contests for a chance at a second consecutive undefeated season.

The final stretch starts with Columbia. When Harvard (7-0, 4-0) kicks off on Saturday afternoon in New York, the team will have scored 148 straight unanswered points against the Lions (2-5, 1-3). With this history in mind, and with second-place Penn next on the schedule, it may be tempting to peak ahead to a more meaningful matchup in week nine.

But this Columbia team is not like all others. Two weeks ago, the Lions gave Dartmouth a real scare and fought to a 13-9 loss. Last Saturday, Columbia pulled out a 17-7 victory over Yale in New Haven, the program’s first Ivy League win since 2012.

Traditionally the Ancient Eight cellar-dwellers, the Lions seem to have found a new sense of fight.

“When you have a team that’s struggled mightily for such a long time, it’s amazing how you can go from the bottom of the mountain to the top so quickly,” Murphy said. “From an emotional standpoint, the same thing can happen. You can become believers very quickly.”

Some of this may be attributed to a change at the top. Longtime Penn coach Al Bagnoli, who ranks second all-time with 113 Ivy wins, took over the Columbia program in February.

“I feel like there’s a different atmosphere with coach Bagnoli there,” said senior wide receiver Seitu Smith. “They’re a little tougher, a little more sound in their technique.”

But chalking up the team’s apparent newfound competitiveness to coaching risks belittling the strides that players have made on the field. The Lions boast the third-best scoring defense in the Ivy League and rank first in pass defense, surrendering just 201 yards per game to opposing quarterbacks.

Junior linebacker Keith Brady has recorded a team-high 39 tackles. In the trenches, senior Hunter Little leads Columbia with four sacks on the year, more than any individual Crimson defender.

In 12 quarters against offenses from Dartmouth, Yale, and Princeton offenses, the Lions’ defense surrendered just two touchdowns. This feat would have seemed impossible a year ago.

“They have become, really overnight, a really, really good defense,” Murphy said. “It’s not bells and whistles, it’s not mirages, it’s not x’s and o’s, although they’re extremely well coached. Their front seven is really legit.”

“Last year’s Columbia is definitely not the same as this Columbia,” added senior defensive back Asante Gibson.

While the defense has turned in some commendable performances, the Columbia offense has failed to flip the script of previous seasons through seven games.

Quarterback Skyler Mornhinweg has thrown for just three touchdowns this season; Harvard senior Scott Hosch has tossed 14. The Lions are averaging 113 yards of team rushing per outing; Crimson senior Paul Stanton posts nearly 100 yards per game on his own. Columbia averages 267 yards of weekly total offense; a typical day of work for Harvard consists of 489 yards.

Suffice to say that squaring off against the staunch Harvard defense, which ranks first in the FCS with 8.6 points allowed per game, is not a matchup that bodes well for Columbia.

It’s rare for the Crimson, winners of 21 straight, to suit up against a Columbia team that has a one-game winning streak. Harvard’s mission on Saturday is to make sure that streak doesn’t double.

“[Columbia thinks] if they can beat Yale they can play with Harvard,” Smith said. “But we’re going to show them that’s not the case.”

–Staff writer David Steinbach can be reached at david.steinbach@thecrimson.com.