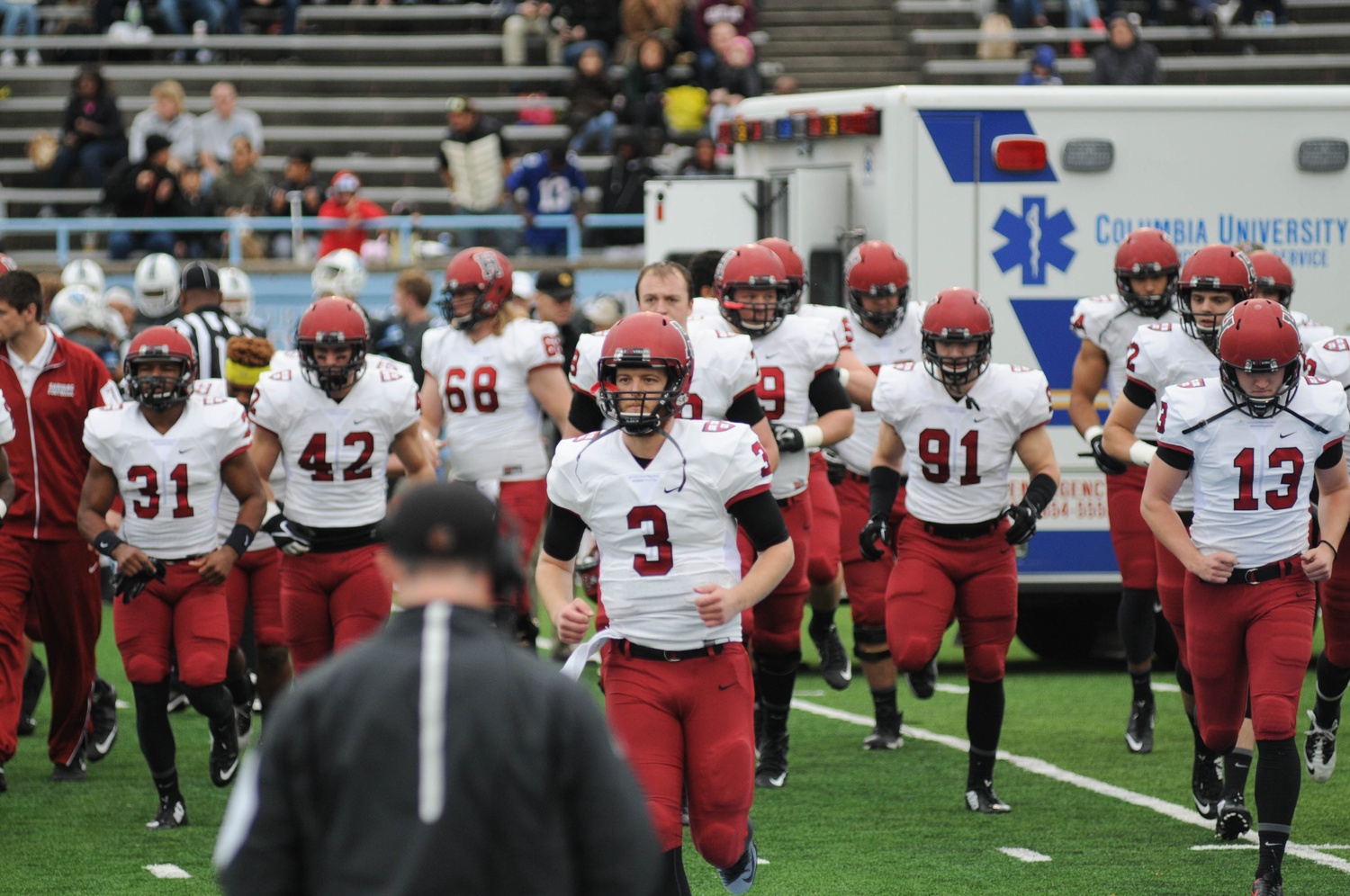 On a day when the ground game never got going, the Harvard football team resorted to the air.

In particular, senior quarterback Scott Hosch turned to his reliable duo of threats—one on his way out and the other just starting to make a name for himself.

Senior tight end Ben Braunecker and freshman wide receiver Justice Shelton-Mosley paced the Crimson throughout the contest, accounting for over two-thirds of the team’s total offense en route to a 24-16 victory over Columbia in New York.

Braunecker finished with 130 receiving yards, including a 53-yard touchdown catch on a corner route when his defender stumbled in coverage. A waltz into the end zone gave Harvard its first score of the day and capped a drive in which he recorded 75 receiving yards.

The senior’s play was noteworthy in its own right. But Shelton-Mosley still found a way to steal the show.

Demonstrating an explosiveness that has bedeviled opposing coverage units throughout the season, the freshman contributed 131 receiving yards, a 26-yard touchdown reception, and an 86-yard punt return for a score.

Shelton-Mosley showcased his ability to make defenders miss on both touchdowns. Late in the second quarter, Hosch found the wideout on a short look that seemed designed only to pick up a first down. But the freshman fooled two defenders with a sharp cut to the sideline and beat them to the pylon to give his team six points.

The punt return may have represented an even more impressive display. On the first play of the fourth quarter, Shelton-Mosley fielded a kick on his own 14-yard line. After nearly disappearing into a clump of bodies along the left sideline, the freshman broke two tackles and forced his way into the open field. He was gone, and the Crimson suddenly had a 24-3 lead.

Once again, Shelton-Mosley had created something out of nothing.

“He’s an explosive, dynamic kid that’s a legitimate Pac-12 player,” Columbia coach Al Bagnoli said. “That’s what you need. You need a couple of those guys that are different.”

In each of the season’s first seven games, Harvard finished with at least 100 yards of team rushing. On Saturday, the total was only 55.

With a struggling run game and the next highest receiver totaling just 37 yards, the burden fell to Shelton-Mosley and Braunecker to pick up the slack. With Shelton-Mosley leveraging his speed to spread the field and Braunecker finding holes in coverage through his physicality, Columbia had no answer for the duo all game.

Featuring a new coach and redesigned uniforms, the 2015 version of Columbia (2-6, 1-4 Ivy) gave the Crimson (8-0, 5-0) a fight made all the more remarkable considering the program’s recent struggles.

Much of the responsibility for the turnaround likely rests with the former instead of the latter.

In the final three years of former Lions coach Pete Mangurian’s tenure, Harvard coasted to a trio of victories over the blue-and-white. The combined score: 148-0.

2015 marks the first season for Bagnoli, a longtime Penn head coach, at the helm of the Columbia program. Not only did the scoreless streak end, but the Lions also proved they could play with the best of the Ivy League.

With Harvard holding a 24-3 lead in the fourth quarter, the game seemed out of reach. Columbia, however, would not go down without a fight.

Lions quarterback Anders Hill waited out a blitz and connected with a wide-open Cameron Dunn for a 51-yard touchdown pass. Two Crimson three-and-outs later, Columbia capped a 68-yard drive with a three-yard strike to John Hunton in the front of the end zone on fourth down.

The score was suddenly 24-16. The Crimson would hang on, but not before receiving a scare. In addition to holding senior running back Paul Stanton to his lowest rushing total of the year, Columbia posted five more first downs than Harvard, 25 more yards of total offense, and won the time of possession battle.

The formerly lowly Lions gave the Crimson its second closest game of the season.

“They had a lot more fight in them, it seemed like this year,” Hosch said. “They really were stout in the run defense and just things like tackling. They were very sound fundamentally.”

In addition to representing Harvard’s 22nd consecutive victory, Saturday featured a battle between two of the most successful coaches in Ivy League history.

Crimson coach Tim Murphy and Bagnoli have faced off every year since Murphy took over in Cambridge in 1994. Bagnoli, who captured nine championships in his 23 seasons with Penn, has a 12-10 record against Murphy.

“We’ve always had great mutual respect, obviously been locking horns for a couple of decades plus,” Murphy said. “It was a little weird seeing him in Columbia blue initially, but they’ve already had an impact…. They’ve got the kids believing.”