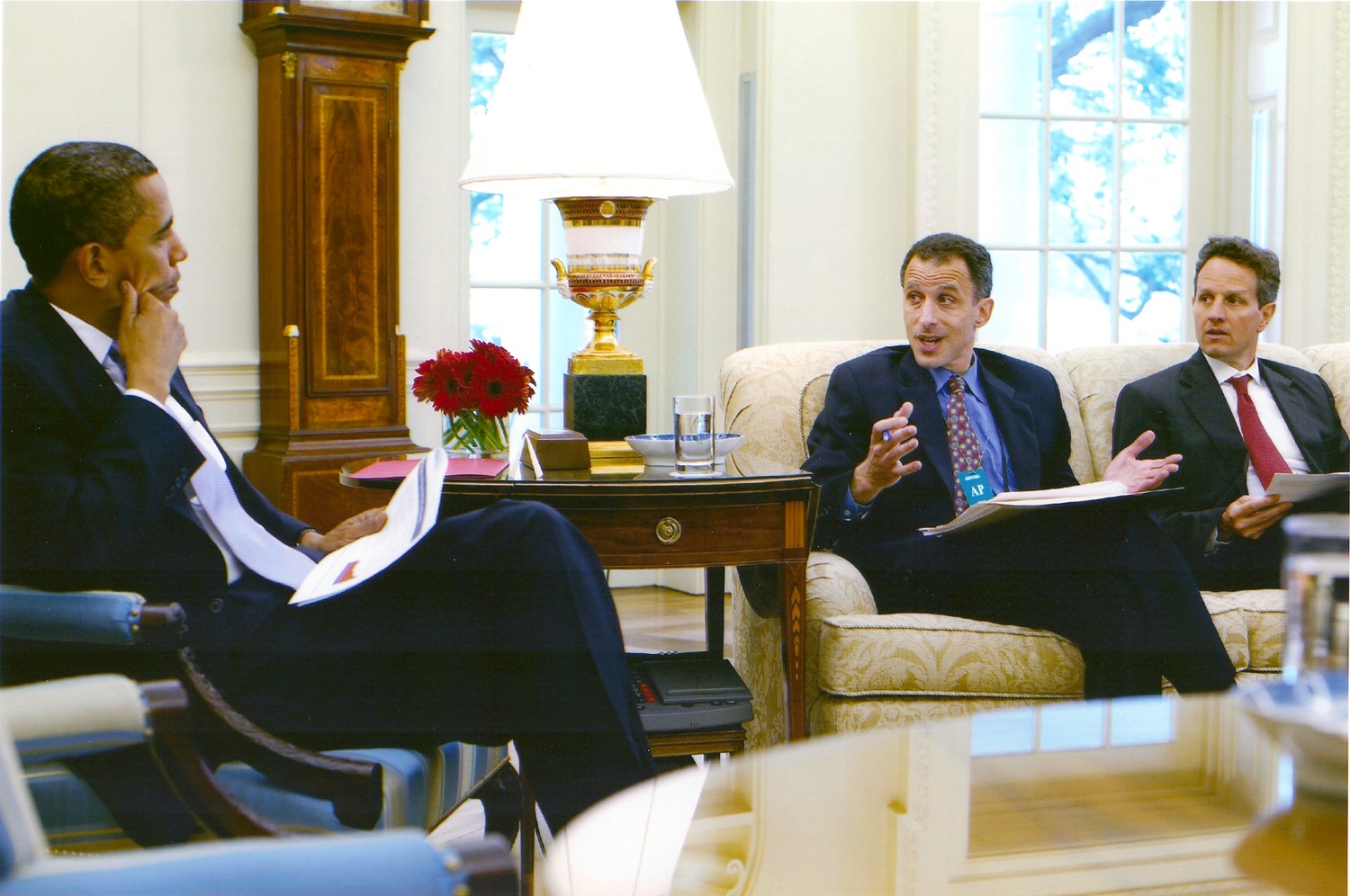 Jeremy C. Stein, pictured here in a previous meeting with President Barack Obama at the White House in 2009, is a current professor in the Economics Department. Stein was an advisor in the U.S. Treasury Department after the 2008 financial crisis. By Courtesy of Jeremy C. Stein
By Menaka V. Narayanan, Contributing Writer

On paper, economics professor Jeremy C. Stein can come off as intimidating.

A research economist at the forefront of his field, an advisor in the U.S. Treasury Department following the 2008 financial crisis, and—most recently—a governor on the Federal Reserve Board, Stein’s list of accomplishments is formidable.

But take a step into his office, and any traces of initial intimidation dissolve with one look at his welcoming smile. Talk to him for a few minutes, and it becomes clear that his most natural profession is that of an enthusiastic mentor.

Stein’s 15 years as a Harvard faculty member have been interrupted recently by a fair amount of time off during which he pursued opportunities away from the classroom. But after these breaks, he always returns to his office at the Littauer Center for Economics, equipped with a whole new palette of experiences to recolor his curriculum.

Stein’s long career in economics began in his undergraduate days at Princeton University, where he was an economics major. For a few summers, he worked at a small savings and loan company in New Jersey. During his senior year, Stein was drawn to a PhD-level finance course taught by economics professor Albert “Pete” Kyle.

“I was woefully in over my head in the course,” Stein said. “I was probably the only undergraduate in his class, and [Kyle] went out of his way to be nice. That makes a huge difference.”

Stein said Kyle was an influential mentor, encouraging Stein to apply to graduate school—a decision that, even today, is the less-trodden path for undergraduates pursuing finance. During graduate school, Stein interned at the Federal Reserve for a summer, unaware that he would one day be sworn in as a governor in that very place.

After serving as an assistant professor in finance at Harvard Business School and then teaching at Massachusetts Institute of Technology’s Sloan School of Management for 10 years, Stein joined the Harvard economics department in 2000. In that position, Stein said he has appreciated the flexibility with which he can mold his own curriculum.

“The great thing here is I can teach a course that’s the stuff I know the best, and I’m able to be most enthusiastic and excited about, and still draw an audience of fifty people,” Stein said.

Stein noted that he enjoyed the small size of his undergraduate classes, an environment in which he could get to know students on a more personal level. Benjamin A. Scharfstein ’16, a student in Stein’s class last spring, described the thoroughness and patience with which Stein interacted with his students.

“He listened to what everyone said, and he was very open to having engaged conversations,” said Scharfstein, a former Crimson editor. “And even if what the person said was off-topic or unrelated, he would really engage with that and try to push back.”

In addition to teaching undergraduate and PhD classes, Stein also served as an advisor for doctoral students. These students—a number of whom now teach at Harvard Business School—also praised Stein’s knack for engaging with students.

“You can have an objectively terrible idea, and go and talk to him about it, and he will reshape it into the Venus de Milo,” said Adi V. Sunderam, an assistant professor at the Business School and Stein’s former advisee. “He is very good at taking some deep kernel of an idea that you didn’t even realize that you had, isolating that piece, and throwing out the less relevant parts.”

IN THE DEPTHS OF THE CRISIS

In late December 2008, President Obama had just been sworn in, the economy was in a downward spiral, financial markets were in shambles, and Stein received an urgent phone call from Lawrence H. Summers, a former University president who was then the Director of the Obama administration's National Economic Council in the Obama administration.

Summers asked Stein to help with a team working on the bank policy during the country’s worst financial crisis in decades. After his request to take a semester-long leave from Harvard was granted, Stein flew down to D.C. to assist in a six month-long group effort to contain the banking crisis. For Stein, the endeavor was both daunting and exciting.

Samuel G. Hanson, an assistant professor at the Business School and former advisee of Stein, also took a break from his graduate studies in 2009 to work in the Treasury Department alongside his mentor.

“Getting the opportunity to work side by side with Professor Stein and see the way he approached these problems was just tremendously useful and rewarding,” Hanson said. “I’ve always been impressed with the way that he approaches policy questions with an open mind.”

Stein’s career in economic policy took an even greater leap in 2011 when President Obama nominated him for a governor position on the seven-member Federal Reserve Board.

“There was a part of me I think that had always hoped that I would get the chance to do something like this,” Stein said. “And it was great. It was probably the two best years of my professional life.”

While on the Federal Reserve Board, Stein worked not only with monetary policy but also with post-crisis bank regulation and prevention. Stein resigned two years later to preserve his tenured professorship at Harvard, looking forward to applying his new knowledge to the classroom.

“Part of the reason I was very excited to come back and to teach this class was to try to put some of this into the course.” Stein said.

BACK HOME IN THE CLASSROOM

In the fall 2014, Jeremy Stein returned to his office in Littauer after his two year hiatus and traded shaping economic policy for lecturing to students, ready to teach a revamped version of his undergraduate economics course.

“On the one hand, being away is very good...the topics I worked on were incredibly interesting and good fodder for getting ideas I wanted to work on,” Stein said. “On the other hand, you’re just away from the game for a couple of years, so it’s like anything, you get a little rusty.”

Sunderam, his former advisee, noted the benefits of being taught by a professor with Stein’s amount of hands-on finance experience.

“Having the background of having really been there fighting in the trenches gives you a little bit more insight into what are the most relevant issues and what kind of problems should I be thinking about as first order,” Sunderam said. “Jeremy was a very, very good economist before any of this stuff happened, but I think if anything, those experiences help.”

Stein said his biggest takeaway from working during the financial crisis was that he learned traditional individualistic approaches to finance do not always result in macro economic sustainability. Stein worked on incorporating this idea into his undergraduate finance course curriculum.

“I think I used to just think about the individual markets a little bit more in their own right,” Stein said. “I think all of us, or many of us, now try to think a little bit more of what you might call a systemic perspective.”

Hence, the title of his new undergraduate class: The Financial System and the Central Bank. Scharfstein said he valued Stein’s perspectives and opinions on hotly contested issues.

Stein explained how despite his efforts to attract a broad range of students, including those with an interest in policy, the class tended to draw “hard-core finance banker types,” due to the high level of readings and concepts.

“I always wanted [on] the margin for the class to be a little bit bigger and a little bit more inclusive,” Stein said. “I would love to draw people who are a little bit outside of the standard issue econ thing.”

Stein’s positive disposition can be seen in every facet of his life, whether he is presenting a lecture, giving research advice, or speaking in a high profile meeting.

“Like many Harvard faculty, [Stein] is very smart. He’s very optimistic, which is a little bit less common,” Sunderam said. “They call economics the dismal science, but he’s the happiest, most optimistic person I know.”

A previous version of this story misstated the term in which Benjamin A. Scharfstein ’16 took Jeremy Stein's class. It was spring 2015.