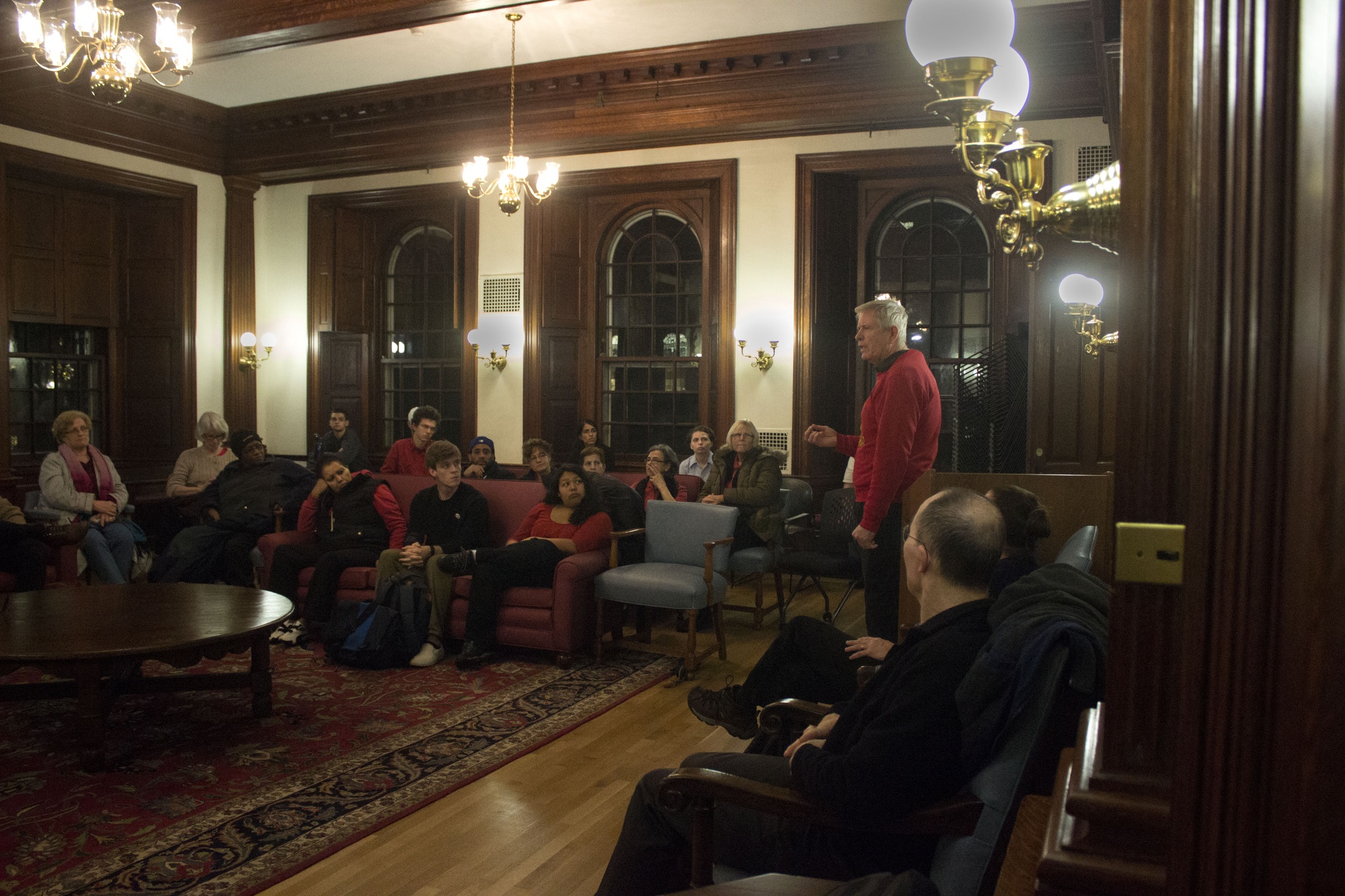 HUDS employees, Harvard students, and other Harvard affiliates gathered last Wednesday to talk about the proposed changes to the worker health insurance plan. The event was sponsored by the Student Labor Action Movement. By Savannah I. Whaley
By Emma K. Talkoff, Crimson Staff Writer

A group of Harvard workers from across several of the University’s unions announced the formation of a “coalition” of students and workers at a rally last week in light of Harvard University Dining Services workers’ contract renegotiations, set for the spring. 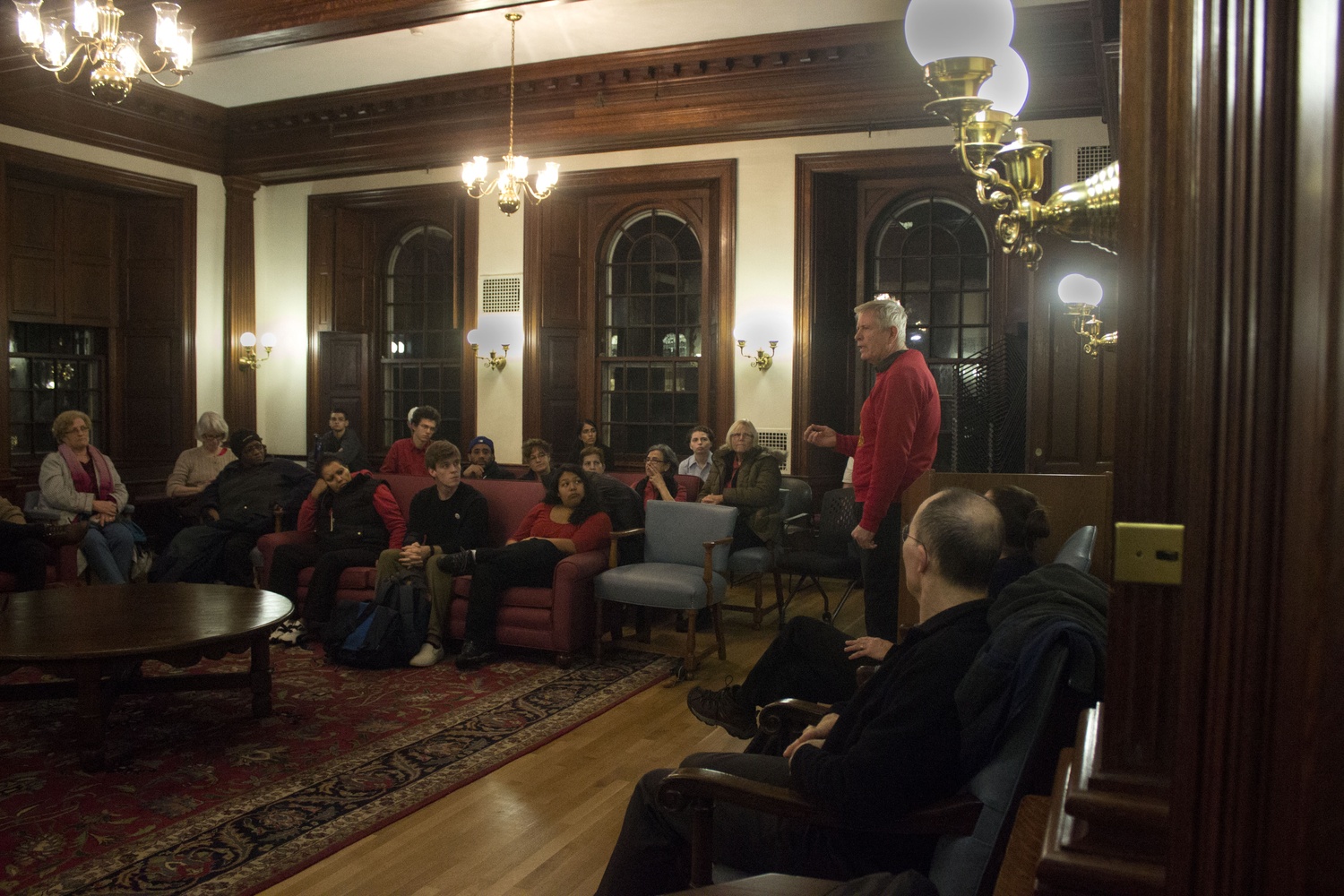 HUDS employees, Harvard students, and other Harvard affiliates gathered last Wednesday to talk about the proposed changes to the worker health insurance plan. The event was sponsored by the Student Labor Action Movement. By Savannah I. Whaley

Students and workers aimed for the event to “make everyone on campus aware” of potential issues involved in the upcoming negotiations, like health care, said Noah R. Wagner ’18, a member of Student Labor Action Movement who participated in the rally.

Campus Services Vice President Meredith L. Weenick ’90 said in an emailed statement that, with negotiations set to commence in seven months, the University is prepared to “negotiate in good faith” with Local 26, the union that represents HUDS workers.

Students from across a variety of organizations including the Student Labor Action Movement, the Harvard Islamic Society, and the Palestine Solidarity Committee gathered inside the Phillips Brooks House last week to hear testimonials from HUDS workers, who expressed concerns over possible changes to health care, citing cost sharing as a major motivation for the speak-out. The students and workers then marched across the Yard to Massachusetts Hall.

Some Harvard security guards, who are organized under the Harvard University Security, Parking and Museum Guards Union, as well as members of the Harvard Union of Clerical and Technical Workers, were also present at the event, Wagner said, adding that organizers hope future rallies will include members of Harvard’s faculty, as well.

“We need to understand that it’s not just workers who are fighting for their own interests and students who are standing with them,” Wagner said, emphasizing the impact that changes to workers’ contracts can have on all members of the Harvard community.

“We have a lot of natural allies out there,” Adams House dining staff member and speak-out organizer Edward B. Childs said at the rally.

“We’re going to make this an issue,” he added. “That’s what we want to do with the students...help form this coalition that will not only build everything on campus but get the word out.”

Brian Lang, president of Local 26, said that potential changes to the union’s health care plans, which featured heavily among the comments at last week’s event, will be a “focal point” of the upcoming negotiations, adding that his goal is to prevent changes to health care plans that would result in cost shifting towards workers.

Lang’s concerns come in the wake of months of contentious health care debates at Harvard. In fall 2014, the University proposed a restructuring of health care benefits for non-union employees amidst backlash, and later added other benefits plan options. Health care is also a point of contention in the ongoing contract renegotiation between the University and the Harvard Union of Clerical and Technical Workers, now more than two months past their deadline.

Lang said that he anticipates “a very difficult set of negotiations” if the union’s concerns about cost shifting are not addressed.

According to Weenick, the University will continue to work with the union to “achieve an agreement that ensures fair and competitive wages, health care and other benefits, while also supporting the University’s primary mission.”

Students and workers hope to host more joint demonstrations in the coming months as the negotiations approach, Wagner said.

“This is definitely a group that plans to demonstrate our shared interests and desires to see worker health and public health protected,” Wagner added. “This is just the very beginning of the effort to make everyone on campus aware of their connections to this issue.”

—Contributing writer Madina Radjabova contributed to the reporting of this story.

—Staff writer Emma K. Talkoff can be reached at emmatalkoff@college.harvard.edu.