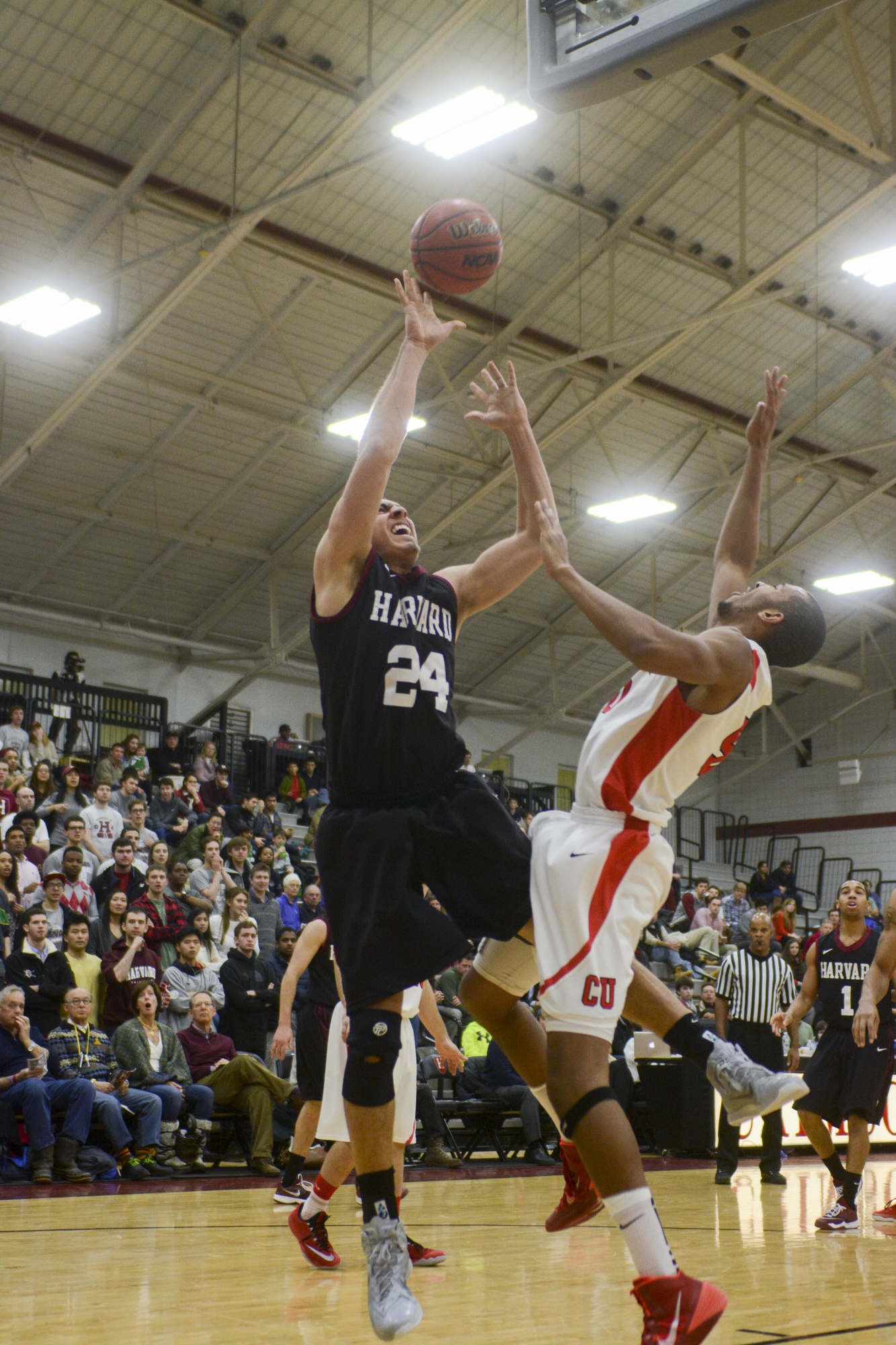 Senior Jonah Travis contributed seven points and six rebounds for the Crimson off the bench against Cornell in a 61-40 victory for Harvard. By Robert F Worley
By Andrew Farber, Crimson Staff Writer

Despite a poor offensive performance in the first half, the Harvard men’s basketball team (17-5, 7-1 Ivy) won handily against Cornell (12-12, 4-4) thanks to a big run to open up the second half.

After draining seven threes in the first half of Friday night’s win over Columbia, the Crimson went 0-for-8 from beyond the arc in the first half against Cornell. Senior Wesley Saunders was personally responsible for half of those misses, as he finished the first half without a single point.

In what would turn into a 31-minute drought dating back to last nights contest, Harvard simply couldn’t buy a basket from deep for the beginning of Saturday’s matchup.

“I think a lot of us took good shots,” sophomore guard Corbin Miller said. “I remember one in the corner that was wide open, it just didn’t go down.”

That was the storyline for Harvard in the open half; the Crimson’s offensive woes, especially from three, were not a product of poor possessions or stagnant players, but rather an inability to simply connect on shots.

Nonetheless, Harvard stayed the course. After missing his fifth three point attempt of the game to open the second half, Saunders promptly knocked down the Crimson’s first three of the game just two possessions later.

From there, it was as if the basket seemed to get wider and wider for the home team. In the second half, Harvard went 7-of-13 from three including two from both Miller and junior captain Siyani Chamber.

“Being here at home, our focus coming out was just to continue to play tough defense, attack on offense, and trust that shots were going to fall,” Miller said.

HOLDING DOWN THE FORT

While Harvard’s offense may have come alive in the second half, that was by no means the case on the defensive end. Instead, the Crimson’s stifling defense was omnipresent throughout the entire contest.

Harvard set the tone from the opening possession. After Cornell won the tip off, junior Agunwa Okolie raced back and sent a lay up from Cornell senior Galal Cancer flying into the stands.

“The key to this game for us was our defense,” Head Coach Tommy Amaker noted. “When you see the numbers and it kind of shows you that our defensive pressure and ability to get the ball off the backboard allows us to play up the floor.”

“We kept our defensive intensity up,” Amaker said. “I thought that was the key for us at the half.

In the second half, it was more of the same. A combination of solid interior play by Okolie, Saunders, sophomore Zena Edosomwan combined with a collective defensive rebounding effort forced Cornell to settle for low percentage shots. Saunders alone was responsible for 10 defensive rebounds, as he fell just short of his career high of 12.

DON'T BLINKAs the clocked expired in the first half, junior captain Siyani Chambers broke down his defender to hit the layup and send the Crimson into the locker room trailing 24-21.

Previously, Harvard’s offense had struggled. No fast break points, five turnovers, and 31 percent shooting from the floor character a forgetful first half for the Crimson on offense.

Nonetheless, things changed ever so quickly for the home team. Saunders opened up the second half with five straight points, hitting a tough bank shot from the left side and then draining a three on the next possession.

“I just wanted to come out and give the team an energy boost and lead the way,” Saunders said. “That was a good start and my teammates just found me, they had confidence in me to keep giving me the ball.”

In just 1:12, Cornell had lost its lead that it had worked the entire first half to build. But things would only get worse from there for the Big Red.

Over the next eight minutes, Harvard would go on a 24-2 run, extending the lead and making it a 45-26 game. In what seemed like the blink of an eye, the Crimson had taken what looked like a potential upset and turned it into a blowout.

During that run, Chamber’s ability to push the pace and find both Miller and Saunders in transition was crucial in breaking down the Cornell defense.

—Staff writer Andrew Farber can be reached at andrewfarber@college.harvard.edu.