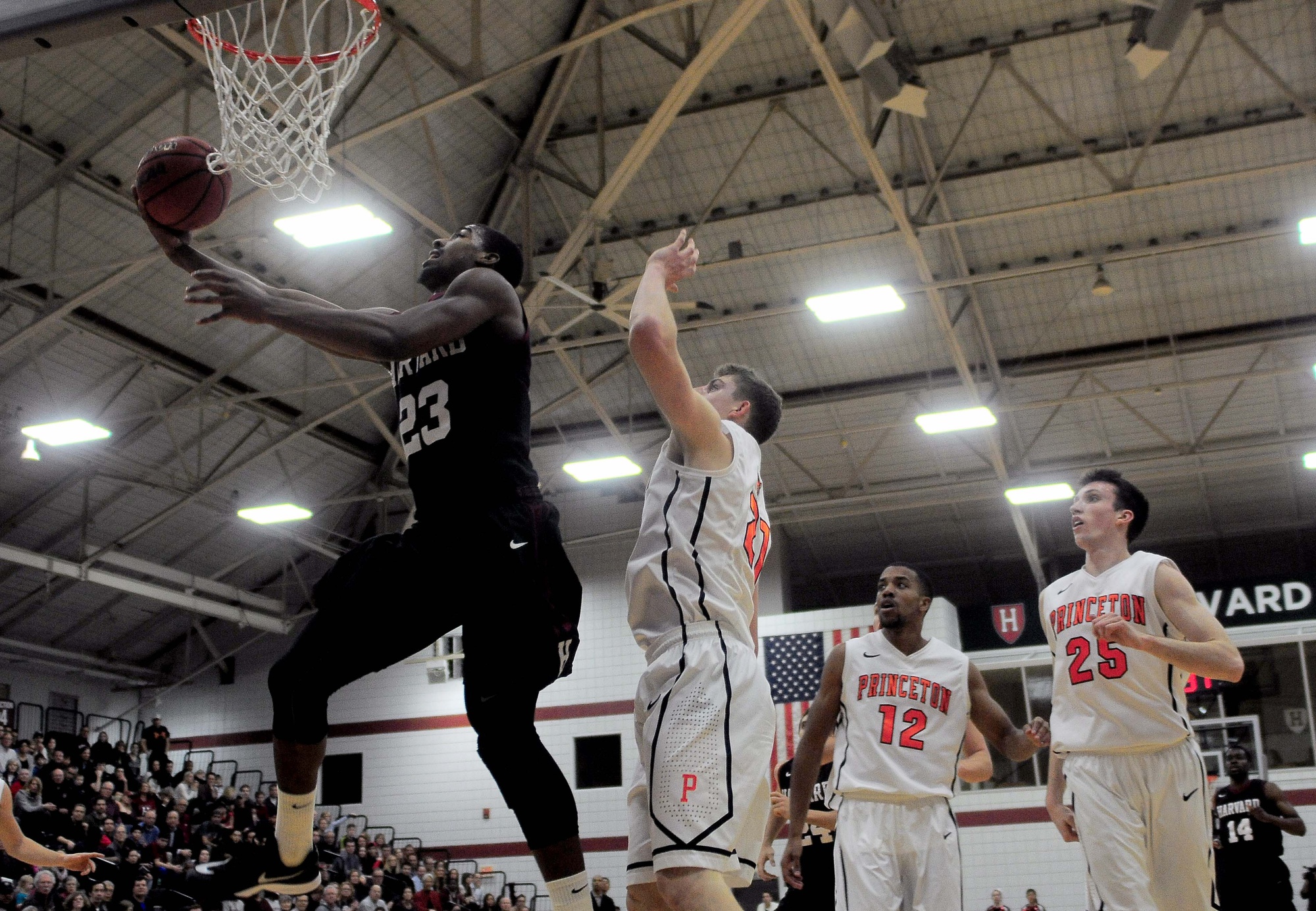 Despite forcing 18 turnovers, the Harvard men’s basketball team (19-5, 9-1 Ivy) still found itself locked even with Princeton (12-13, 5-4) at 53-all with just 2:50 remaining in Saturday night’s contest. In the second half, the Crimson had overcome what was once a 12-point deficit, awakening a sold-out Lavietes Pavilion crowd.

As senior forward Jonah Travis pressured the ball, an errant pass resulted in a Harvard steal, as junior co-captain Siyani Chambers collected the ball, sped up the court, and laid the ball it in for the lead.

“Coach [Tommy Amaker] still emphasizes playing our defense even against people that are going to back cut and to trust your help side,” Chambers said. “I was one pass away and denied like we’re supposed to do.”

Then, after two made free throws from senior wing Wesley Saunders on the ensuing possession, Chambers, who finished with 12 points, put the game away. The co-captain crossed over, side stepped, and drained the jumper to put the icing on the cake with 46 seconds remaining.

“We were supposed to hand off and get it to Wes, but he got trapped,” Chambers said. “I just pulled up and was lucky enough to make the shot…. It’s a shot that I’m confident in.”

Though Harvard would go on to win 63-55, the Tigers gave the home team all that it could handle. Princeton went on a 14-2 run in the first half, holding the Crimson for nearly six minutes without a field goal in order to take a 37-29 lead into the break.

“They were very efficient and sharp,” Amaker said. “We weren’t able to make a lot of baskets that were around the rim, and we missed a lot of things.”

The famed Tiger offense caused problems for Harvard’s defense all night, as backdoor cuts to the basket resulted in several uncontested Princeton layups. On top of that, a balanced scoring attack and seven made three-pointers kept the Crimson’s defense from cheating on any of the backdoor passes.

“We had a lot of little breakdowns,” Saunders said. “We played solid defense for the first part of the clock it seemed like, and then we would just have some kind of lapse and bail them out with an easy shot.”

Saunders led all scorers with 23 points, as the senior wrecked havoc in the lane. Nonetheless, in the first half, Saunders was just 4-for-11, creating space for himself but missing shots that have become customary makes for the reigning Ivy League Player of the Year.

“In the first half, I was just missing some shots that I usually make,” Saunders said. “I knew though that’s why they play two halves, so I just wanted to refocus for the second half and hit some shots.”

That is exactly what Saunders did. From the beginning of the second half, Saunders took over. After a steal on the Tigers’ opening possession, Saunders missed a jumper, grabbed the offensive board, and finished the layup as he drew the foul. From there, the Crimson offense came alive.

However, with the rest of the team finally getting open shots to fall, sophomore guard Corbin Miller seemed to have the shades drawn on him all night. After dropping 19 points in Harvard’s win at Princeton earlier this year, Miller struggled to find an open shot and was face guarded all night.

“They were attached to [Corbin] every time he was at the scorer’s table ready to check in,” Amaker said. “They did a terrific job limiting his opportunities to catch and shoot…[but] we found other ways.”

However, the combined effort of frontcourt stalwarts co-captain Steve Moundou-Missi and Travis (22 combined points) was more than enough to make up for Miller, as the Crimson scored 34 points in the second half.

Meanwhile, 130 miles away in New Haven, Conn., Columbia took down Yale, 56-50, giving the Bulldogs their second league loss of the season. As a result, Harvard gained sole possession of first place in the Ancient Eight with its season-high eighth straight win of the year.

—Staff writer Andrew Farber can be reached at andrew.farber@thecrimson.com.