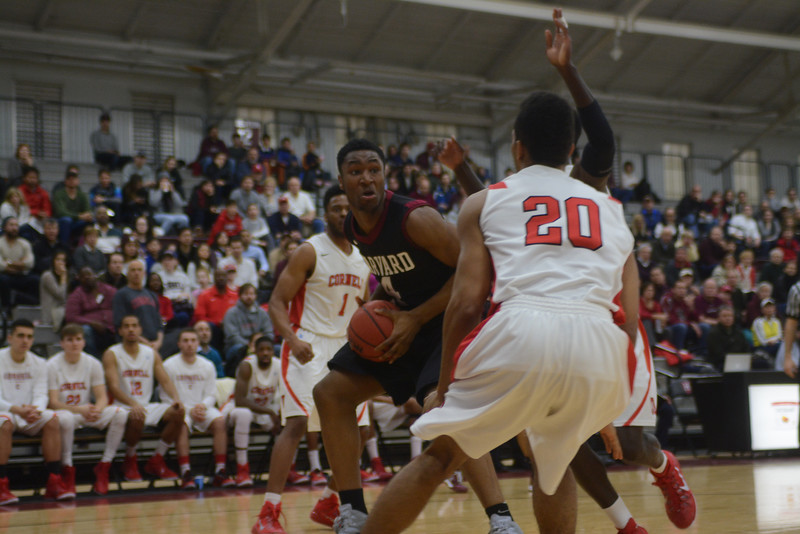 Sophomore forward Zena Edosomwan and the Harvard men's basketball team exploded for 40 points in the second half of their home contest against Cornell on Valentine's Day. By Robert F Worley
By Andrew Farber, Crimson Staff Writer

­Just four weeks ago, the Harvard men’s basketball team (19-5, 9-1 Ivy) walked out of Lavietes Pavilion, its home court, and into an air of doubt. For a team that had been placed by the Associated Press in the preseason Top 25—the first time an Ivy League team garnered the honor since the 1974-1975 season—losing in Cambridge to Dartmouth was an upset, to say the least.

Fast-forward one month. The Crimson has rattled off eight straight wins, swept Penn and Princeton, and now sits alone atop the Ancient Eight.

Though Harvard has already beaten both Columbia (13-11, 5-5) and Cornell (12-14, 4-6), penciling in another perfect weekend for the Crimson would be ill-advised.

Two weeks ago, Harvard handled the Big Red. Dominating on the glass and in the paint, the Crimson turned a one-possession deficit at the half into a 21-point blowout win.

Stifling Cornell to just 23.9 percent shooting from the floor, Harvard held senior Shonn Miller to just 10 points, an off-night for a forward that drops 16 a game.

“It’s a tough matchup because he plays on the base line yet has perimeter skills,” Crimson coach Tommy Amaker said of Miller on Wednesday. “He shoots the ball from three, and we will do the best we can.”

Miller will enter Friday’s contest hot off of a 27-point performance against Brown last weekend. As a result, if Harvard is able to once again contain Miller, scoring may once again be scarce for Cornell.

While Friday’s matchup may not appear so daunting, it is the game that will take place 24 hours later that could really test Amaker’s squad. The last time the Crimson traveled to New York City, it took two overtimes, 22 points from junior captain Siyani Chambers and captain Steve Moundou-Missi, and 19 points from Wesley Saunders in order to get the win.

“Our league is hard,” Amaker admonished. “And that second night is brutal.”

Facing statistically the best defensive team in the league, an already sold-out crowd at Levien Gymnasium, and a team hungry for revenge, Harvard cannot afford to fall behind early to the Lions.
Preventing that from happening will fall on the shoulders of junior swingman Wesley Saunders. Saunders is coming off a weekend in which he averaged 19 points, four assists, and seven rebounds, earning him his third Ivy League Player of the Week honor this year.

This season, the Crimson has gone how Saunders, its reigning Ivy League Player of the Year, has gone. While slow starts have plagued Harvard all year long, Saunders has emerged as a Superman figure with big second half performances to save the day.

“We have a couple of games where we haven’t played very well on the offensive end in the first half,” Amaker said. “We need some help and a spark, and our kids have dug in a lot deeper.”

Though Saunders has continually come to the rescue, it has been senior forward Jonah Travis that has sparked the Crimson off of the bench. After starting a couple of games at the beginning of the season, Travis has become a vital asset to Amaker off of the bench.

During Harvard’s current win streak, Travis is averaging nearly 8.75 points and 4.25 rebounds per game, all in the role of reserve. When the Crimson nearly squandered a 17-point lead against Columbia in their matchup earlier this season, the eight points from Travis off the bench in the second half alone proved to be vital.

“It always helps to have guys come in like that; the rest of us can feed off that energy,” sophomore shooting guard Corbin Miller said of Travis after a game against Boston College this year. “It is important that we have a player that can come in and do it for us. The rest of us definitely feed off that.”

Defensively, the key to stopping Columbia will be shutting down junior guard Maodo Lo. Lo dropped 22 points against Harvard the last time out, and the Berlin-native just posted a 53-point weekend over his last two matchups.

Amaker’s go-to for stopping high-scorers like Lo this season has been a combination of looks, including Saunders, Chambers, and Junior Agunwa Okolie.

With just four contests left in the season-long tournament that is the Ivy League, Amaker is not taking anything for granted.

—Staff writer Andrew Farber can be reached at andrew.farber@thecrimson.com.­