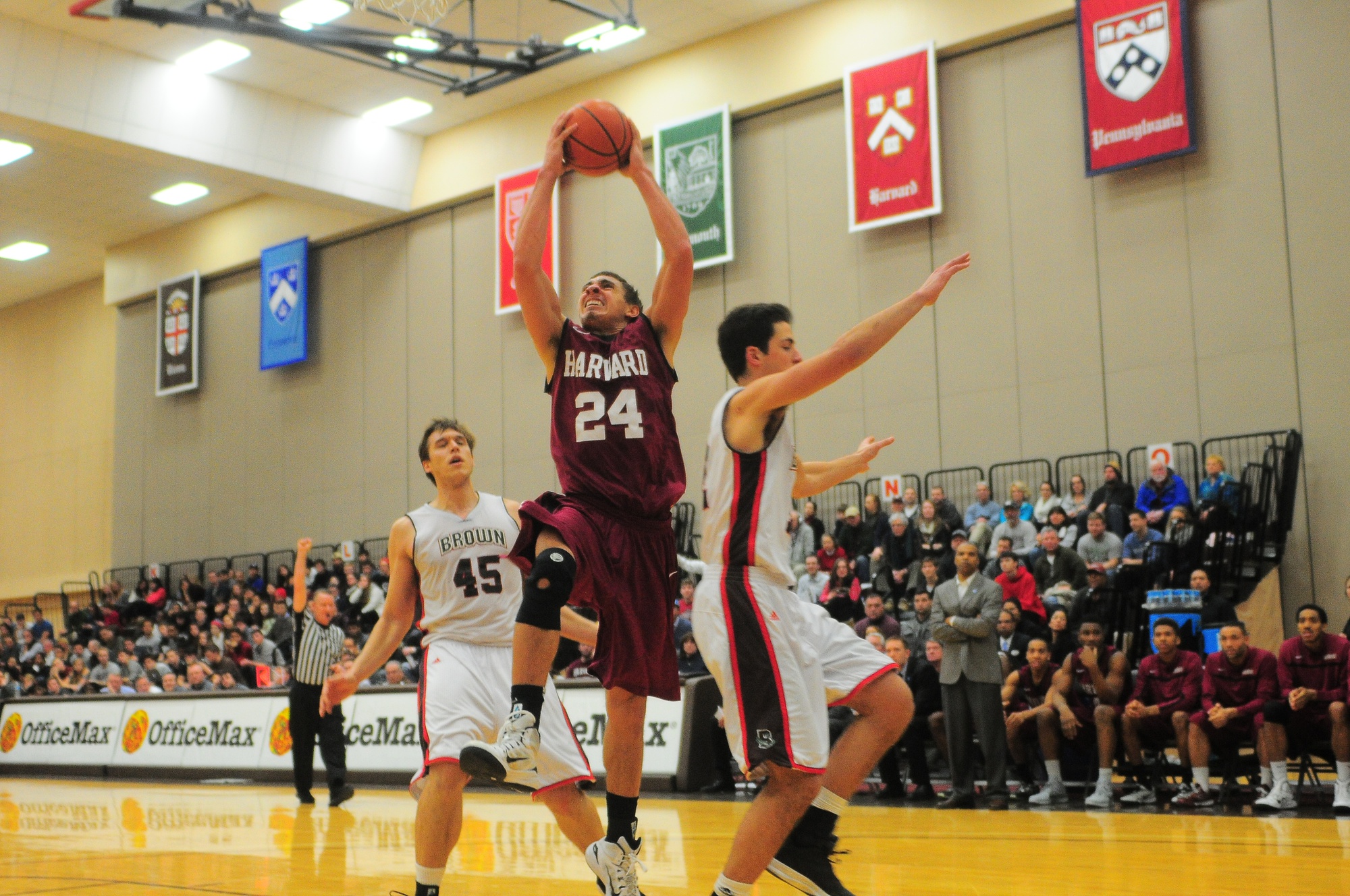 In addition to Wesley Saunders' 33 points, Harvard received significant contributions from its bench players, including senior forward Jonah Travis, who recorded 11 points of his own. By Robert F Worley
By Andrew Farber, Crimson Staff Writer

PROVIDENCE, R.I.—For the majority of the first 18 minutes of Friday night’s contest at the Pizzitola Sports Center, the Harvard men’s basketball team (14-5, 4-1 Ivy) nursed a double-digit lead over Brown (9-13, 0-5).

Nonetheless, just before the end of the first half, the Bears closed the gap to six. As Brown clawed its way back into the contest, the Crimson eventually relinquished the lead, needing overtime to earn the 76-74 win on the road.

Senior wing Wesley Saunders is one of the Ivy League’s biggest enigmas. The reigning Ivy League player of the year, Saunders has the ability to do it all on the floor, as he stuffs the stat sheet on a nightly basis.

Saunders can be elite in all facets of the game. Sometimes, it is his passing (see his eight dimes on multiple occasions); other times his rebounding (like his 12 boards versus Holy Cross); and even at times his defending (note his seven steals against Vermont). Friday though, he did what he does best: score.

“[Saunders] getting a double-double, getting that big layup—the offensive rebound and basket that…put the game in overtime for us [was key],” Harvard coach Tommy Amaker said.

From draining a three pointer off the opening whistle to scoring five of his team’s 12 in overtime, Saunders put on a show all night. The senior finished the night with 33 points (a career high) to go along with 10 rebounds, three assists, and three blocks.

As the shot clock wound down with eight minutes to play and his team down one, Saunders surveyed the floor. No one was open. Calmly, coolly, and with little effort, the senior knocked down a three with a man in his face as the buzzer sounded.

That would not be the last of Saunders’ buzzer-beating heroics.

With the Crimson trailing by two and only eight ticks left, Saunders showed why he is arguably the most prolific scorer in the Ancient Eight.

Saunders caught the ball on the left wing, slashed to the hoop, and missed the layup. Nonetheless, the veteran grabbed the rebound and put the ball right back up, tying the game as the clock expired.

While Amaker may only be able to put five players on the floor at a time, senior forward Jonah Travis and sophomore guard Corbin Miller have certainly made a strong case for adding two more.

“Jonah and Corbin are two kids that we consider our sixth and seventh starters,” Amaker said. “Jonah in particular being a senior for us, coming off the bench. That’s his role—to bring energy and effort from the post player position—and he’s done it incredibly well for us.”

Coming off the bench, Miller and Travis played 31 and 24 minutes, respectively. While Travis provided the offensive spark down low, Miller took over the reigns at the point while Chambers was on the bench.

“I think Jonah Travis and Corbin Miller are two huge keys to their success,” Brown coach Mike Martin said. “They come off the bench, and they accept their roles.”

Travis was a force on the offensive boards, repeatedly pulling down the rock and then drawing the ensuing foul. Travis’ ability to keep possessions alive clearly deflated a Brown squad that was feeding off of the energy of its home crowd. 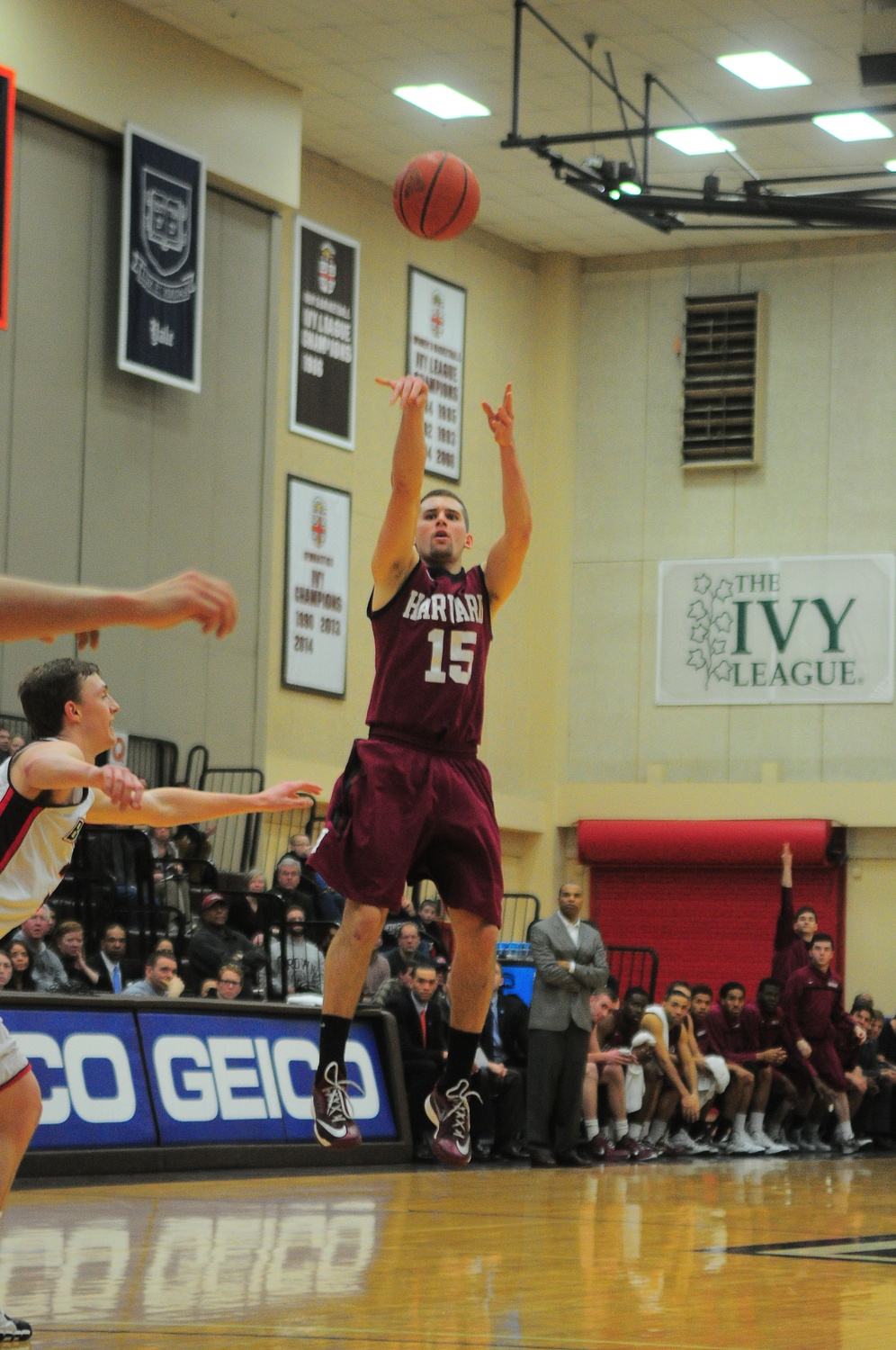 “Travis was huge,” Martin said. “He had some huge offensive rebounds, some huge baskets. [He] brings great energy [and] toughness to their team.”

The senior finished the night with 11 points, five rebounds, and two blocks.

Meanwhile, while Miller may have only finished with five points, his ability to run the point and only turn the ball over once was crucial. In addition, the sophomore knocked down two clutch free throws with 24 seconds remaining in overtime to put the contest out of reach.

For the opening 16 and a half minutes of the first half, Harvard had a big zero on its stat sheet: zero turnovers, that is. The Crimson finished the first half with only two turnovers, as junior co-captain Siyani Chambers took care of the ball masterfully.

While Harvard may have recorded no statistical “fast break” points in the first half, Chambers was constantly pushing the ball and finding secondary cutters in transition. Turnovers have plagued Harvard for much of the year, so Chambers’ ability to be a true floor general was a key component of its six-point lead heading into the half.

But something changed at the break.

Before it could even score a point in the second half, the Crimson had committed seven turnovers. Chambers was not even the culprit.

First, sophomore Zena Edosomwan coughed the ball up twice. Then, it was Saunders and co-captain Steve Moundou-Missi with back-to-back traveling violations.

Next, Edosomwan and Saunders each turned the ball over once more. Amid all the sloppy play, Harvard went six minutes without a point until Saunders knocked down a free throw.

Brown took advantage of Harvard’s miscues, as it was 41-37 before the Crimson could even manage a field goal. Harvard finished the night with 14 total turnovers but limited itself to only one in overtime.