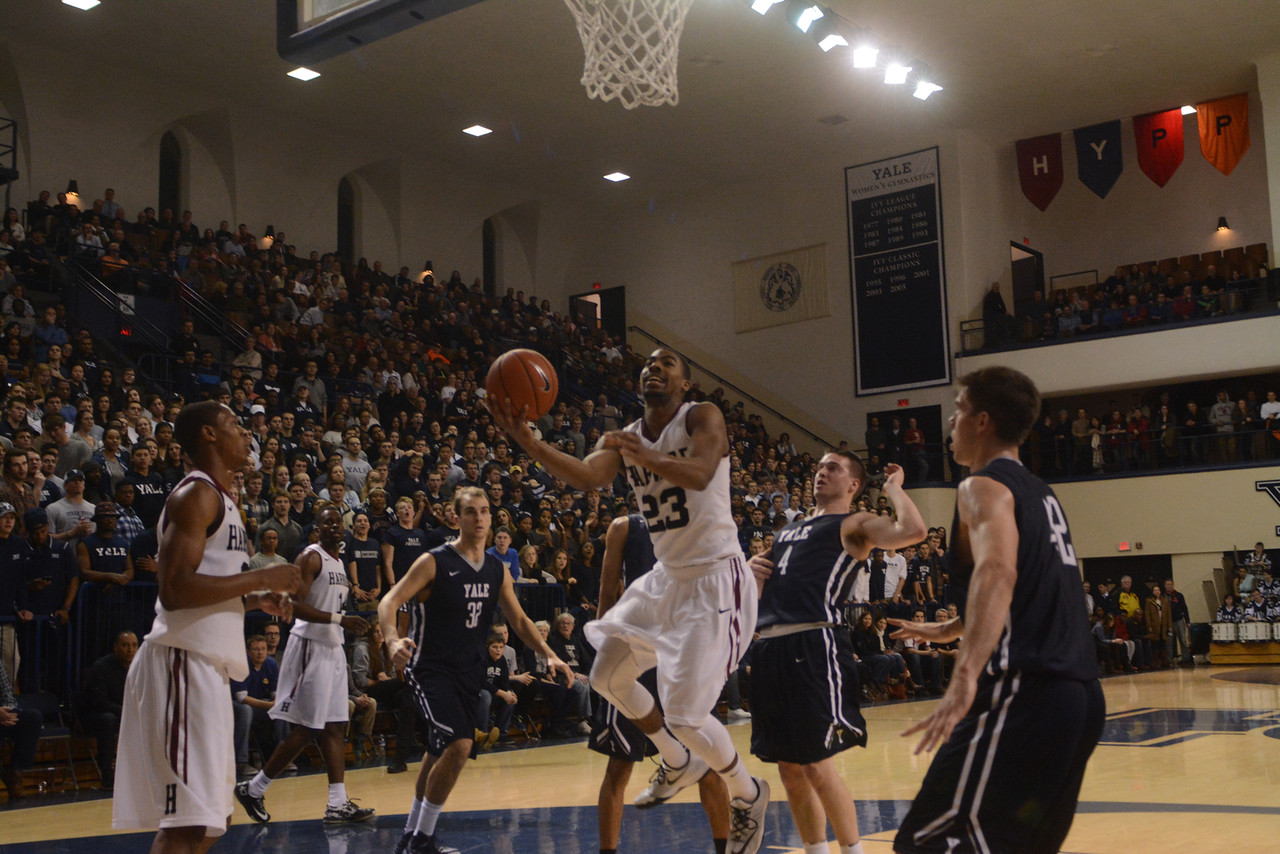 Harvard won both of its last matchups with Yale and Brown by a single bucket. By Robert F Worley
By Andrew Farber

As senior guard Wesley Saunders grabbed the ball with 10.9 seconds remaining and his team down just one point to Holy Cross back in November, the direction of Harvard’s season seemed to rest in his hands. As Saunders’s shot fell off the front rim and onto the hardwood of TD Garden, so too did Harvard’s No. 25 ranking in the Associated Press poll.

Just one month later, the Crimson surrendered almost all hope of an at-large bid to the NCAA tournament in back-to-back losses against No. 6/5 Virginia and Arizona.

Nonetheless, with a win this Friday night over Yale (21-8, 10-2) and then either a win the ensuing night or a Yale loss, Harvard (20-6, 10-2) will have a chance to become the first team in the nation to earn a spot in March Madness.

The winner of Friday’s contest at Lavietes Pavilion will earn at least a share of the Ivy League title. If either team can sweep the weekend, then the winner will be in sole possession of the conference’s automatic bid.

“Given the situation, it’s a big game,” Saunders said of Friday night’s contest. “Every game is a must win and determines whether we are going to go to the postseason or not. We don’t single out Yale as that game but given the situation…it’s win or go home.”

Last time out, despite holding the Bulldogs to 11 first half points, the game still managed to come down to the wire, as Saunders sunk two free throws with six seconds left to secure the 52-50 win in New Haven. On Friday, the Crimson will have the luxury of not only playing on their home floor, but also the backing of a sold out crowd.

In fact, tickets for Friday’s matchup sold so quickly that the Harvard Athletic Department has added additional seating by bringing extra bleachers in from Blodgett Pool. Though home court advantage will be valuable, the Crimson will have to shut down junior forward Justin Sears, Yale’s leading scorer and rebounder, whom Harvard held to just nine points and seven rebounds earlier this year.

“We are going to need a rotation of big guys up front,” Amaker said. “They are big and strong upfront and the best rebounding team in our league for a reason.”

That rotation will likely consist of captain Steve Moundou-Missi, senior Jonah Travis, and sophomore Zena Edosomwan, all of whom played double-digit minutes the last time the two teams faced. Senior center Kenyatta Smith, who has slowly returned from a leg injury, will also be a factor against Sears.

But even if Amaker’s squad can hand Yale a loss Friday, the Crimson’s quest for a fifth consecutive league title—the first since Penn’s run in 1978-1982—will be far from over.

Less than 24 hours after its rivalry matchup, Harvard will face another troubling opponent. Though Brown (13-16, 4-8) currently sits at seventh place in the Ancient Eight with no true postseason prospects, the Bears will look to play spoiler in Lavietes on Saturday night.

When the Crimson entered the Pizzitola Sports Center a month ago, Brown was 0-5 in the Ivy League and its leading scorer and rebounder, Leland King, had just left the program for personal reasons. Nonetheless, even with Saunders, the reigning Ivy League Player of the Year, scoring a career-high 33 points, the game went to overtime as Harvard squeaked out a 76-74 win.

Brown’s sophomore guard Tavon Blackmon, who dropped 25 points in the last matchup, wreaked havoc on the court all night, weaving through defenders and giving Harvard junior co-captain Siyani Chambers all he could handle. Blackmon’s health will be a key issue to watch for Saturday night, as he suffered a quad injury that limited his minutes last weekend.

Despite the trouble Brown gave Harvard earlier this year, Amaker has maintained that his team’s focus is the Bulldogs heading into the final weekend of the regular season.

“We can’t get two until we get one,” Amaker said.

While beating Yale is certainly the first and most crucial step to securing its fourth straight tournament bid, Harvard will have to win both matchups to keep its fate in its own hands.