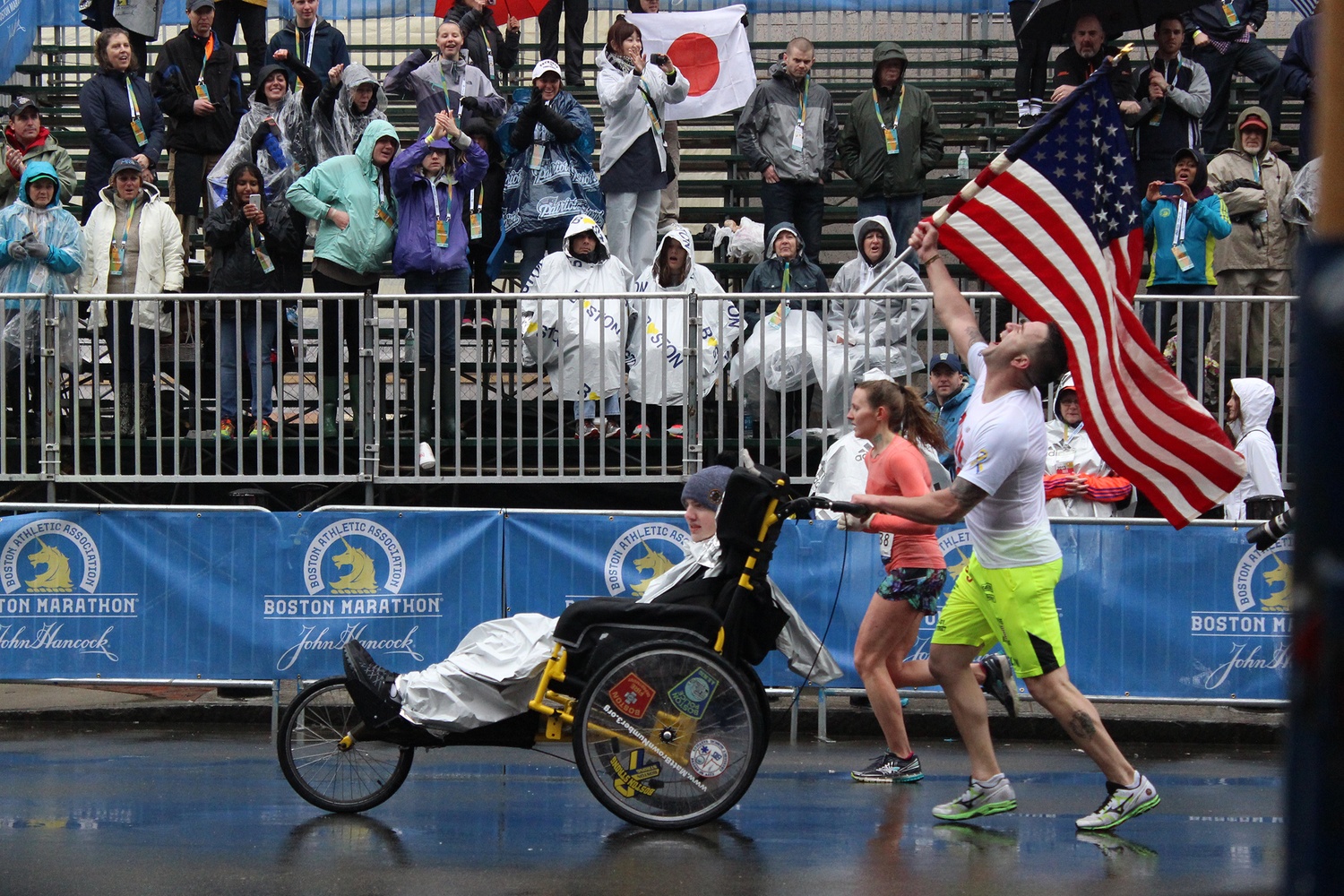 Former Army Ranger Lucas Carr, right, and Stonehill College student Matt Brown, who has been a quadriplegic since he was 15, celebrate as they near the end of the race. The two have run multiple marathons together for charity since 2012. By Savannah I. Whaley
By Brett J. Dowling, Crimson Staff Writer

Two years after two bombings left the Boston Marathon’s finish line in chaos in 2013, more than a dozen Harvard students, faculty, and affiliates took to the 26.2 mile Marathon course on Monday, the recent conviction of bomber Dzhokhar A. Tsarnaev on their minds.

With more than 30,000 entrants, the Boston Marathon is one of the three largest marathons in the country, according to the Boston Athletic Association’s website. This year, Ethiopian runner Lelisa Desisa won the Marathon, with a time of two hours, nine minutes, and 17 seconds. Desisa also won the race in 2013.

For many Harvard runners, like last year, the 2013 tragedy—which left three people dead and more than 260 injured—remained a motivating factor in their decisions to run this year’s race.

“I’ve always wanted to run a marathon,” said Miguel A. Perez-Luna ’15, who laced up Monday to run the Marathon in Boston. “But two years ago when I went to see one of my friends run the Boston Marathon, and that was the year of the bombing, for some reason I really thought that was motivating enough for me to want to run with the rest of Boston.”

“Like many runners, I thought that running the marathon is one way to honor the victims of the bombing,” Provost Alan M. Garber ’76, who now has run the Boston Marathon five times, wrote in an email after he finished running the course on Monday. “And I was very moved when I saw some of the victims running or walking the marathon. Their determination and resilience are inspiring.”

Anna E. Dolan ’15 added the solidarity that onlookers demonstrated also inspired her as she ran on Monday. She passed spectators wearing shirts emblazoned with the phrase “Boston Strong” and the names of the bombings’ victims.

“Those definitely made me think, ‘You know what, I can definitely finish this,’” Dolan said Monday evening. “A tragedy had occurred; the least I could do was complete the Marathon.”

For others, running the Marathon was much more personal. Glynis K. Healey ’15 referred to the Marathon as her senior thesis because she did not write one for class.

“It's definitely been nice to have something to look forward to and work towards all year,” said Healey, who is an inactive Crimson sports editor. 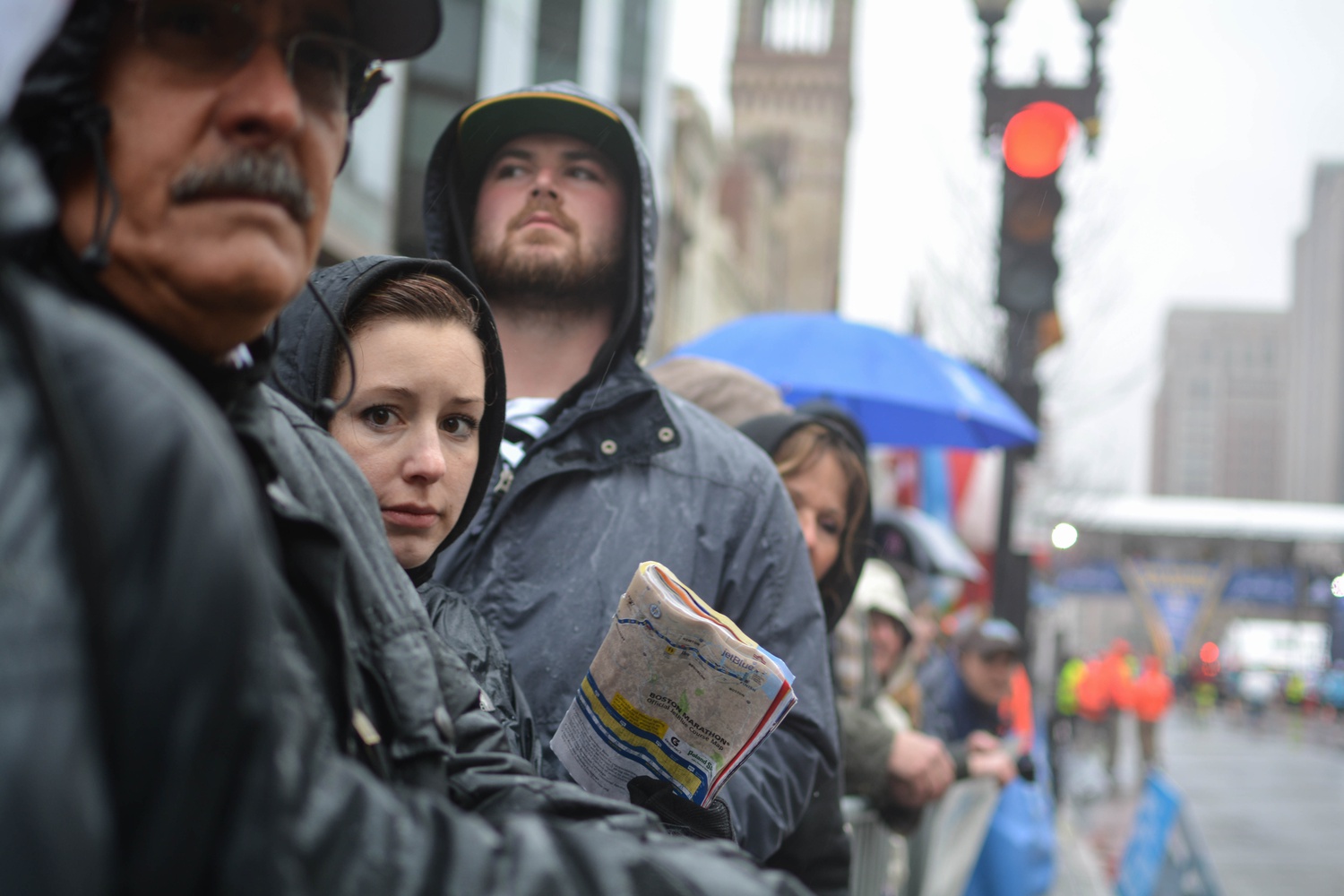 In Anticipation - Spectators, lined along the finishing stretch of the marathon in Copley Square, stare down the road in anticipation. 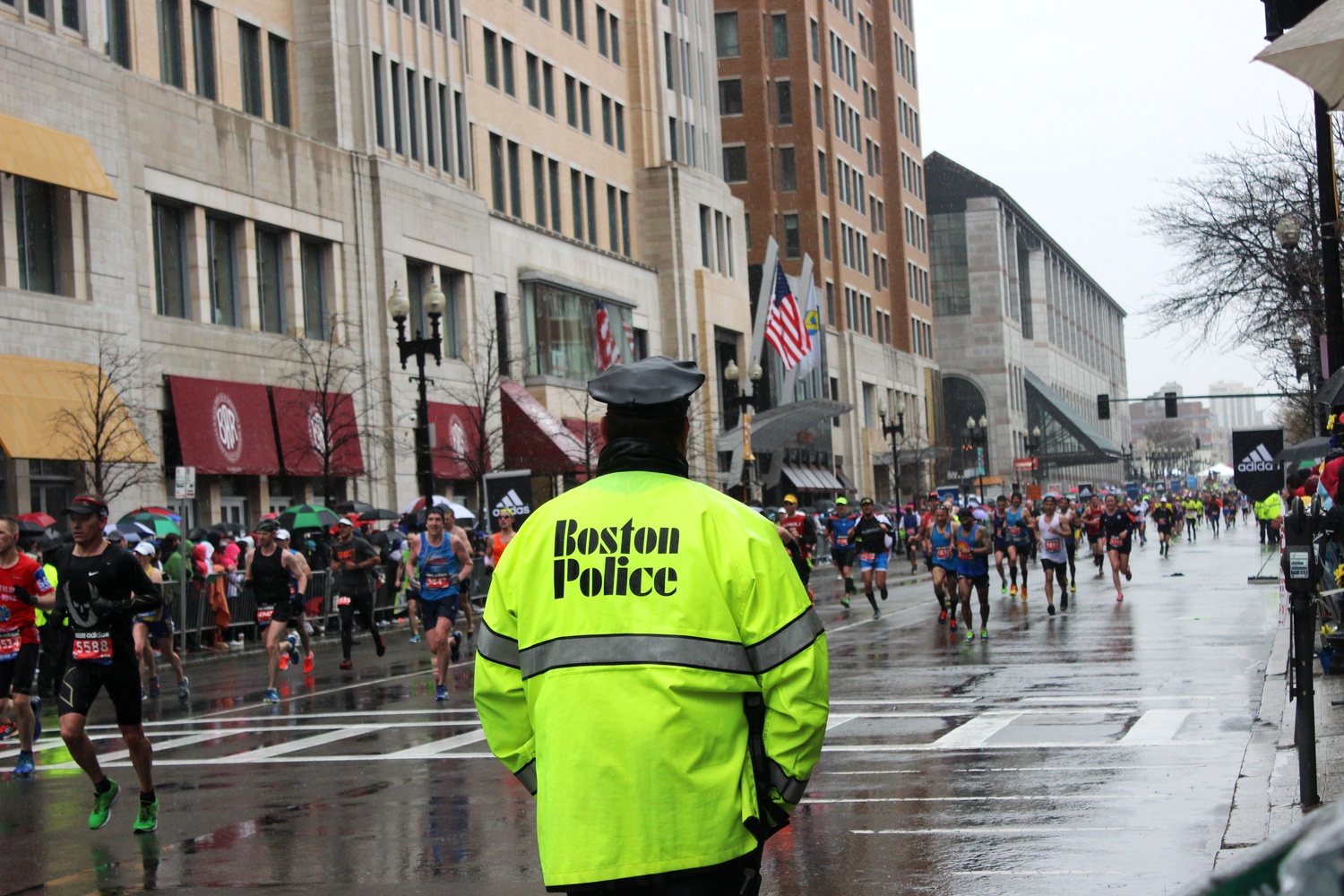 Boston Police at the Marathon - A Boston policeman looks on as runners approach the end of the race. Security was high at the race, with all bags subject to search and many policemen on standby. 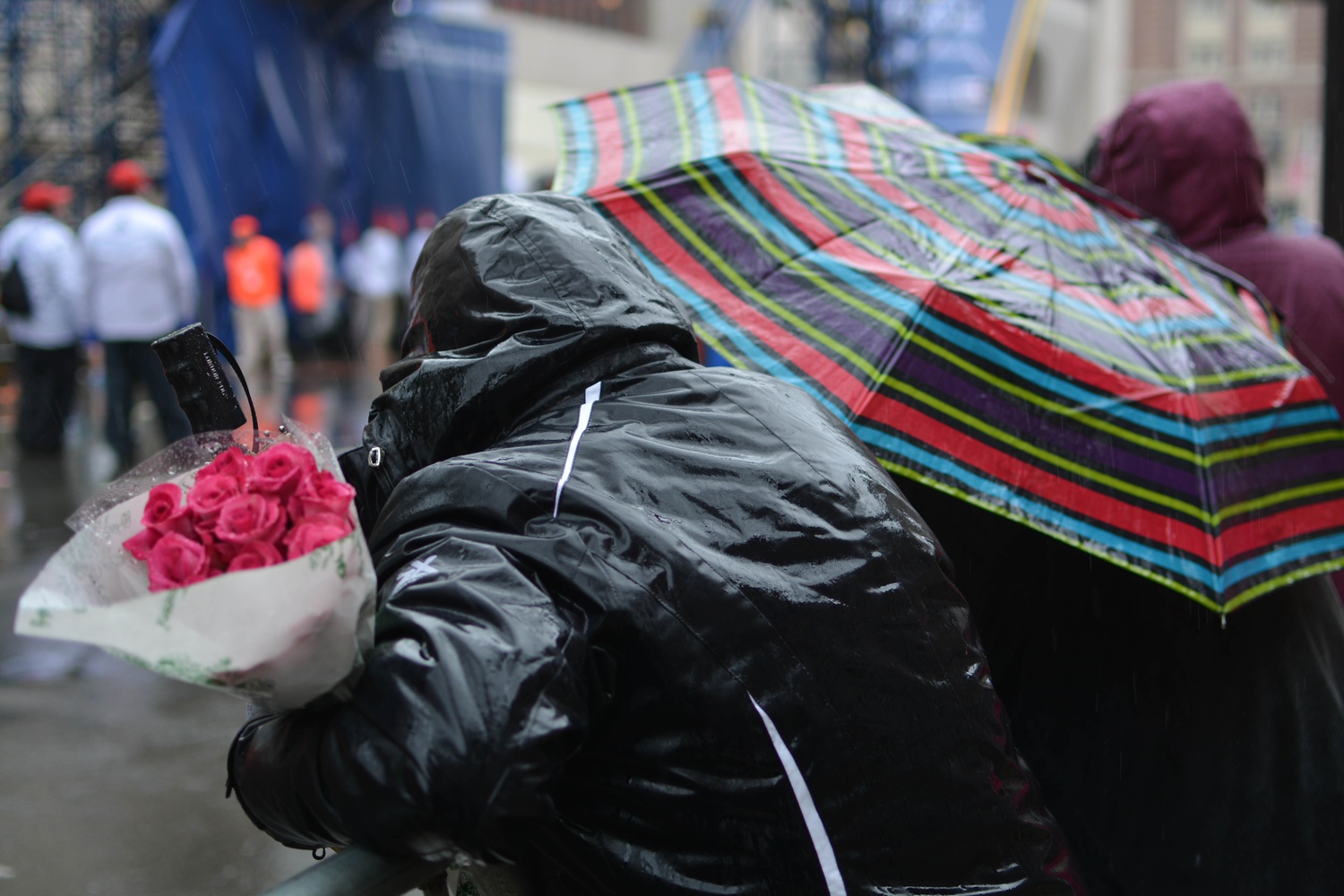 Waiting for Family - Under gray skies and rainy weather, a spectator awaits the arrival of her sister with a bouquet of flowers near the finish line. 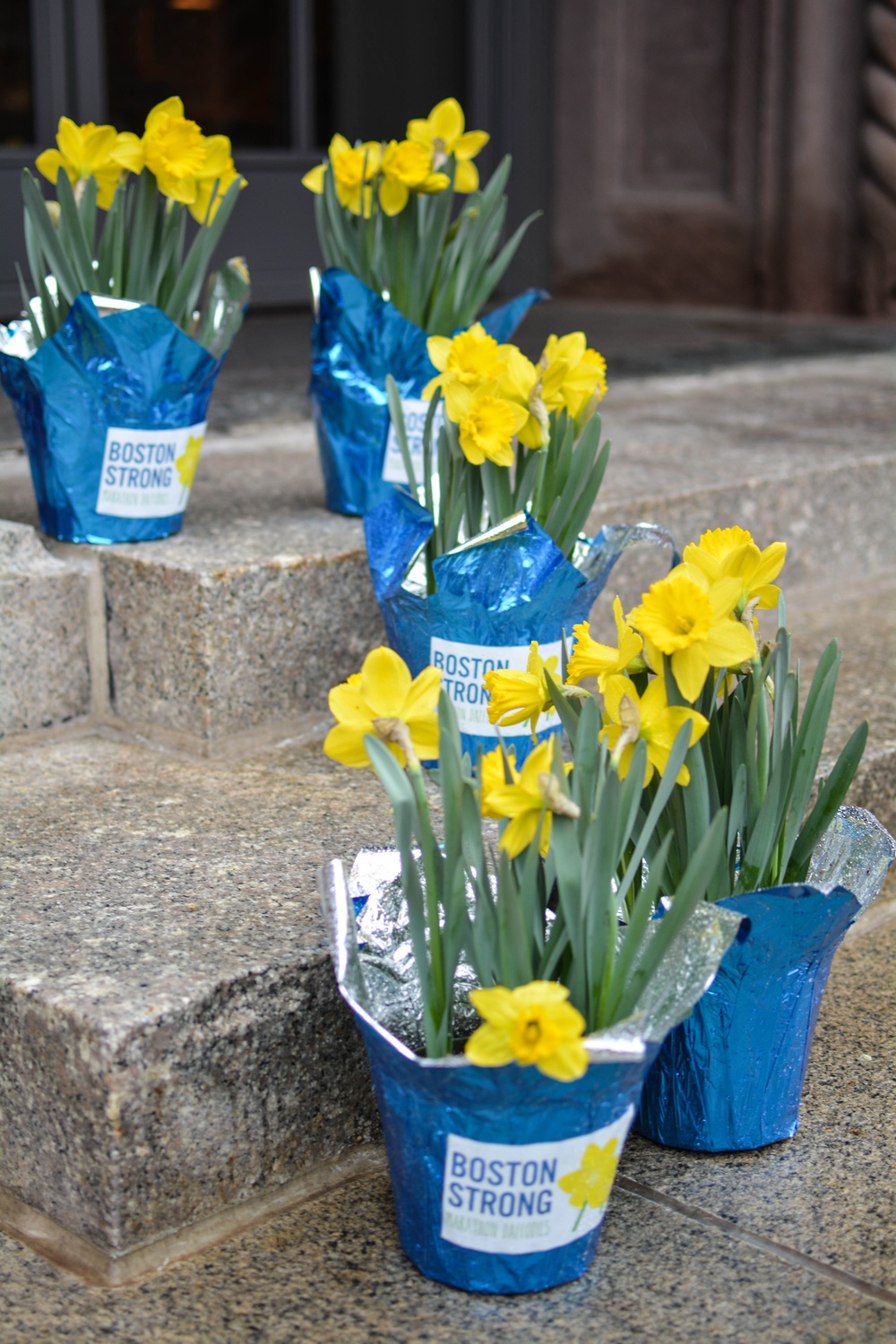 Daffodils - On various steps and in shops, pots of daffodils labeled "Boston Strong" line the routes of the 2015 Boston Marathon. 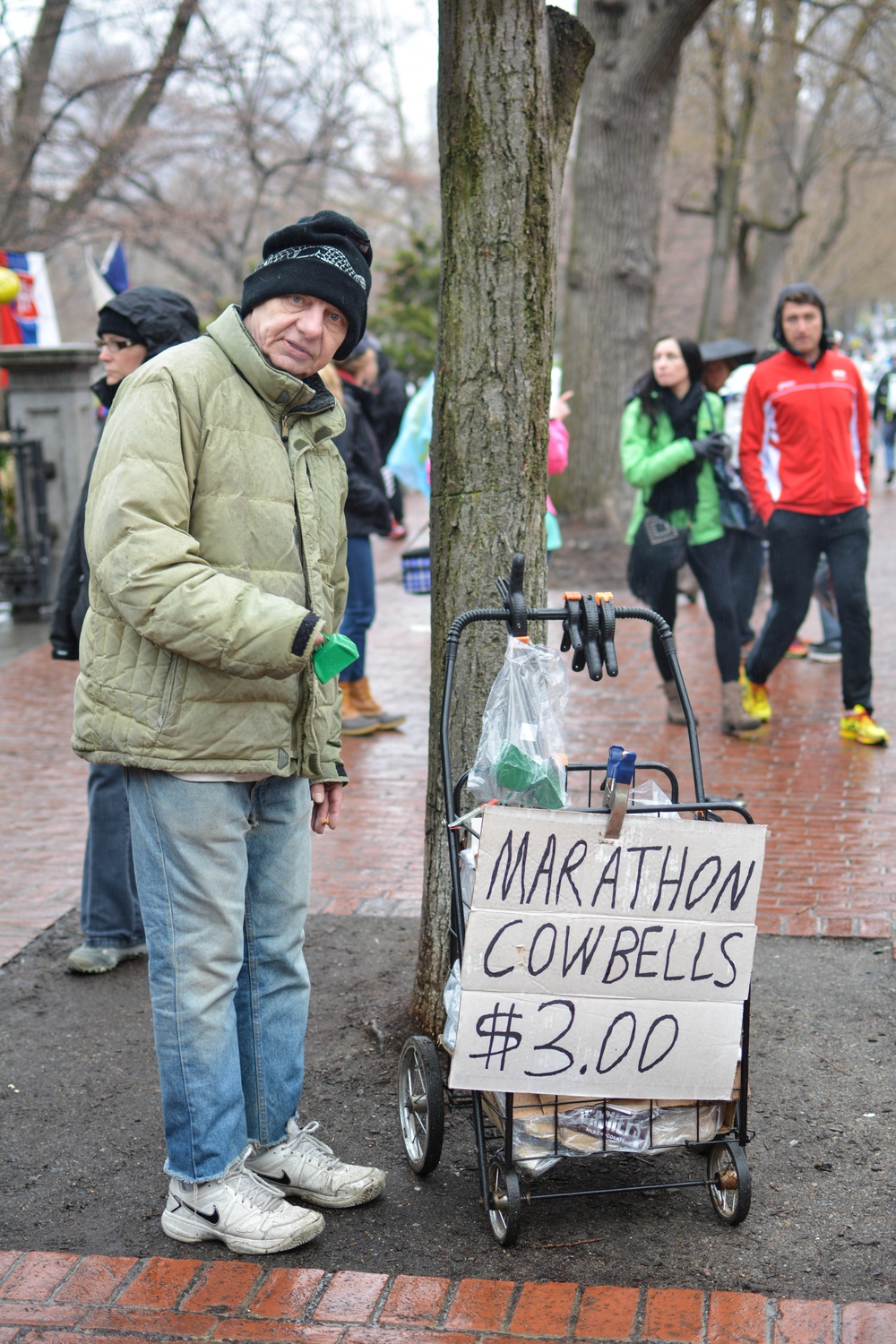 Boston Marathon 2015: Cowbells on Sale - At the entrance of Arlington Station, marathon cowbells are on sale for $3.00.

Lucas Carr and Matt Brown Near Finish Line - Former Army Ranger Lucas Carr, right, and Stonehill College student Matt Brown, who has been a quadriplegic since he was 15, celebrate as they near the end of the race. The two have run multiple marathons together for charity since 2012. 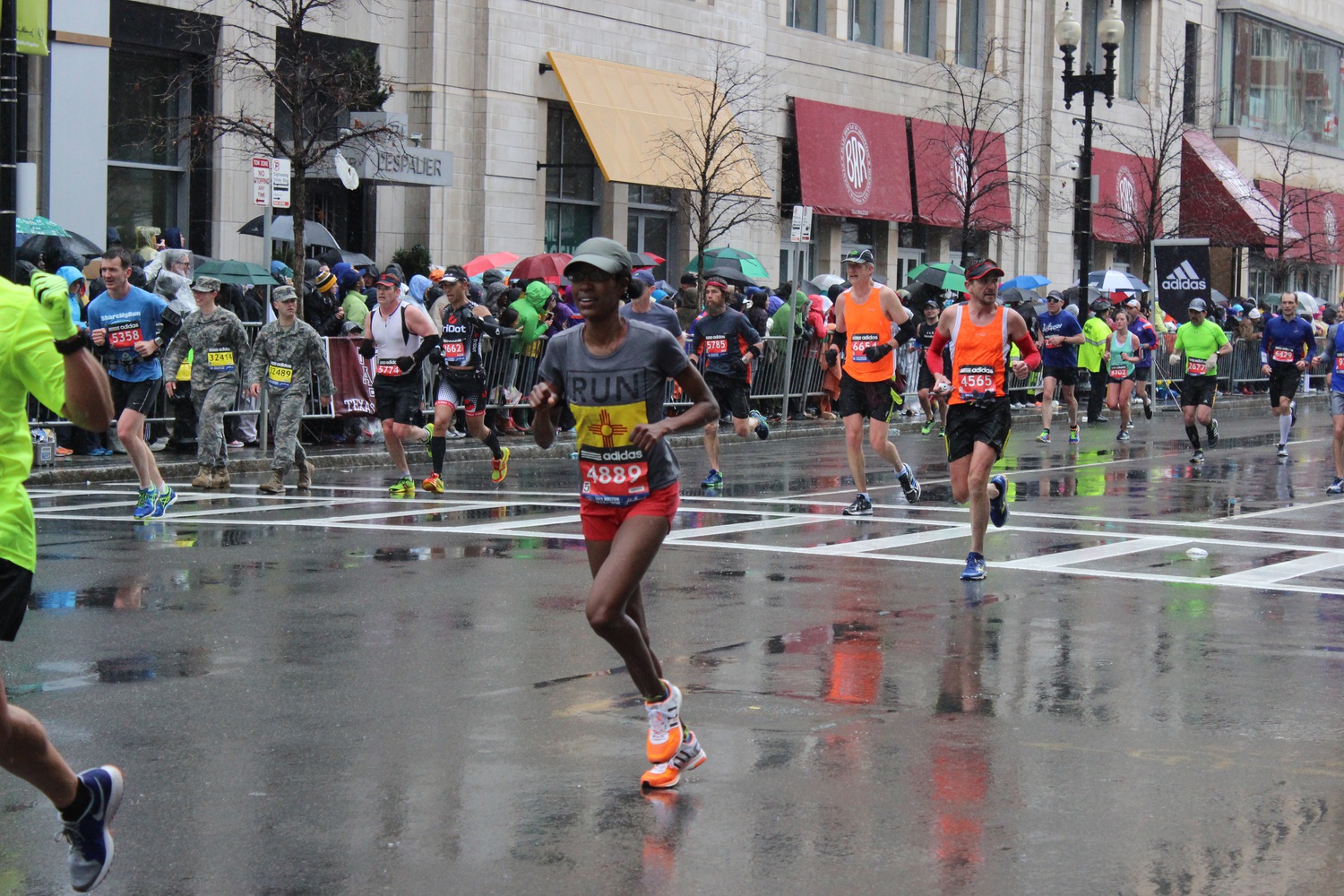 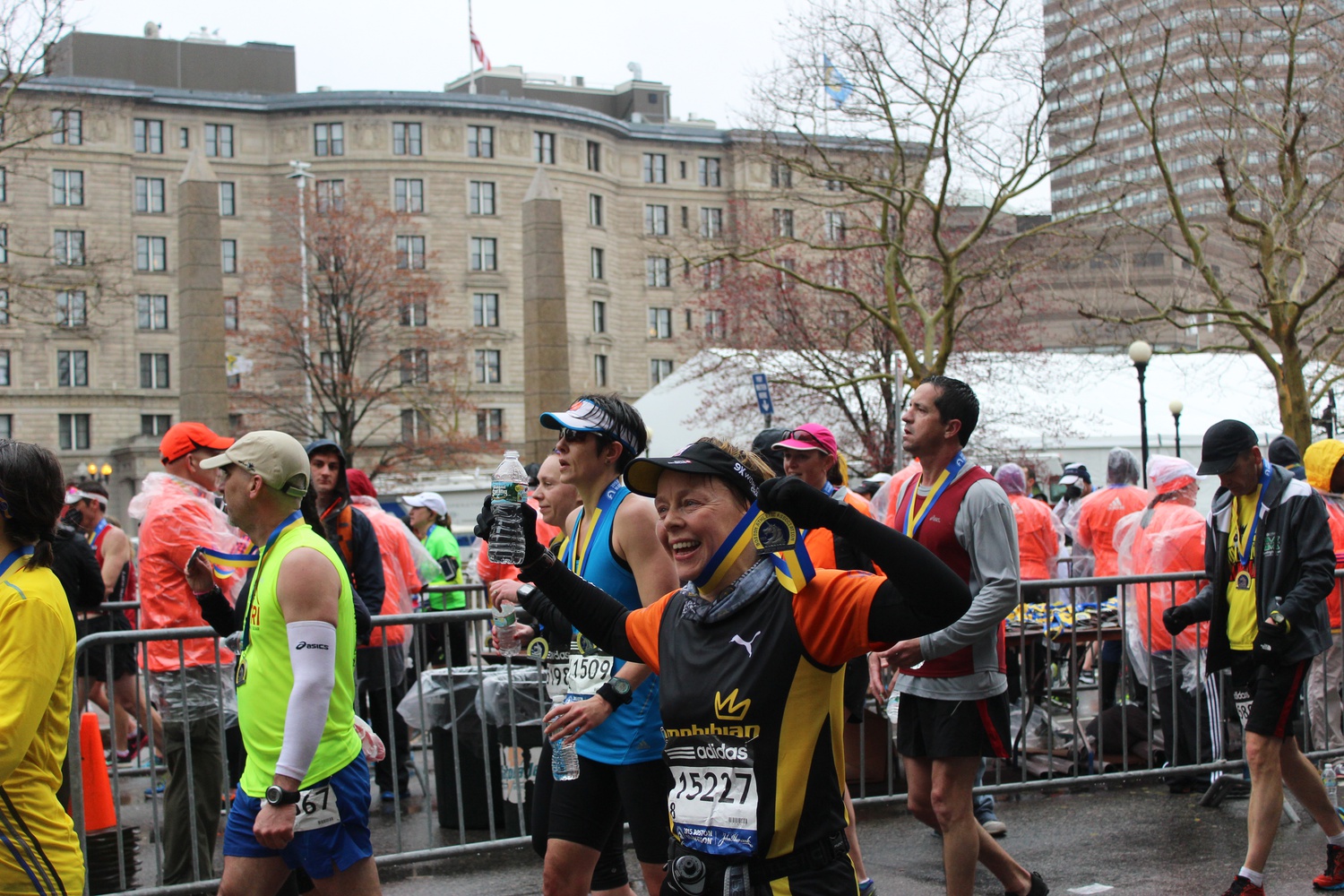 Runners Celebrate At End of Marathon - Lisa Howley celebrates with her medal and a bottle of water after finishing the Boston Marathon.

But no matter their reason for running, Harvard runners said this year’s record-setting snowfall was a severe impediment to their training regimen. For Shubhankar Chhokra ’18, the snow meant adapting the day-to-day length and intensity of his runs, resulting in a training schedule that was less strict than he would have liked. For Healey, the snow made going on long runs especially challenging.

The dreary weather that came on Marathon day, however, did not phase Jasmine P. Opie ’16.

“I’ve never smiled that much during a run,” Opie said. “I actually love running in the rain. I’ve always loved walking between the raindrops, so to speak.”

In addition to thousands of supportive fans, the Marathon landscape was filled with security officers and law enforcement.