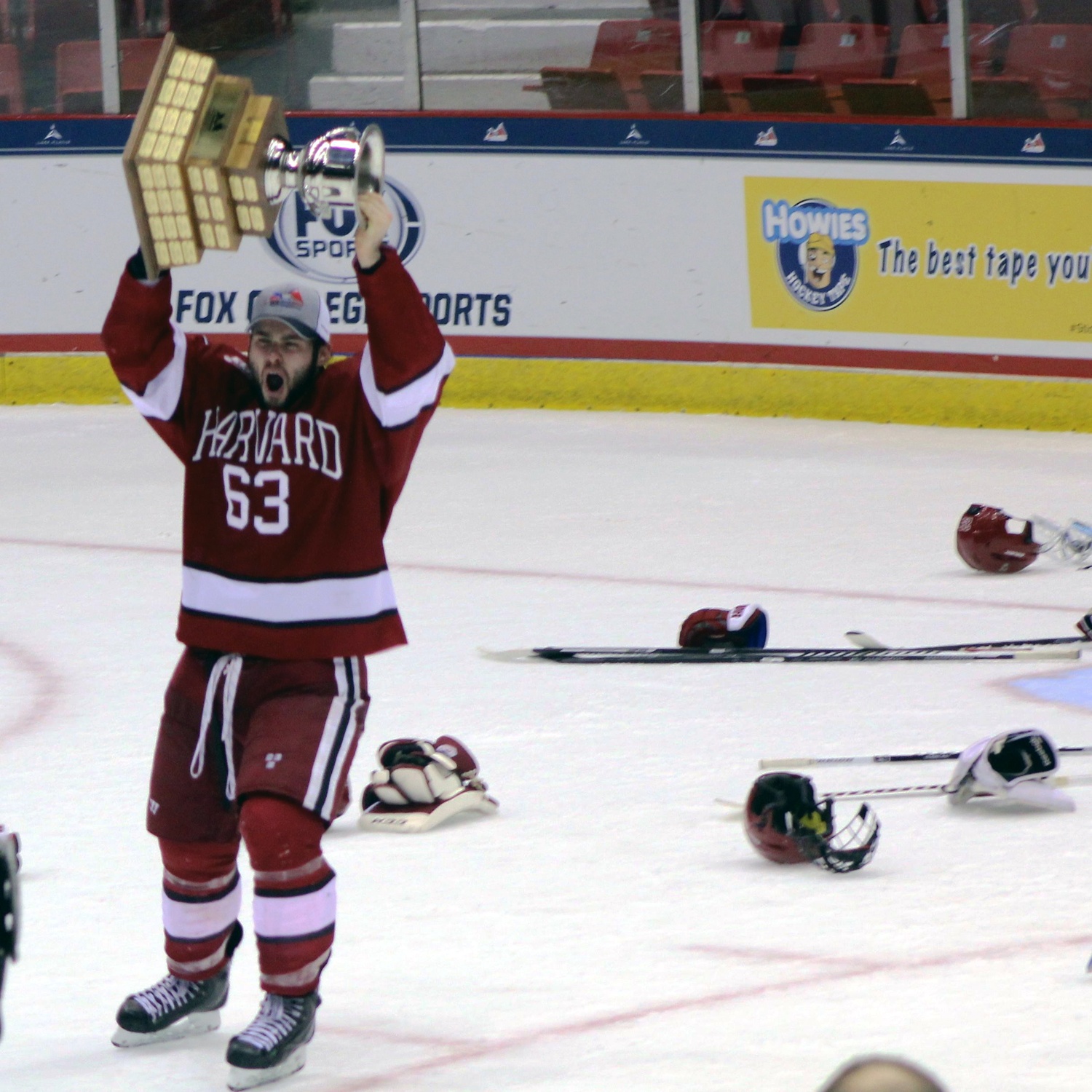 Men's ice hockey fourth-year forward Colin Blackwell came back from injury for the Crimson after not playing for nearly two seasons and was instrumental for Harvard's ECAC tournament run. By Michael D. Ledecky
By Michael D. Ledecky, Crimson Staff Writer

Colin Blackwell did not see his shot go in. A hip check from Colgate junior Kyle Baun had left the Harvard forward sprawling along the rink boards right after releasing the puck at the red line of Herb Brooks Arena in Lake Placid, N.Y., at the ECAC title game on March 21.

When he heard the roar of his teammates, he lost all sense of time and space.

“To be honest, I just kind of blacked out,” laughed Blackwell as he reflected on the empty-netter, which was the final score of the Crimson’s 4-2 championship victory. “Just kind of did my thing.”

Blackwell jumped onto the rink’s unusually short glass, completing a single pull-up before celebrating with his teammates. The unorthodox celebration will go down as one of the most enduring images of this year’s Harvard men’s ice hockey season—not only for the title it heralded but also for the individual comeback it represented.

“I just think it was fitting that it was Colin,” said Harvard coach Ted Donato ’91. “To come back after all he’s been through and to seal the game with that goal—I think was a fitting tribute to a guy that really persevered and endured an incredible amount of health challenges along the way.”

During the 2012-2013 season, Blackwell sustained two major concussions within a span of four months. The second one proved devastating.

The North Andover, Mass., native missed all of the 2013-2014 season and decided to withdraw from school in the spring to heal. It seemed that no treatment could ease Blackwell’s symptoms.

“The most frustrating part is, everything I kept doing, nothing was really kind of helping it out,” Blackwell said. “When other kids on my team or other athletes were getting concussions, they were slowly getting better and back into it. And for me it was like, ‘What’s wrong with me?’”

Blackwell began to feel better in the spring of 2014 and was cleared for contact in the summer. In the fall, he arrived on campus ready to play before a third concussion took him off the ice. A quick rehabilitation period allowed him to return for a nonconference contest against Bentley on Nov. 21, yet Blackwell felt dizzy and lightheaded during the game.

“I don’t think that I played that poorly, but I was very hesitant,” Blackwell said. “I wasn’t really looking to get hit, and after the game, everything came back, symptoms-wise.”

He realized he needed more time. When he resumed full-contact practices during the last week of the regular season, he was physically prepared, but he still had to confront the fear of a future injury.

“At that point I was sort of fighting a psychological battle,” Blackwell said. “I finally looked at myself in the mirror and said, ‘You’re ready. You’re going to have to get over the fears. You’re eventually going to have to do it sometime.’”

By the start of Harvard’s first-round ECAC playoff series with Brown on March 6, Blackwell felt like his old self.

After his return in the final weekend of the regular season, there was a sense that he could make a difference for a talented team that had struggled over the previous two months with midseason injuries.

In Game 1, Blackwell left no doubt. He scored his first two goals since January 2013, drew two penalties, and brought an intense pace to his shifts. The next night, he potted a third to help secure the series sweep.

“I don’t really know anyone else who would just take two years off like that and then step right in like that,” said fourth-year defenseman Patrick McNally, who recovered from a debilitating knee injury to make his own comeback in the ECAC tournament quarterfinals at Yale.

In the final period of regulation in New Haven, Blackwell connected with McNally on a drop-pass for a season-saving score that forced overtime. After the Crimson advanced on junior forward Jimmy Vesey’s double overtime winner, Blackwell continued his run in Lake Placid, scoring in both the semifinal and final. He would finish the tournament with five goals in seven games—second on the team only to Vesey’s tournament-record nine.

“You would think that there would be a lot of rust or that he wouldn’t be the same,” McNally said. “He didn’t lose a step—if anything, he gained one.”

McNally was the first to wrap his arms around Blackwell following the pull-up. Above all the congratulations exchanged in the celebratory huddle around the goal-scorer, Blackwell remembers three simple words: “We did it.”

—Staff writer Michael D. Ledecky can be reached at michael.ledecky@thecrimson.com.