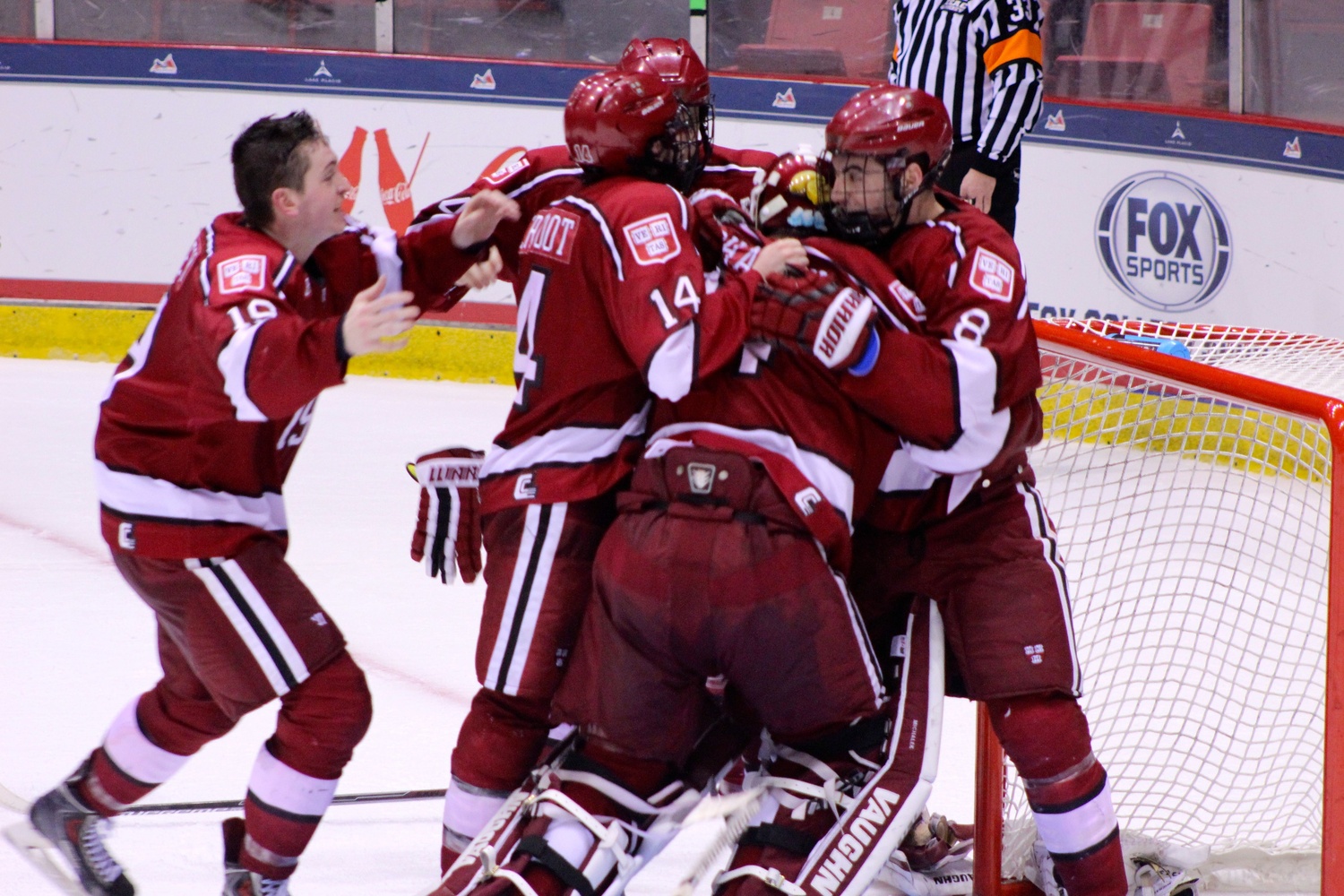 Harvard men’s hockey coach Ted Donato ’91 refers to the Crimson’s 2014-2015 campaign as “a tale of three seasons.” For the most part, his team’s year followed a basic template that is among the most compelling in sports: 1. Team exceeds expectations early to become a contender. 2. Team experiences adversity and attracts doubters. 3. Team overcomes adversity to win a championship.

The three stages of Harvard’s season hinged on a knee injury in late January, when fourth-year defenseman Patrick McNally faced the most important decision of his career. At the time, calling it a year and getting surgery probably made the most sense for the NHL prospect, but McNally thought differently.

He looked at a team and saw a group that had gone from unranked in the national polls to No. 1 in the PairWise Rankings. He saw a collection of individuals reaching their potential at the same time.

Going against the odds, McNally elected to rehab his knee with a shot at a late-season return.

Donato wanted to build a team that could withstand the trials that had hamstrung other talented Crimson squads. He brought in veteran associate coach Paul Pearl from Holy Cross. When his roster arrived in the fall, the team placed a renewed emphasis on team-building and community service.

Looking back, the 11-year head coach feels that the results showed on the ice.

Donato considers McNally’s decision particularly selfless. The Crimson struggled to find answers on the blueline in the defenseman’s absence, winning only four of their last 12 regular season games, yet McNally continued to work with an eye on returning in the ECAC tournament, holding on to the faith that his boys would give him a chance.

He got that chance in Game 3 of the ECAC quarterfinals in New Haven. With two shots—a goal with 3:35 left in the third period and an assist with 3:15 to go in the second overtime—McNally affirmed his team’s spot among the nation’s best and defeated his team’s greatest boogeyman.

“Every guy in the locker room was about as happy as they had ever been in their life,” McNally says, recalling the moments after Kerfoot tipped his overtime shot onto the stick of Vesey for the game-winner that sent Harvard to its first conference semifinal in three years. “It was a special, special moment.”

In Lake Placid, the Crimson clinched its first Whitelaw Cup and NCAA tournament appearance since 2006. The next weekend in South Bend, Harvard’s tale of three seasons went off-script, yet Donato’s recruits had proven their talent and learned something in the process.

“I think we learned as a team the type of commitment and the type of character that it takes to persevere and how difficult it is to win consistently,” Donato says. “[We learned] how rewarding it is when you do things the right way and you push yourselves to be the best student-athlete you can be in every aspect that would entail.”

—Staff writer Michael D. Ledecky can be reached at michael.ledecky@thecrimson.com.