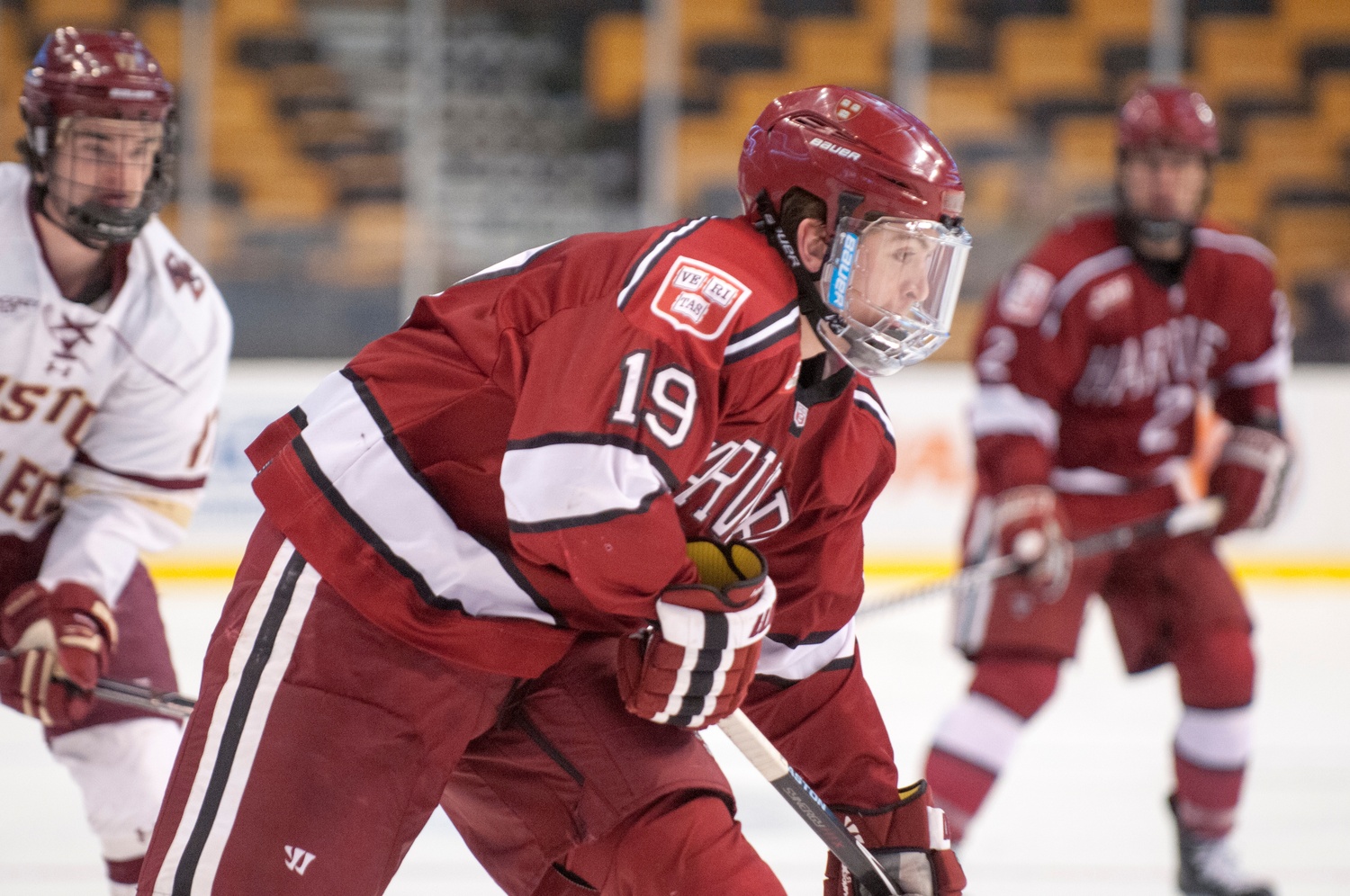 For opposing coaches trying to figure out how to slow down the Harvard men’s ice hockey team this past season, the first step in shutting down the offense was clear: contain junior forward Jimmy Vesey.

Doing so was much easier said than done.

Despite being the primary target of every defense he faced, Vesey continued to make gains for his team, propelling himself into the national spotlight. The junior notched 32 goals to top all Division I scorers, leading him to a stage inside Northeastern’s Matthews Arena as a finalist for the Hobey Baker Award at season’s end.

“I’m somewhat reluctant to rank players numerically,” Harvard coach Ted Donato ’91 said. “But I will say with certainty that he deserves to be mentioned among the names of the great Harvard hockey players. To lead the country in goals this year was an amazing contribution [and] to be a Hobey Baker finalist...and doing so while receiving a lot of extra attention from opponents…[was] incredible.”

The former Ivy League Rookie of the Year was at the forefront of the team’s renewed success this winter. After the Nashville Predators prospect emerged as the Crimson’s top offensive threat with 22 points a season ago, he solidified his status as one of the nation’s most dangerous attacking forwards this year, registering 58 points on the season.

“Our commitment level really started to change last year at the end of the season,” Donato said. “He’s really worked to become an all-around player.”

The Charlestown native opened the season with a 20-game point streak, leading his team to a 10-1-2 start in 2014. But after the Crimson limped to the finish by winning only three of its last 11 regular season games, the team found itself in a position where it had to advance far in the ECAC playoffs to earn a bid to the NCAA tournament.

The Crimson needed its top scorer to step up, and he did just that. The star forward recorded 14 points in seven games during the conference tournament, including two goals in both the semifinals and finals to help bring the Whitelaw Cup back to Cambridge.

“Jimmy had an incredible season...delivering down the stretch in the biggest of moments,” Donato said.

Perhaps no moment summed up Vesey’s role as a clutch scorer more so than his performance in double overtime of Harvard’s rubber match with Yale in the ECAC tournament quarterfinals. Up against a side that had been unbeaten against the Crimson in its last 10 tries entering the series, Vesey corralled a puck just above the crease and lifted it over the extended right pad of Bulldog goaltender Alex Lyon, sending the squad to the semifinals in Lake Placid, N.Y.

Although Boston University freshman forward Jack Eichel took home the Hobey Baker Award, Vesey still managed to come away with some hardware of his own. The forward was named the ECAC Player of the Year and the recipient of the Walter Brown Award, given to the top American-born men’s ice hockey player competing in New England, beating out fellow Massachusetts native Eichel.

While Vesey caught the attention of hockey fans across the country, there was, perhaps, no one more interested in Vesey’s season than Nashville Predators general manager David Poile. The Northeastern graduate was widely documented keeping tabs on the junior’s season, waiting for the chance to call him up to the professional level at the end of Harvard’s season to possibly aid Nashville’s Stanley Cup playoff push.

Vesey took a few days to deliberate whether or not to forgo his senior season once the team bowed out at the hands of Nebraska-Omaha in the NCAA regional semifinals before ultimately deciding to stay at school.

“First and foremost, I think he did an incredible job of keeping his focus and attention on our season and finishing strong,” Donato said. “He’s not only a great player but a very intelligent kid…. We’re very excited about his decision.”

Vesey’s time on the ice this year did not come to an end after the loss to Nebraska-Omaha. The junior recently wrapped up his stint with Team USA at the IIHF Men’s World Championship overseas, where the Americans beat out the Czech Republic to bring home bronze.

“It’s cool to skate with a guy all year and then see him play at that level of competition,” fourth-year defenseman Patrick McNally said. “Especially with the way he’s been playing because he’s been playing well. It’s great to see.”