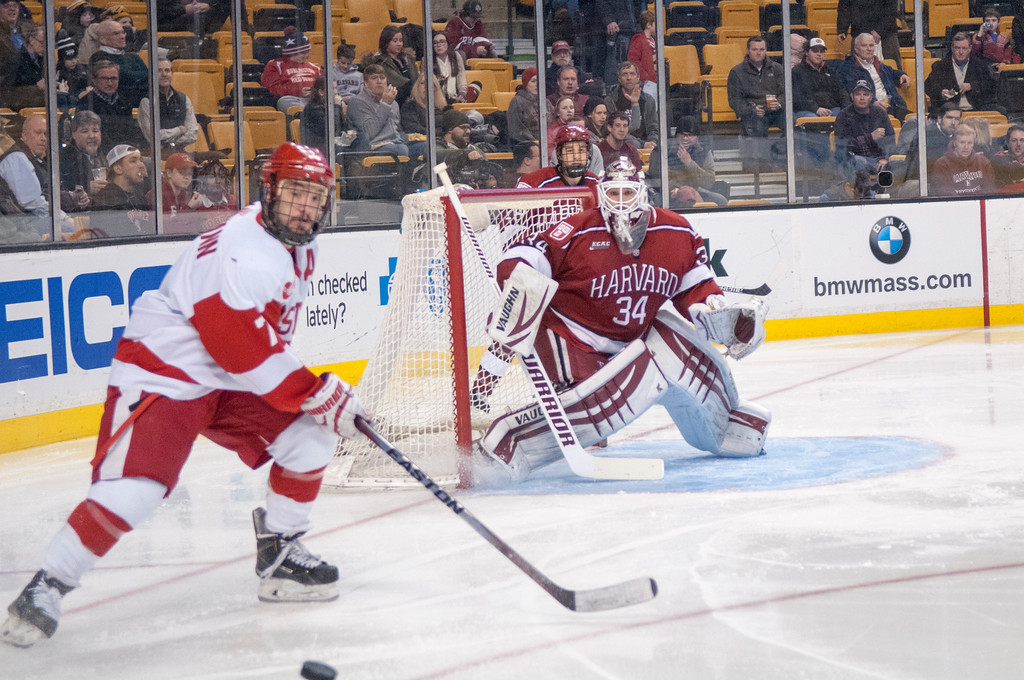 Steve Michalek stopped 63 shots that headed his way against Boston University in the opening round of the Beanpot, setting a Harvard and Beanpot record. By Mark Kelsey
By Kurt T. Bullard, Crimson Staff Writer

Steve Michalek stopped 63 shots that headed his way against Boston University in the opening round of the Beanpot, setting a Harvard and Beanpot record. By Mark Kelsey

Some say that goaltenders are at their best when they aren’t noticed, simply carrying out their job without committing errors that inevitably lead to focus being cast on them.

Fourth-year goaltender Steve Michalek caught the attention of every fan that was in the TD Garden for the Beanpot semifinal on Feb. 3, pitting the then-No. 6/6 Harvard men's ice hockey team against then-No. 3/2 Boston University. However, it was for all the right reasons.

The third-year standout stopped 63 shots on the night to keep the Crimson in the first round of the annual Boston-based college hockey tournament for as long as possible. While junior Danny O’Regan finally broke through after 82 minutes to send BU to the championship tilt against Northeastern, Michalek’s outing stole the show.

After a late second period goal from BU knotted up the snow-delayed contest at three goals apiece, the game would remain scoreless for the next 42-plus minutes. Even after Michalek showed signs of physical limitation late in the game that he later attributed to cramping, the Glastonbury, Conn., native went on to save 24 shots over the course of the two overtime periods, waiting for his team to deliver the game-winner that would never come. Terrier goaltender Matt O’Connor only recorded 31 saves in the contest, but it was enough to send BU to the finals.

Early in the first overtime, the Terriers seemed poised to end the drama early. Terrier forward Evan Rodrigues was able to find freshman forward Jack Eichel just above the left side of the crease. As soon as BU fans stood in anticipation of the game-winner, Michalek sprawled to his left to make a sprawling save on the eventual Hobey Baker Award winner.

“I thought Steve was tremendous throughout the game,” said Harvard coach Ted Donato ’91.

“He was just so focused. He was dealing with cramping up. My memory in particular [is of] the save he made in overtime that was made across the crease. He reacted late...and slashed his pad out to the left. The overall competition level, the focus and intensity and the calm under pressure under that many shots made it a memorable performance.”

O’Regan’s goal came on an odd-man rush off a turnover in the defensive zone from junior co-captain Kyle Criscuolo. Rodrigues stole his pass, taking advantage of a two-on-one opportunity by sliding a backhand pass over to his linemate. All Michalek could do was watch O’Regan rocket the puck past him into the netting to finally put an end to the contest.

“It’s too bad we couldn’t come through for him,” McNally said. “But I don’t think that’s a performance that will be forgotten soon.”

The goaltender's performance will sit in the Harvard record books for the foreseeable future. His 63 saves eclipsed a 45-year Beanpot record set by Boston College goaltender Jim Barton by more than ten saves and also broke the Harvard program mark, which had been held by Jim Blair ’86.

In a game where Harvard struggled to find consistent offense after the first period, Michalek’s stonewalling in net were key in giving Harvard any chance of victory over its crosstown rivals. The Crimson averaged less than six shots on goal per period after the first 20 minutes of play, while the Terriers put 60 shots on Michalek over the same time frame.

“You talk about a game that we shouldn’t have been in two overtimes,” McNally said. “He made some saves I still can’t believe he made.”

Michalek’s performance in early February highlighted a solid campaign for the fourth-year. The Minnesota Wild prospect ranked sixth in save percentage in the conference, only three hundredths of a percent shy of third place in the ECAC. Michalek's play in the postseason was critical to the team’s run to the conference championship, as he only allowed just over an average of two goals per game in the squad’s seven games in the ECAC postseason.

Michalek had a similarly solid performance in the rubber match of the Yale series, stopping 40 of 42 shots over 96-plus minutes, which allowed for junior forward Jimmy Vesey to finally put away the game-winner and send his squad to Lake Placid.

—Staff writer Kurt Bullard can be reached at kurt.bullard@thecrimson.com