No Offseason: The Lives of Two-Sport Athletes at Harvard 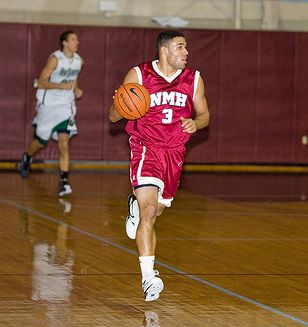 Varsity athletes at Harvard have demanding schedules during the season. They have to factor in grueling practices, lifts, and conditioning sessions along with their academic schedules, which can be quite a challenge when sports can take dozens of hours a week.

Yet during their offseasons, most athletes are able to take a step back and limit their frequent treks across the river, to the Malkin Athletic Center, or to the boathouse.

But that is not the case for freshman Candida Janachowski and senior Matt Brown.

Janachowski and Brown both committed to Harvard for one varsity sport—women’s soccer and men’s basketball, respectively. However, they have also embraced a challenge few Crimson athletes choose to take on—a second sport. Janachowski also competes for Harvard in the long jump for the track and field team in the spring, and Brown also plays wide receiver for the football team in the fall.

However, being in season all year is nothing new for the two athletes. Both became accustomed to competing year-round in high school, especially Brown, who also participated in track and field.

“I was always in season [in high school]," Brown said. “But the seasons were not nearly as grueling as they are at the Division I level, so it was still a significant adjustment.”

The physical component of constantly being in season took its toll on Brown. The Barrington, R.I., native was unable to participate in the strength and conditioning training his teammates underwent during their offseasons, and he did not have time to give himself a break.

“My body would get used to running on turf fields, giving maximum amounts of effort for short periods of time, constantly receiving and delivering full-contact hits,” Brown said. “Once I transitioned to basketball, it would take me a few weeks to get out of football shape, lose some weight and build up the endurance. The transitions took a toll on my body, especially my joints.”

As a freshman, Janachowski says that she has not yet felt the long-term physical effects of being a two-sport athlete. Nonetheless, her busy schedule has brought about a different sort of difficulty. Teams usually spend a lot of time together, especially in the offseason. Even out of season, many still have organized team dinners, team outings, and casual practices—but Janachowski misses them due to her other commitments.

“Socially, you do miss certain team activities,” Janachowski says. “And it leaves you behind not only physically and technically, but you also miss out on the group dynamic.”

Janachowski’s experience mirrors Brown’s in that she faces a dynamic transition from one sport to another. The short-range power she requires as a long jumper doesn’t directly translate into the endura nce needed to be a soccer player.

For Brown on the other hand, not all of the skills necessary to excel in football and basketball are mutually exclusive. According to the senior, basketball developed his ability to move quickly and fluidly and established his ability to make split-second decisions off opponents’ actions, a skill which also applies to Brown’s position as a wide receiver.

“As a wide receiver on the football team, I would often be put in…situations where I would be in one-on-one coverage, and the quarterback would loft a high-arching pass to the back of the end zone,” Brown said. “I would use my body to position myself…right in time to jump up and catch the pass. I like to think I excelled in this because for all the box-out and rebounding drills I was put through in Lavietes [Pavilion] throughout the years.”

While transitioning between football and basketball has certainly proven difficult at times, that challenge has been secondary to Brown’s struggle to find balance between his life as an athlete and as a student. Typically, varsity athletes are given planners and resources to provide aid with time management during the season. However, these resources are not extended to athletes who lack an offseason, therefore depriving them the chance to take on a heavier courseload when they are not in season.

According to Brown, these complications can force two-sport athletes to make hard academic decisions with limited guidance. However, both Brown and Janachowski have embraced this disadvantage as best they can.

“School-wise, it’s made me really time-conscientious,” Janachowski said. “It’s honestly helped me manage my schedule. Otherwise I’d procrastinate a whole lot more. But because I’m on a time crunch all the time, I’ve been able to manage everything better.”

However, in the midst of the balance-seeking, there are two things that both Janachowski and Brown believe are no-brainers—first, their equal preference for both sports, and second, their choice to become two-sport athletes in the first place.

“I did commit [to Harvard] for soccer,” Janachowski said. “At the same time, I love the track team and their dynamic and what they do. But I would say the dynamics of both teams are very different, and I can’t say I prefer one over the other.”

Brown will be graduating this year with the Class of 2015. Having sacrificed every semester of his Harvard life to a sport, he is unwavering in his decision.

“I would absolutely play two sports if I were able to do it again,” Brown said. “After my experience of playing two sports at Harvard, I don’t feel like I could be any more prepared to begin the next phase of my life.”