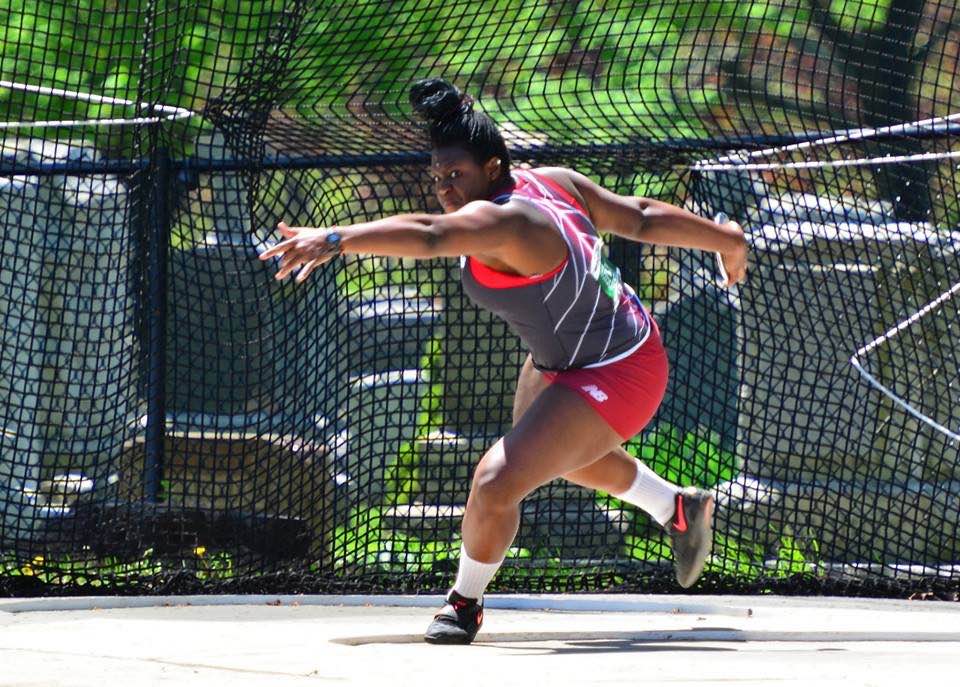 Rising senior Nikki Okwelogu will represent Nigeria in the shot put at the 2016 Olympics. By Courtesy of Brian Panoff
By Julio Fierro, Crimson Staff Writer

This is the trajectory that the season of Harvard women’s track and field sophomore Nikki Okwelogu has taken. The Fresno, Calif., native, who competes in both shot put and discus for the Crimson, dazzled after getting a summer of international experience on the Nigerian national team.

“It’s been tremendous,” Harvard coach Jason Saretsky said. “She’s been really consistent with her improvement, and it’s a testament to what sort of competitor she is.”

Okwelogu has dominated the Ivy League this season, taking home two conference titles and earning first-team Indoor All-American honors in the shot put. The sophomore also claimed another Ancient Eight crown in the discus and two Heps Field Athlete of the Meet awards.

With just outdoor nationals and the Oxford-Cambridge meet remaining, Okwelogu is currently ranked ninth in the nation—and first among sophomores—in the shot put. Still, competing at a high level is nothing new for Okwelogu, who arrived at Harvard as a high-level recruit in both of her events with plenty of experience on the national stage.

The sophomore’s preparation for what has become a breakout season came largely from experience gained this summer competing for the Nigerian world team. Okwelogu took home the title in the shot put and finished second in the discus at the Nigerian National Championships before going on to compete at the IAAF World Junior Championships, where she qualified for the final round against a field filled with Olympic prospects.

The sophomore also had competed at the Commonwealth Games in Scotland over the summer, placing ninth in a field that included two-time Olympic champion Valerie Adams of New Zealand.

Okwelogu’s experiences over the summer have helped her come back with a more confident attitude towards the way she approaches her Ivy League and collegiate experience.

Okwelogu’s season has not been without setbacks. She suffered an injury prior to NCAA Nationals in March but persevered to set what was at that point an Ivy record with a 17.22 meter throw, garnering her All-American honors.

These achievements have come as a result of a measured training regimen Okwelogu has cultivated over the past two years.

“Every day I come to practice trying to fix my technique, and it’s the little things,” Okwelogu said in February. “Last year I did everything that was asked of me more or less, but this year I’ve held myself more accountable by doing core on the side or eating better, showing up to practice 30 minutes early, and getting a good warmup in.”

Okwelogu’s connection with throwing coach Ross Richardson, who joined the Harvard staff in November, has also aided her performance.

“He’s done an outstanding job helping guide her, physically in training, technically with the technique work he’s done, and also the emotional aspect of our sport.” Saretsky said. “It’s been fun to see those two really clicking.”

This season, Richardson has helped Okwelogu progress from the foundation she set her freshman year. The refinement of her technical skills and the building of confidence have been major areas of improvement. Richardson says that Okwelogu’s work ethic and commitment to bettering herself as an athlete have been the main factors behind her growth.

“When she’s at practice and concentrating on her event, it’s all business,” Richardson said. “She’s really good in practice scenarios, really dialing in on what we’re trying to accomplish…. When we’re working on a concept or idea around technique, she’s just really dialed in on that.”

Along with her work ethic and talent comes a maturity which, according to Richardson, is uncommon for amateur athletes of her age.

“[Her ability] is something a mature athlete and a lot of people have to learn to do,” Richardson said. “If something goes wrong, it doesn’t throw you completely out of your mindset in competition.”

Despite all of Okwelogu’s success, Richardson believes the sophomore has yet to reach her ceiling.

“There’s a lot of room for growth,” Richardson said. “We constantly talk about improving our bottom number…what she can throw any day, any situation…[and] then it’s up to her to step up in the moment.”

Okwelogu now has her eyes set on reaching the NCAA Outdoor National Championships this June in Eugene, Oreg. While it is unclear what lies ahead for the sophomore after that, a pursuit of further international endeavors, including the Olympics, remains within the realm of possibility.

One thing is certain, however: So long as the sophomore continues to put in the hard work that she has so far, no stage will be too big for the thrower. Because now she “owns the place.”

—Staff writer Julio Fierro can be reached at julio.fierro@thecrimson.com.