Making the Jump From Juniors 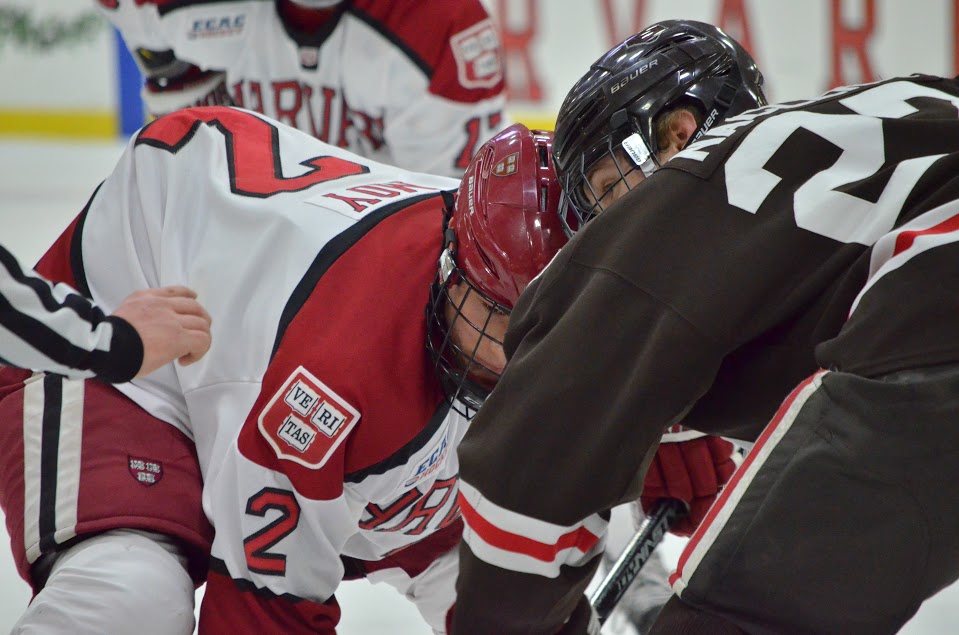 In a season that saw the Harvard men’s ice hockey team return to national prominence, the Crimson offense tallied 3.27 goals per game, the highest mark in the ECAC. In addition to having an eye for the back of the net, Harvard’s five highest-scoring forwards all shared another thing in common: They all played junior hockey prior to arriving in Cambridge.

With their sights on junior hockey programs both in the United States and Canada, some promising ice hockey prospects leave home early—usually during the later stages of high school—to maximize their chances of playing hockey at the collegiate or professional level. The majority of players currently listed on Harvard’s roster took this route prior to suiting up for the Crimson.

The practice is not unique to Harvard, the Ivy League, or the ECAC, however. These expansive development leagues, including the United States Hockey League (USHL) and the Ontario Hockey League (OHL), have made this experience commonplace in the ice hockey world. Many players on the Harvard team credit their junior hockey experiences with improving their collegiate and professional prospects as well as critical aspects of their personal growth.

The junior leagues, which mostly feature players ages 16-20, offer the best players in the country a place to develop before enrolling in college. Typically, the athletes who participate leave home to compete for a minor league team stationed miles away and live with a host family in the area. The experience can also involve attending a local high school, as it did in the case of freshman Jake Horton, who spent nearly his entire high school career playing in junior leagues.

Horton cited the challenge of competing at a higher level, primarily against older players, as one of the driving factors behind his choice to play junior hockey. After making his junior hockey debut at the end of his sophomore year of high school, Horton noted that he was forced to develop significantly as a player simply to earn ice time. Along the way, he learned the “little things” that were needed at higher levels of competition.

“I [was] a prima donna type player in high school where all I wanted to do is score goals,” Horton said. “I went to junior hockey [where] you’re a 15-year-old playing with 20 and 21-year-olds, and I wanted to find a way to make myself useful to the coach. I learned how to play defense, [and] I learned how to do all the little things right and focus on the fundamentals.”

Seb Lloyd, Horton’s classmate and occasional Crimson linemate, said that one of the biggest benefits junior hockey provided him had to do with physical development. Playing against some opponents that often were two and three years older—as he would have to do continually as a college freshman—Lloyd focused on bulking up and building his strength to be able to stay on the ice against more physical players. 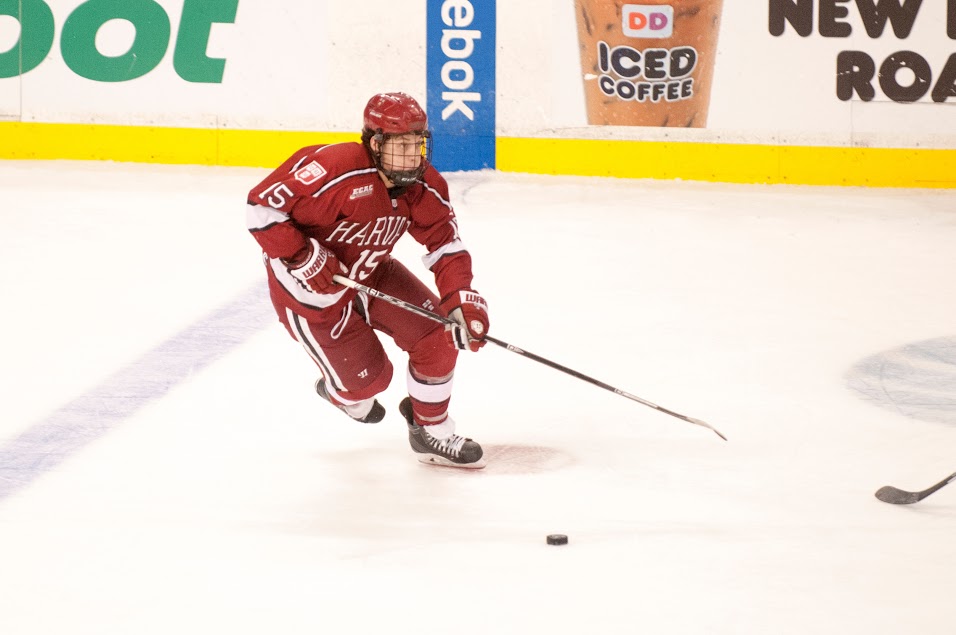 Freshman forward Seb Lloyd played in 34 of the Crimson's games this season, amassing seven points for the team. By Mark Kelsey

“You are playing against older guys, so you have to mature physically and work hard off the ice and get strong so you can stay healthy enough to play and contribute,” Lloyd said.

Both players also credited the program with helping to add to their emotional resiliency. Junior hockey players typically stay with “billet” families that serve as their homes away from home. However, while these groups provide familial structure, both Lloyd and Horton said that they still had to learn how to function more maturely.

“Your billet parents aren’t driving you around or lending you money—it teaches you to be independent,” Lloyd said. “The main thing a billet should do is teach you to live on your own while still having that family atmosphere in a way.”

According to sophomore Tyler Moy, the billet family structure prepared him for the transition to college. Moy grew very close with his junior hockey roommate, noting that their billet parents served as a “second family” in mentoring both him and his roommate while Moy played for the Omaha Lancers of the USHL.

“Living with the billet family was a huge plus for me because they gave us the structure a normal family would have, [but] we also had to develop ourselves and create a sort of independence during that time,” Moy said. “In college, other than professors and tutors, you are just living with other kids your age…. Just having that structure to rely on was a very nice touch.”

Horton said that the independence proved crucial in his educational development as well. While admitting that in high school he felt like a “big fish in a small pond,” Horton said that he learned to hold himself to a higher standard because of the fact that there was nobody else looking out for him.

“I became very mentally tough and was able to find a way [to] not get overwhelmed at Harvard,” Horton said. “It definitely prepared me from a mental toughness standpoint to handle adversity.”

When comparing juniors to its most common alternative, prep school hockey, all three players acknowledged that the two certainly have their differences. Most notably, there is a tradeoff that pits the quality of play, which is much higher in juniors, against the ability to receive a more traditional high school experience by attending a prep school. Horton commented that his teams’ demanding travel schedules made it hard to share some of the same experiences as his classmates. 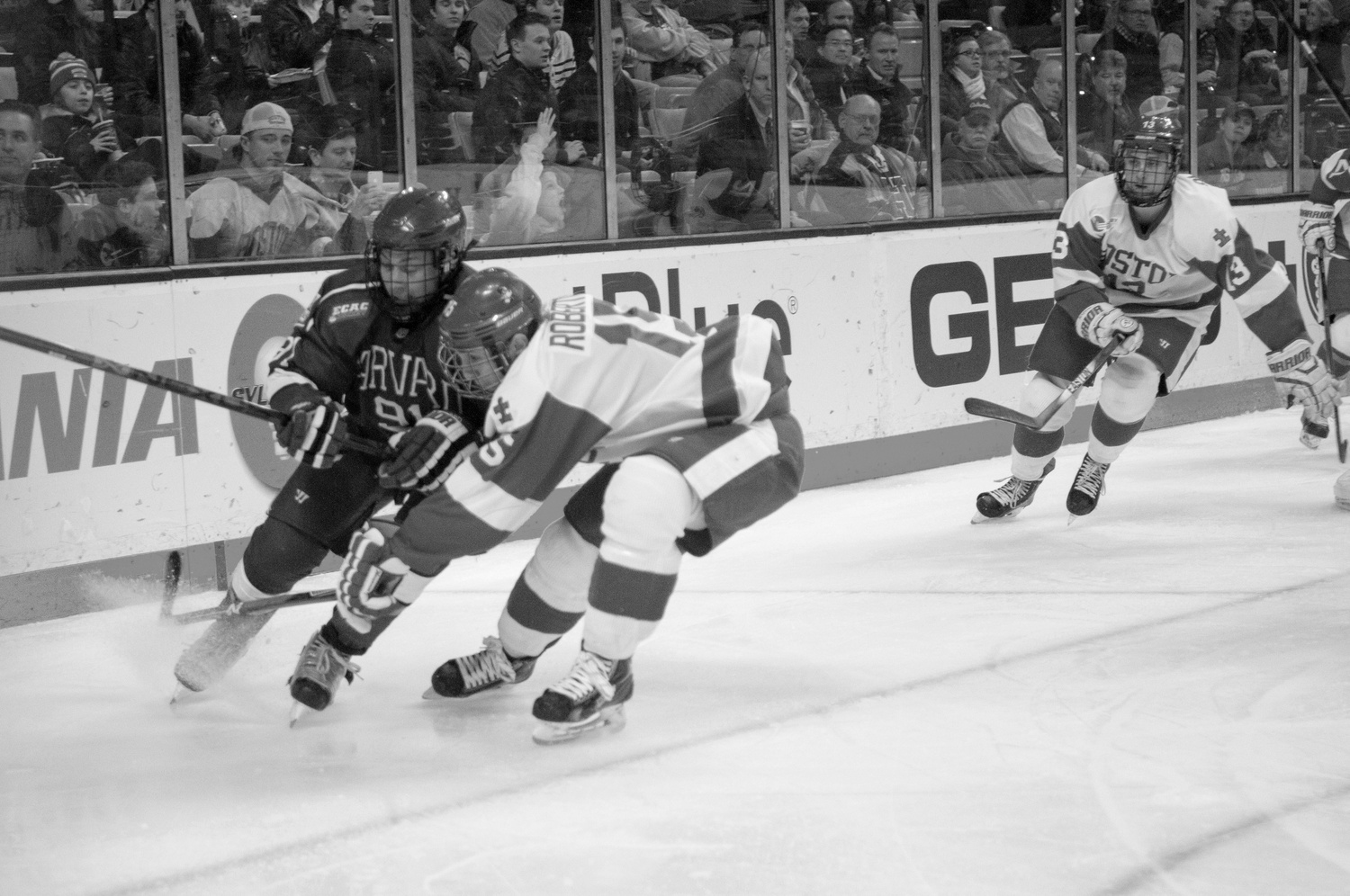 Freshman forward Jake Horton (above-left) is one of many Crimson skaters who played in the junior leagues before arriving in Cambridge. The practice allowed them to gain experience competing at a high level prior to collegiate play. By Mark Kelsey

“You end up missing a good portion of the high school experience because you aren’t going to football games, [and] you aren’t going to dances,” Horton said. “You are confined to that small group of guys on your team.... You don’t have the same support group.”

Lloyd noted that in his case, the benefits far outweighed the consequences. Growing up in Prince George, British Columbia, the forward was not just choosing between junior hockey and high school—he was deciding whether or not to make a jump to the pros.

Lloyd opted against moving to a league like the Western Hockey League (WHL), instead choosing to play junior hockey for the West Kelowna Warriors of the British Columbia Hockey League (BCHL), so that he could maintain his amateur eligibility.

“I had a lot of friends in the WHL getting paid to play already, but my payment is getting the opportunity to play college hockey at a place that I wouldn’t be able to play otherwise,” Lloyd said.

Moy echoed many of the same sentiments, noting that junior hockey pitted him against the best players in his age group and provided him with the best possible preparation for college ice hockey. Playing in a town where junior hockey was one of the primary sporting attractions, Moy believes that his team got more support than any prep school team would.

“[Our building] was 80 percent full every night, and it was a thing that everyone wants to go out there [for],” Moy said. “You got to be a fan favorite and sign autographs after.... In that sense, it’s like you’re a pro. It’s a great lifestyle.”

Staff writer William C. Skinner contributed to the reporting of this story.

—Staff writer David Freed can be reached at david.freed@thecrimson.com.