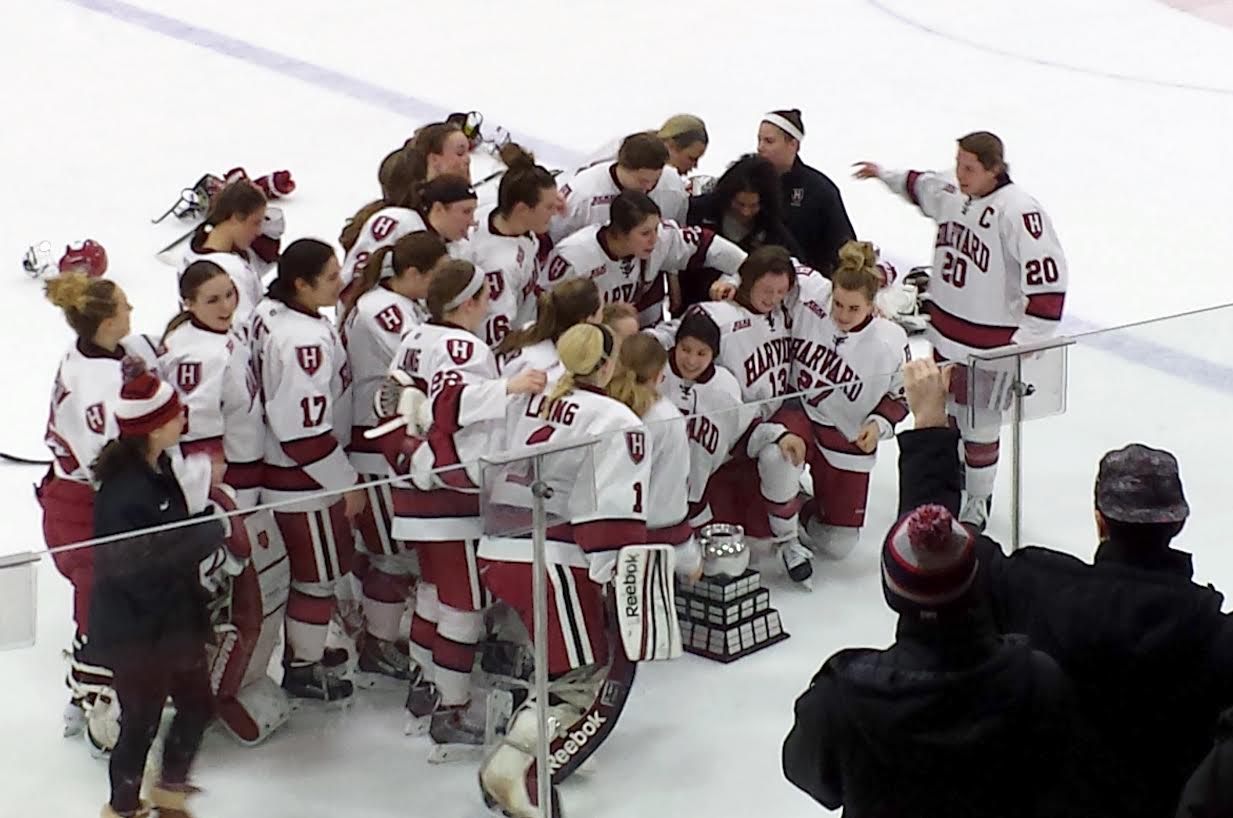 After being routed by Boston College earlier in the year, the Crimson got its revenge in the Beanpot final, defeating then then-No.1 ranked Eagles, 3-2. By Jake Meagher
By Cordelia F Mendez, Crimson Staff Writer

On Nov. 28, 2014, then-No. 1/1 Boston College handed the then-No. 7/7 Harvard women’s ice hockey team the most punishing loss it would see all season. Across town at the Conte Forum on a Friday afternoon, the Eagles trounced the Crimson, 10-2, with a stretch of eight unanswered scores coming in the second and third frames. It was certainly not the early-season boost that Harvard sought.

The loss wasn’t all that out of the norm. Harvard had not beat BC since February of 2010, with a 5-0 victory in the opening round of the Beanpot—losses and ties abounded in the interim seasons.

For nearly five years, the local rivalry was one-sided. But with a revitalized team roster, the Crimson soon ended its drought. Riding the momentum of both a 9-2 win over Boston University in the first round of the Beanpot and a decisive weekend sweep of Yale and Brown, Harvard finally nabbed the long-awaited win at a time when it really counted. On Feb. 10, the then-No. 4/4 Crimson won the Beanpot title with a 3-2 victory over then-No. 1/1 Eagles at home at the Bright-Landry Hockey Center.

The win was superlative in many ways—it was the first loss of the season for BC and Harvard’s first Beanpot Championship since 2010, giving the Crimson its 14th tournament crown.

“I think that learning what a loss feels like, I hope it helps us in the future, and [so does] playing in a tournament game” said BC coach Katie King-Crowley after the game. “We’re fortunate.”

While the Eagles may have struck first—a goal just a minute and a half in by Andie Anastos put BC on the board early on—Harvard prevailed as a trio of Harvard skaters—junior Mary Parker, rookie Karly Heffernan, and junior Miye D’Oench—notched scores to eke out the win, despite an unassisted goal from BC’s Haley Skarupa that gave her team a brief 2-1 lead midway through the second frame. 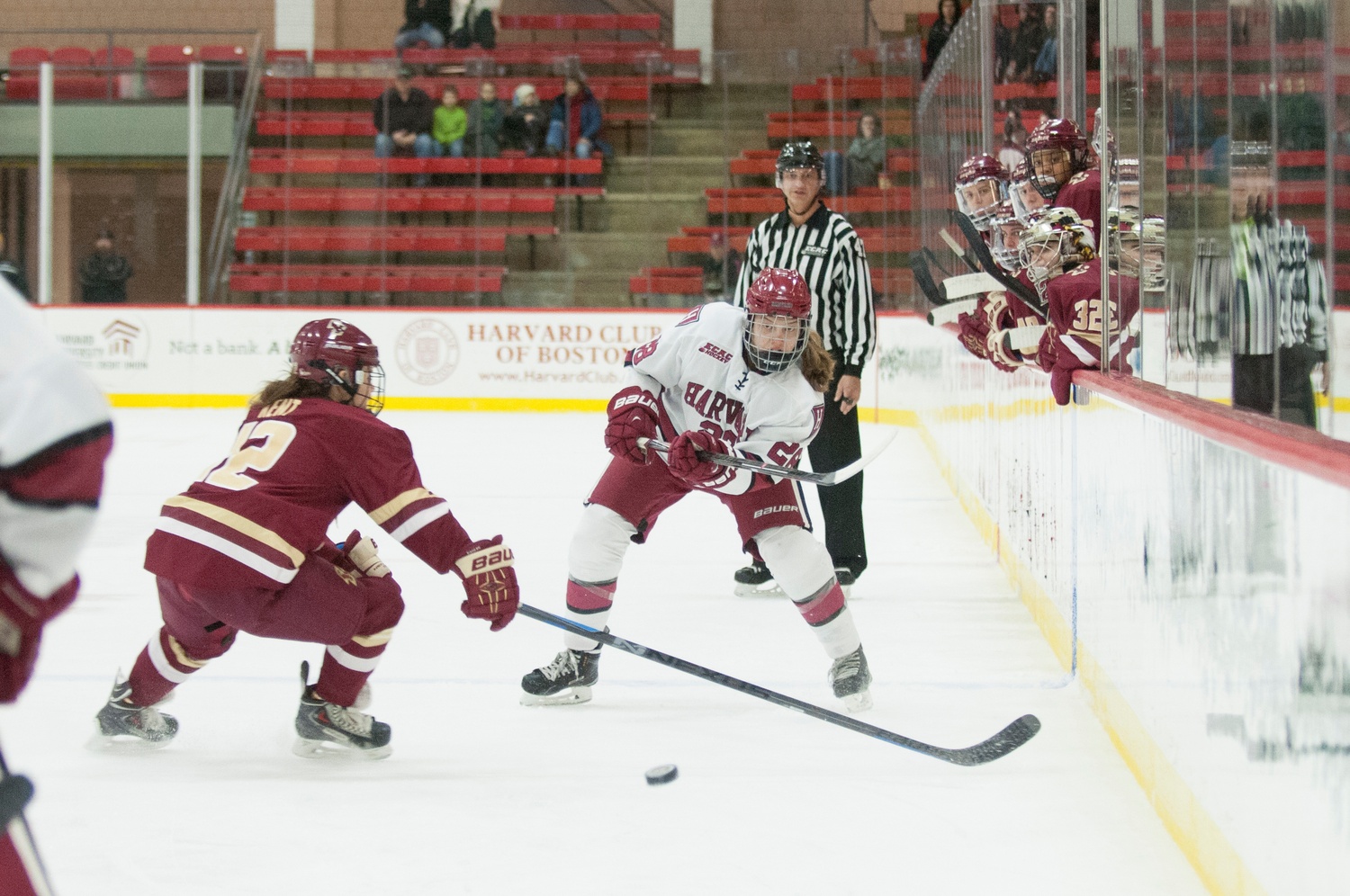 The Beanpot title came after the Crimson fell to Boston College earlier in the season by a 10-2 score. By Jake Meagher

“One of the big turning points was when actually when BC scored their second goal,” said Harvard coach Katey Stone after the game. “I think it really woke us up and ticked us off a bit. We were a different hockey team after that than we had been in the beginning.”

On the other end of the ice, then-junior Crimson goalkeeper Emerance Maschmeyer held steady for 30 saves, paving her way to the Beanpot MVP. Tight defensive play proved crucial all around, as BC shut down four of five penalties and Harvard killed all seven shorthanded situations.

More notable than the quality of play was the significance of the win. In one game, the Crimson reversed the fortunes of a gritty local rivalry, handed the national favorite its first loss of the season, and ended the Beanpot drought.

“What a great hockey game to be involved in,” Stone said. “Two great teams on the ice. A lot of talent. A lot of emotion.”

—Staff writer Cordelia F. Mendez can be reached at cordelia.mendez@thecrimson.com.