Reiterating his focus on individual growth, Dean of the College Rakesh Khurana again promoted his vision of Harvard College as a place that should spur “transformation” in the Convocation ceremony Tuesday afternoon.

From his self-deprecating humor—“It’s easier to become Dean than it is to get into the College, and I am so, you know, over that”—to emphasis on “transformation,” Khurana delivered a speech to freshmen almost wholly similar to his speech at last year’s Convocation. 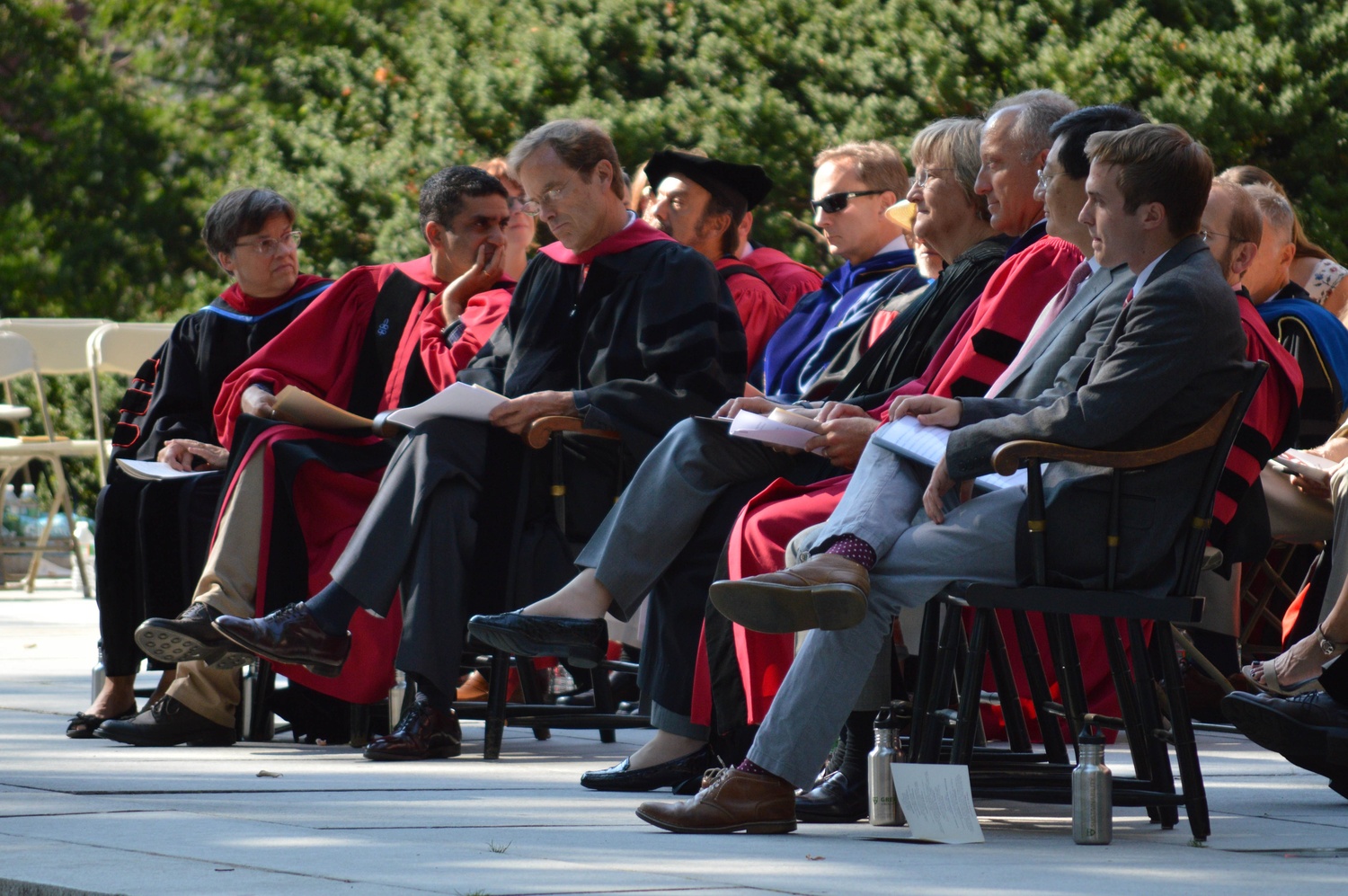 Various administrators, including Dean of the College Rakesh Khurana, Dean of Freshman Thomas A. Dingman ‘67, and University President Drew G. Faust, sit on the stage in Tercentenary Theatre during Freshman Convocation. By Y. Kit Wu

As he did last Convocation, Khurana referenced his daughter, now one year older, to describe perceived ills in the college admissions process and the culture he believes it fosters. Rather than viewing their College experience as one focused on acquiring the highest grades or landing the most prestigious job, Khurana called on freshmen to challenge and discover themselves.

“You may feel that you’re expected to do high school all over again, to jump through another set of hoops and prove yourself,” Khurana said. “You don’t [have to]. You are already admitted to Harvard.”

Referencing a distinction he has often outlined since he became Dean of the College a year ago, Khurana cautioned undergraduates against viewing their four year experience as “transactional” and taking calculated but risk-averse steps to score high grades and achieve material ends. Instead, Khurana reemphasized a word that has almost become the unofficial brand of his deanship: transformation. Subdivided into three categories—personal, social, and intellectual—Khurana said a "transformative" experience involves self reflecting, befriending those who are unlike you, and enrolling in courses out of interest for learning, not marks.

Without these goals in mind, Khurana said, undergraduates may finish their experiences with “with a degree, but not a Harvard College education,” Khurana said.

In a separate speech, Jonathan G. Jeffrey ’16, a member of the Honor Council and co-chair of Mather House Committee, continued a theme of personal reflection, arguing, like Khurana, that freshmen should not feel compelled to prove their worthiness of studying or excelling at the College.

“I wanted to have a resume, a transcript, and an image that left no doubt in the minds of those around me that I belonged at Harvard,” Jeffrey said, recounting his freshman year. Referencing the College’s new honor code, Jeffery later added that by focusing on personal integrity in making academic and social decisions, students might achieve what he called a “personally transformative experience.”

Other speakers, including University President Drew G. Faust and Dean of the Faculty of Arts and Sciences Dean Michael D. Smith, offered their own advice to freshmen. While Faust encouraged the assembled undergraduates to surprise themselves, Smith, as he has in previous years, reiterated a motto of “don’t compare, connect.”

At the end of the ceremony, Undergraduate Council President Ava Nasrollahzadeh ’16 and Vice President Dhruv P. Goyal ’16 unfurled the crimson-colored Class of 2019 banner. As Dean of Freshmen Thomas A. Dingman ’67 called off each freshman dorm individually, the undergraduates, many with hair slicked back and donning formal attire, belted cheers and later processed to Widener steps for their annual photograph.