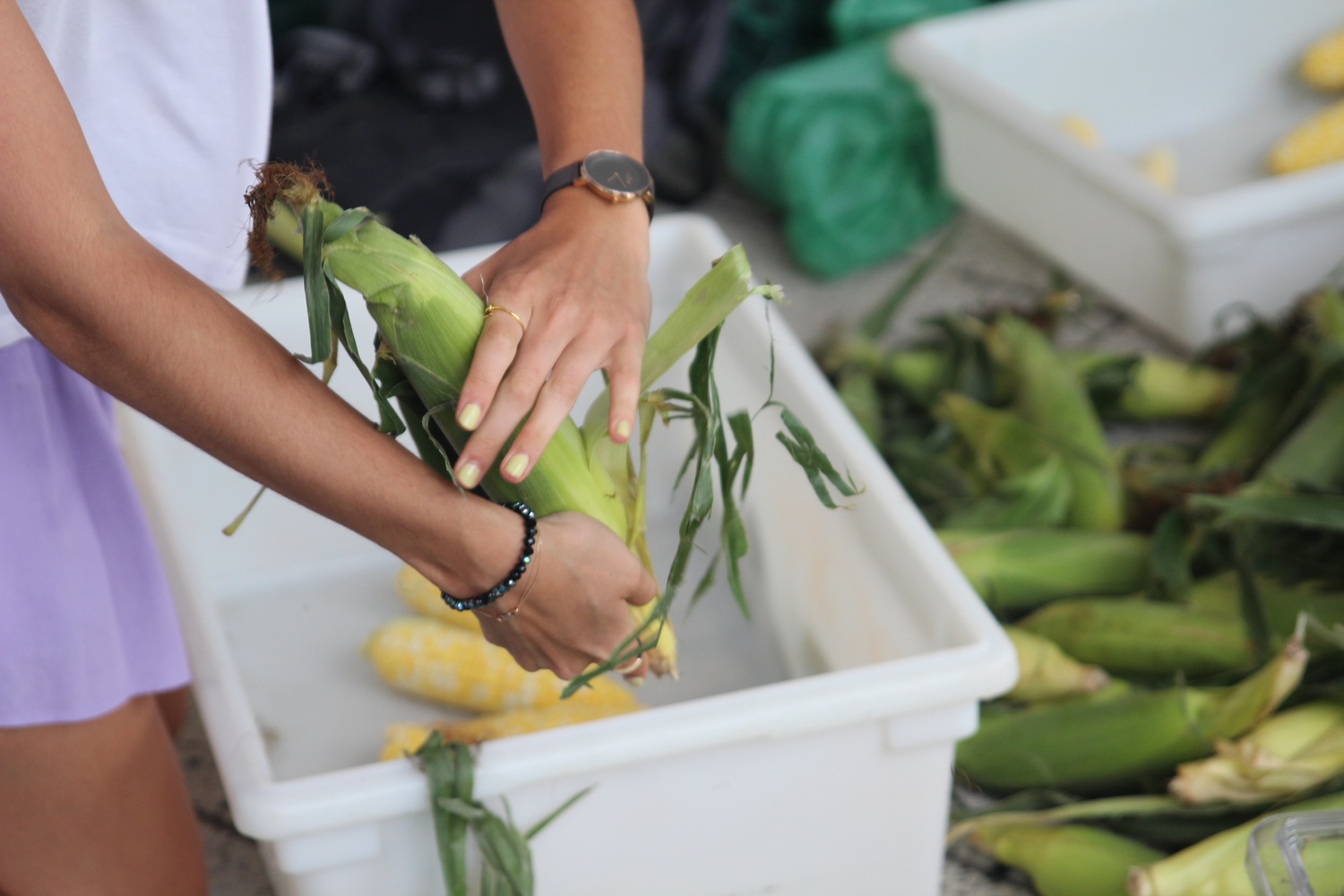 Students compete in the Harvard ‘Shuck Off’ at the Farmers’ Market in the Science Center Plaza on Tuesday afternoon. The winners of the competition won fresh corn for their dining halls. By Katherine L Borrazzo
By Jessica Kim, Crimson Staff Writer

More than 20 local vendors set up stalls under the Science Center Plaza tent on Tuesday for the weekly Harvard Farmers’ Market, held from mid-June until November. From fresh produce to mini cheesecakes, the variety of merchandise attracted numerous Harvard affiliates, Cambridge residents, and tourists despite the balmy weather that at times reached 90 degrees.

Since the Harvard Farmers’ Market’s opened in 2005 as a project of Harvard University Dining Services and the HUDS Food Literacy Project, various merchants have returned to their booths over the years.

“We’re both certified organic and IPM [Integrated Pest Management] conventional, and we’re famous mostly for our fruit,” said Jeff Newton, the vendor representing Lanni Orchards, a family-owned business established in 1963. According to Newton, Lanni Orchards has been selling at the Farmers’ Market at Harvard for 10 years.

In a different aisle of the market, students could be seen sampling chocolate from the stall set up by Taza Chocolate, a Somerville-based company that has partaken in the Harvard Farmers’ Market in previous years.

“We started off in a little kitchen, and now we have a factory just a mile away from this farmers’ market,” said Ayala Een-Chaim, a Taza Chocolate representative. According to Een-Chaim, the company buys cocoa beans directly from farmers across Central and South America and processes them in their factory in Somerville.

Some vendors, like hot sauce company Alex’s Ugly Sauce, debuted at the market for the first time this year. According to Mary Greenfield, the vendor, Alex’s Ugly Sauce sells five different types of hot sauce that uses the same basic ingredients of vinegar, beets, onions, garlic, and honey. This four-person company produces all of its sauces by hand in Dorchester.

The market not only featured edible goods but also other products, such as the flowers sold by Stow Greenhouses. Alexander N. Lee ’17 has been working for the company at different farmers’ market locations throughout the summer.

“It’s entirely farmers’ market-operated, so there’s no storefront,” Lee said. “They just have a fleet of vans that sends out flowers every morning to a bunch of farmer’s markets.”

He added that the Harvard Farmers’ Market differs from other locations due to the seasonal fluctuations in sales. The influx of students at the beginning of the semester accounts for a peak in sales at the Harvard location, Lee said.

—Staff writer Jessica Kim can be reached at jessica.kim@thecrimson.com.