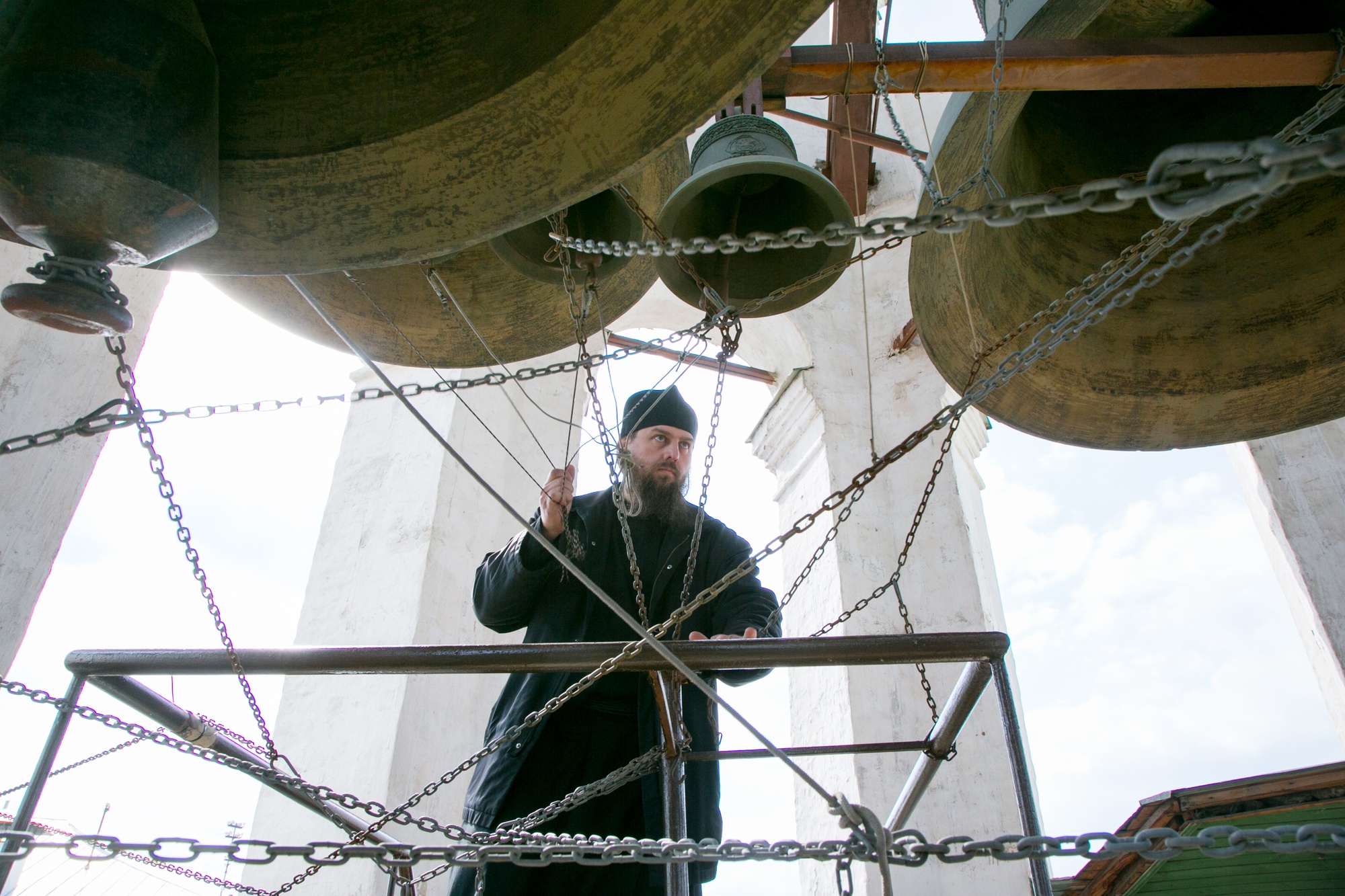 Father Roman, hierodeacon of the Danilov monastery, has come to tutor a new generation of disciples in the ancient art of Russian bell-ringing. By Courtesy of Hierodeacon Roman
Advertisement
Advertisement

For Whom the Bell Tolls

Bell-ringing, to Father Roman, is a marriage of art and science: campanology.
By Katie C. Berry

Illuminated jack-o-lantern orange from below, the Lowell bells shatter the nighttime hush. Craning my neck to see the tower, I feel tiny and just a little anxious about the onset of tinnitus. The bells seem to slice through the air of their own accord until I catch sight of first a spectral hand, then a looming figure. With clothing as black as night, his head seems to float against the starless sky.

This figure is not, at least to my knowledge, performing an exorcism on the Lowell bells. His name is Father Roman, and, as hierodeacon of the Danilov monastery, he’s come to tutor a new generation of disciples in the ancient art of Russian bell-ringing. If there’s any black magic involved, he doesn’t care to mention it in our conversation—or maybe I ask the wrong questions.

“I sometimes can look frightening,” Father Roman says the next day. “I do not mean to cause these faces of fear.” I laugh, as if I can’t imagine being scared by him. Certainly, on this cloudless morning, he doesn’t look occult: He smiles in a way that sends his eyebrows shooting up under his cap, and his blue eyes twinkle. Yet I’m keenly conscious of how intimidating the expanse of wiry red beard and floor-sweeping black robe seemed the evening before, when I tried to look at his face and couldn’t see past his chest. It was oddly reminiscent of gazing up at the bell tower.

Both he and it are, for the moment, quiet. I don’t know if I’m just too enamored of my own analogy, but I am surprised when his voice lacks any sonorous quality—it does the opposite of reverberate, and I have to lean in to catch his thoughtful murmur. His black robes, less stark in the sunshine, are complemented by black shoes, a black coat, a black cap. I catch a glimpse of a black watchband under his sleeve; he has a black rolling suitcase by his side. The color lies in his huge red beard and in his art.

His primary artistic medium is bell-ringing, but Father Roman loves painting, too. “When you ring bells, you combine tones, like paints, into a sound picture,” he says. “Both are a way to express your inner world, to hear colors.”

Bell-ringing, to Father Roman, is a marriage of art and science: campanology. “As a subject, it’s quite narrow,” he concedes, before launching into a summary of campanological theory. He’s well-versed, having studied at music school for seven years. He subsequently participated in and conducted a choir, and he conducts his own campanological research, all to promote the “very special” knowledge of “the language of the bells.” He hopes to spread it here, as part of the Lowell House Society of Russian Bell Ringers’ cultural exchange.

Bells are not Father Roman’s sole purpose in visiting, though. “I also like American nature,” he says earnestly, and for one hopeful moment I think that he’s complimenting our collective personality. “I mean natural parks and different landscapes,” he clarifies, and gestures around us at the damp greenery of Lowell courtyard. He aims to spend some time in a different national park every time he visits Harvard—call it inspiration, if you will, for his responsibility as landscape architect for his monastery. For this trip, his 10th, “I think Yosemite.”

He is “first a deacon,” second a campanologist, but bell-ringing is nonetheless his passion. Having grown up in the suburbs of Moscow, he rang his first bells at the age of 13 for church services, but didn’t grow to love them until he came to the Danilov monastery and was appointed bell ringer there. He helped to found a bell-ringing center in Moscow and was crucial to restoring the Danilov bells to their rightful home from Harvard. (The current Lowell bells are replicas, installed in 2008.)

When I ask him why he plays the bells, he seems almost pained, or at least I assume that’s what the sudden halt in his thumb-twiddling signifies. I’m about to venture another question, worried that I’ve upset him, when he finally speaks. “Playing the bells, trying something new—it makes you a better person,” he says.

I try something new by witnessing one of Father Roman’s bell-ringing workshops. Part of one, anyway. I intend to try more new somethings and attend the lesson in its entirety, but I underestimate the number of steps required to scale the belfry. (Learn from my mistake: It’s 128.) By the time I’ve surmounted the last narrow metal ladder, I’m too winded to celebrate, and wordlessly join the small group watching from the corner as Father Roman and his team conclude their lesson.

They give the largest central bell a final, judicious tug that makes my teeth chatter. In one choreographed movement, as if a signal were given, everyone present rises and rests a palm on the swaying behemoth. I am hypnotized and have to be prodded to my feet. I expect the bell to buzz angrily under my fingers, a bee trapped by a window—but the giant bell purrs under my hand.

The thrum continues for what feels like whole minutes, hanging electric in the evening air. Finally, Father Roman clears his throat. “I have to go pick my friend up from the airport,” he says sheepishly.

Just like that, the spell is broken: He is no longer an enchanter working his magic over these great cacophonous creatures. He’s just another guy trying to figure out the Silver Line.