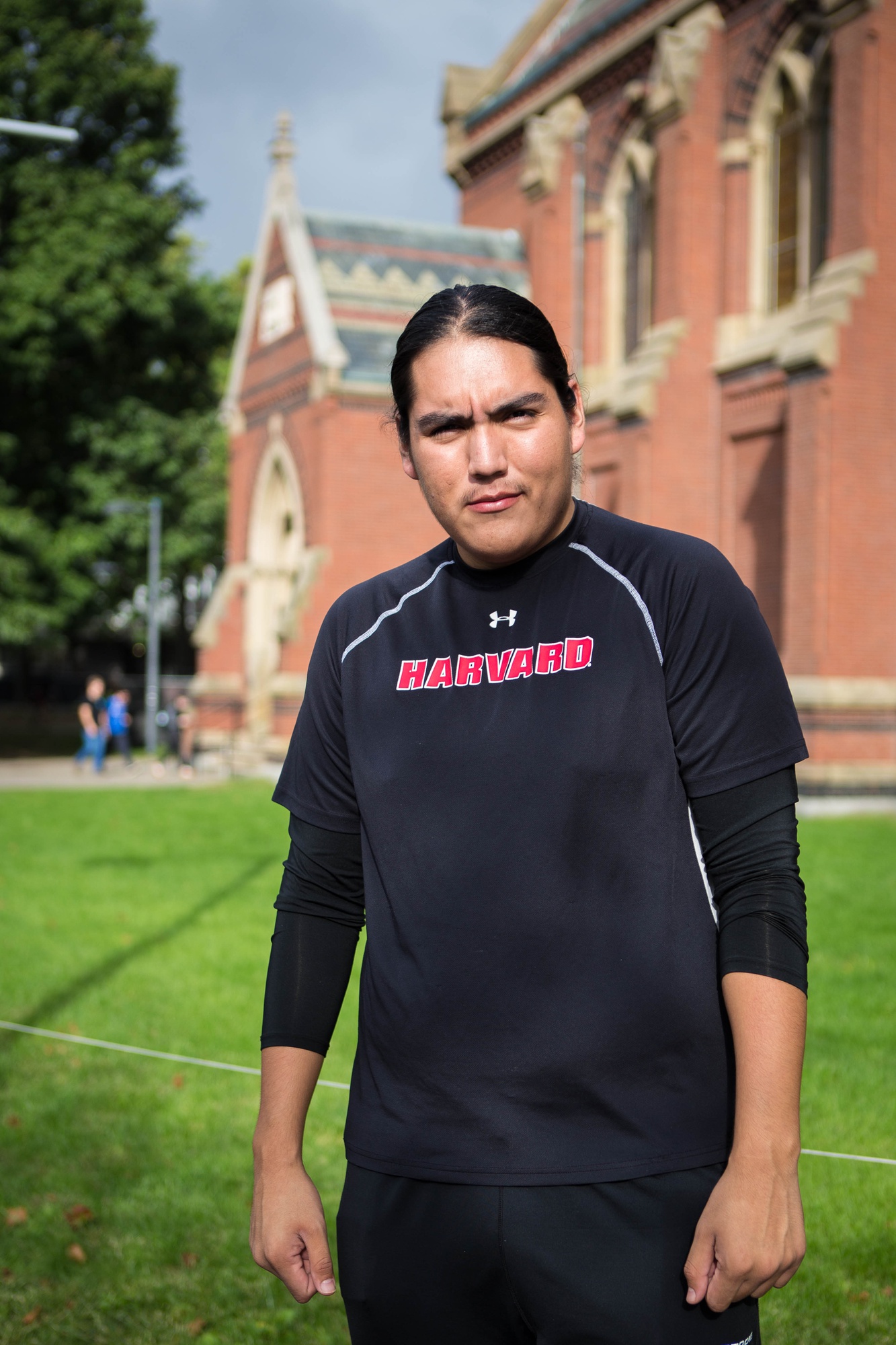 His home in Assayii, New Mexico, a place named for the red rock of the canyons there, is starkly different from the halls of Harvard. “We live where the pavement ends,” Clark says with a laugh. “Literally, there’s a road that’s called ‘The Road to Nowhere’, and I live further on.”
By Emma K. Talkoff

“Do you know about Caleb?”

It’s 9 a.m. in Annenberg, and the dining hall is full of students eating and working before class. Damon J. Clark ’16 wears a Harvard t­-shirt, his long black hair twisted neatly behind his head in a traditional string fastener called a tsiyeel.

He’s gesturing across the dining hall at the portrait of Caleb Cheeshahteaumuck, Class of 1665, who was the first Native American to graduate from Harvard. Cheeshahteaumuck’s portrait was added to Annenberg in 2010 as part of the Harvard Foundation Portraiture Project, which aims to bring diversity to Harvard’s notoriously homogenous portrait collections by honoring people of color who have played important roles in the University’s history.

For Clark, president of Native Americans at Harvard College, this kind of representation is crucial.

“Image matters, the mention of Native Americans matters,” Clark says. “Because most times at Harvard, I’ve been the first Native American that anyone has ever met.”

Clark is Diné, the preferred name for the group of indigenous people classified by the United States Government as Navajo, a label which Clark points out has a complicated history (the term “Navajo” was initially a derogatory term applied to the peoples inhabiting parts of present­day New Mexico). In fact, there’s little about Native American identity that isn’t complicated by history, says Clark.

Clark is a part of Near the Water Clan, a designation passed down through generations of his family on his mother’s side, in keeping with the Diné’s matriarchal tradition.

His home in Assayii, New Mexico, a place named for the red rock of the canyons there, is starkly different from the halls of Harvard. “We live where the pavement ends,” Clark says with a laugh. “Literally, there’s a road that’s called ‘The Road to Nowhere’, and I live further on.”

His family lives without running water and only solar­powered electricity, growing traditional crops like corn and squash (but also, Clark notes, trendier greens like kale, because “culture isn’t static”). When he’s home, Clark is a farmer.

“[Home] provides a whole different lifestyle,” Clark says. “I’m able to have fresh air, and it’s so quiet, the very opposite of Cambridge. I know that when I go home, that’s where my family is, and that’s who I am.” A part of that identity is rooted in Clark’s great-­great­grandfather, Chief Manuelito, who led resistance efforts against the forcible relocation of the Diné and helped broker an 1868 treaty that secured a reservation for them. That legacy looms large for Clark. 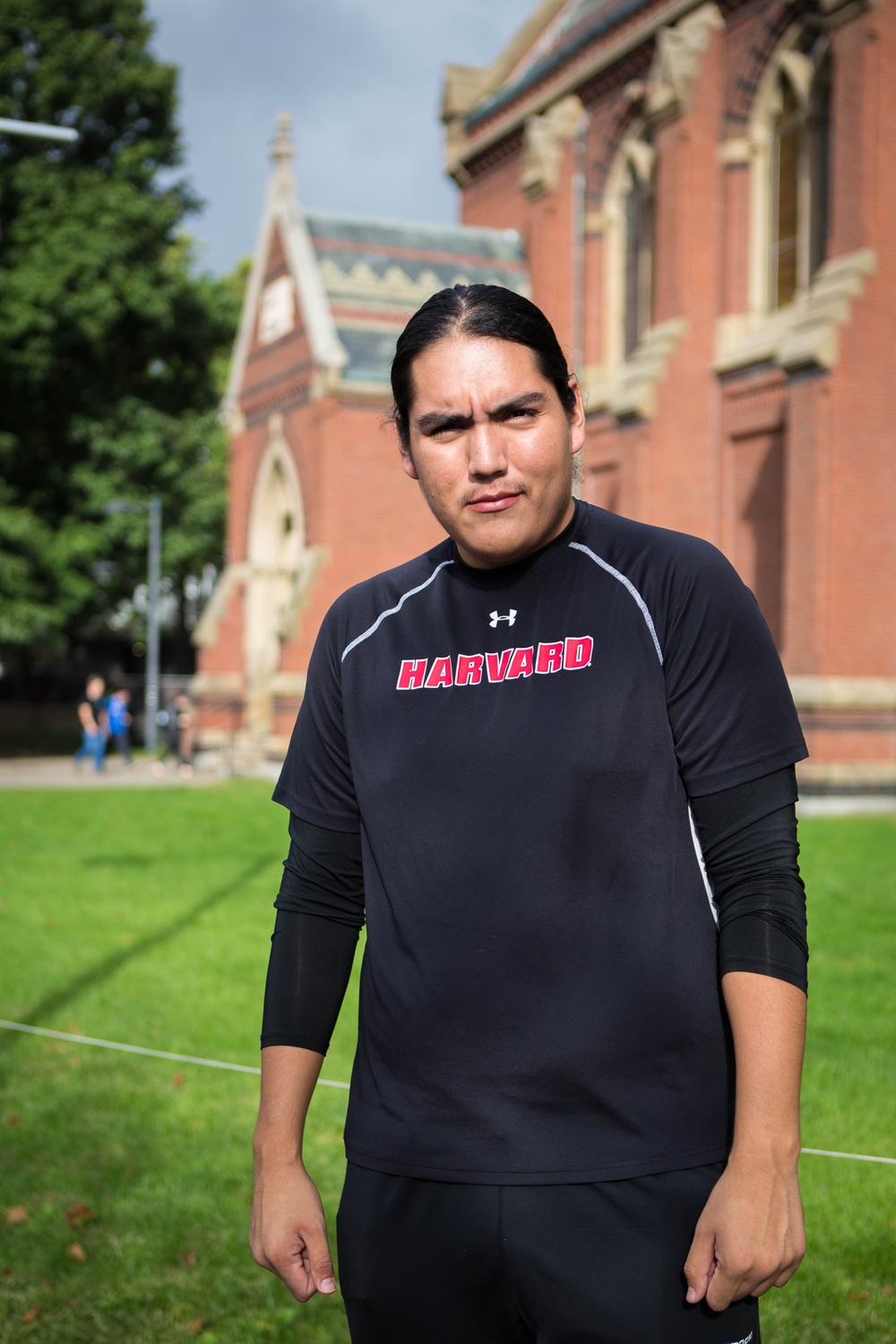 In part because of this history, Clark sees himself as a “public servant,” working actively to increase representation and advocacy for Native Americans on campus and beyond. Last year, Clark was part of a group of students who petitioned for Harvard to recognize Navajo as a foreign language; a Navajo language course was offered by the University for the first time last spring. Clark, who is not fluent in Navajo but can smoothly introduce himself , says that language—like preservation of the Diné’s matriarchal society and traditional farming practices—is a “key” to living the culture of his people.

Clark and the wider NAHC’s goals at Harvard extend well beyond language instruction. Right now, the group is actively petitioning for the University to officially adopt Indigenous Peoples’ Day as a replacement for Columbus Day, a move already taken by the City of Cambridge and peer institutions including Brown.

“This movement is really about reclaiming an indigenous identity. A lot of the students feel like not only are we not celebrated, we’re not even mentioned,” Clark says.

He’d also like to see more of an academic presence for indigenous people, from full-­time indigenous faculty to the formation of a Native American Studies program.

“But if I do not present that, who else will?”