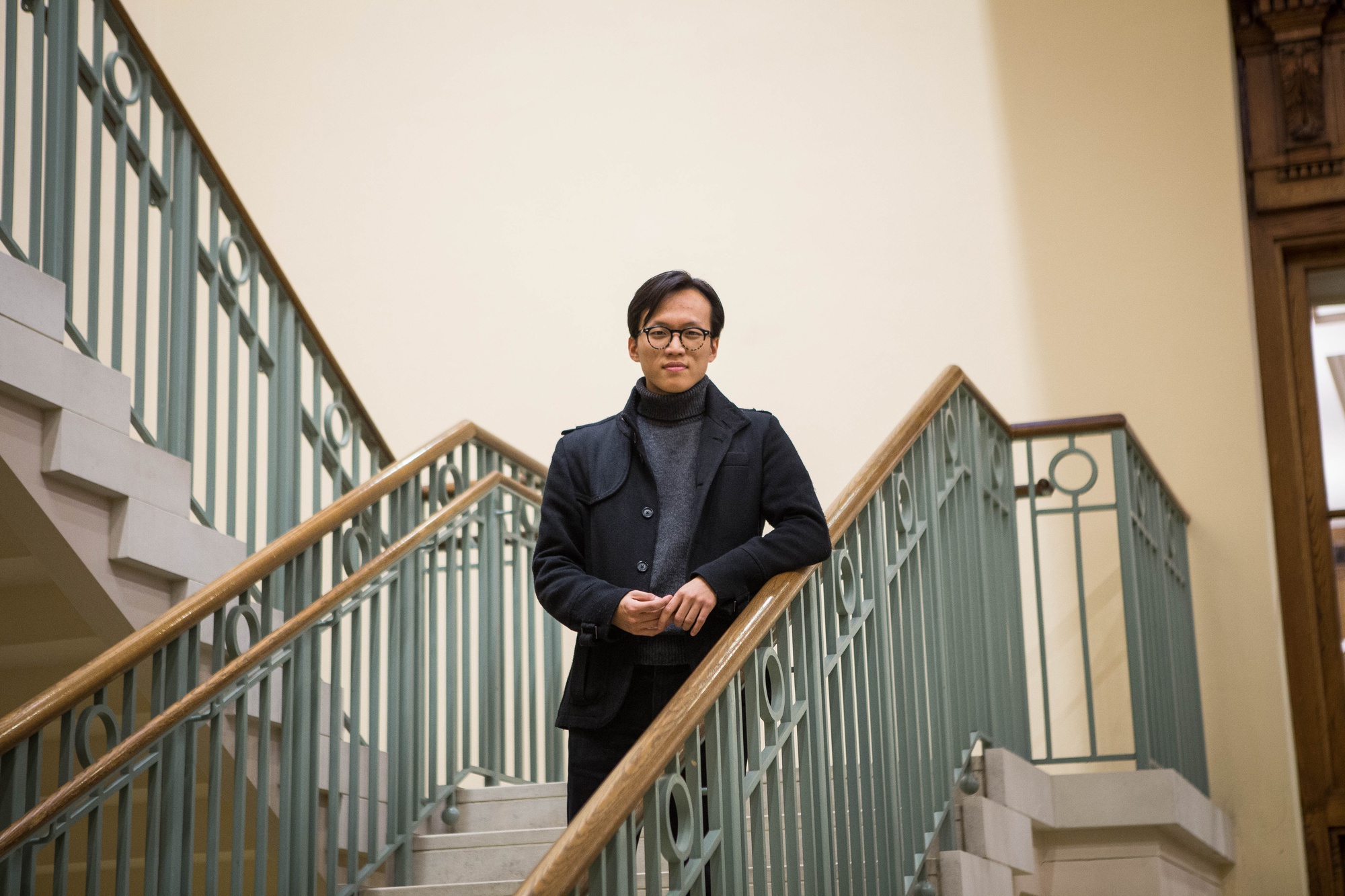 Bo H. Seo ’17 perches on a couch in the Barker Center Café, surveying the room from behind round, half-tortoise shell glasses.

“I don’t even really think of myself as interesting,” Seo says, though a quick Google search on him suggests that he’s worthier of the title than he lets on. “Just really interested. And interested in a lot of different things, and interested in those things deeply.”

A two-time World Debating Champion, Seo has found his greatest success in the art of arguing.

He describes debating as the “fullest experience of genuine teamwork I’ve ever had.” In high school, Seo debated against fellow Harvard senior Fanelesibonge S. Mashwama ’17—Seo for Australia, where he attended high school, and Mashwama for Swaziland. The two then joined forces at Harvard, taking home the 2016 World Debating Championship as a team. Now, they’re

A Social Studies concentrator living in Pforzheimer House, Seo has put his mind to work off the debating stage, as well. Since coming to Harvard, Seo has spent his semesters and his summers studying and promoting human rights.

“There is this mysterious entity called ‘human rights’ that’s emerging through all of this work, and trying to parse out what those things are—what it is, what it isn’t, what it presses us to do—that’s been really interesting,” Seo says.

Seo’s dedication to human rights is also tied to his global upbringing. Born and raised in South Korea, Seo moved to Australia at age 10. Listening to his eloquent, Australian-accented speech, you’d never guess that Seo didn’t know a stitch of English when he started school in Australia in 4th grade. Learning English over the course of the next year, says Seo, was a formative experience.

“As children we endure a lot and experience a lot, and I think the rest of your life is just reverberations of that original moment,” Seo says. “For me, I’m pretty attentive to how people are responding to things or to me.” 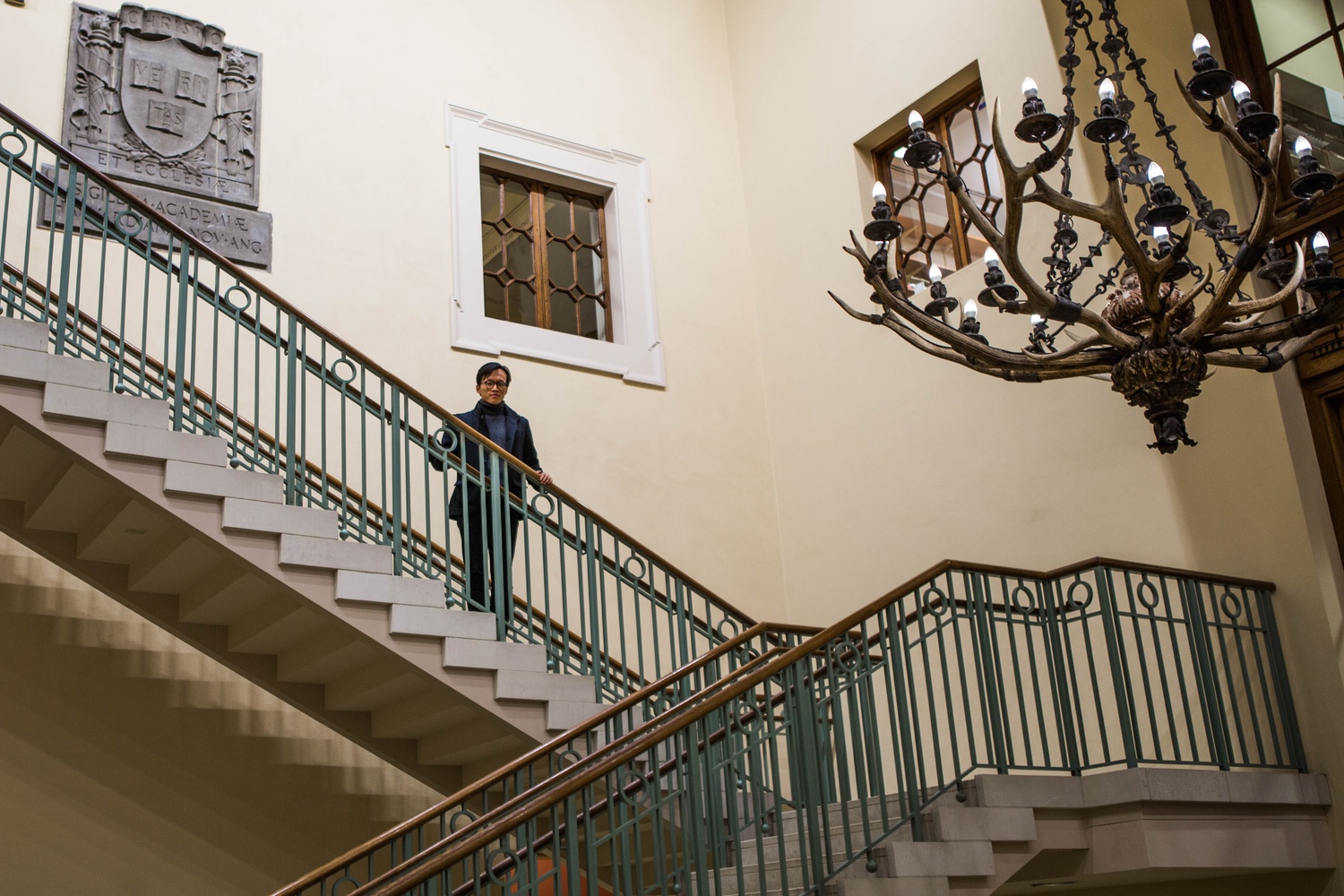 Seo describes how conscious he is of other people’s facial expressions and body language, a habit from a time when eye contact and hand gestures were easier to understand than language.

Seo is currently writing his thesis on the “recognition of identity and culture and situating that between identity politics and the contemporary doctrine of human rights,” so he is indeed turning his 10-year-old self’s experience into an opportunity for research.

Seo’s latest project? Assembling a literary anthology on Korean diasporic perspectives on North Korea. Seo has assembled students from cultural groups and publications across campus to create literary and visual art. “I thought there was a role for me to bring people together,” he says, adding that he hopes the project will be published as a book.

In addition to his academic accomplishments, Seo is a black belt in Taekwondo. “There’s still something about that kind of very disciplined performance that kind of speaks to me,” he says. These days, though, Seo prefers yoga to his previous dedication to martial arts. He concedes that others think it’s “basic” that he practices yoga at the Square’s Barre and Soul, but he brushes off these criticisms.

“They told me the other day that my hips need to have more integrity, which I’ve never been told,” Seo says with a laugh.

Seo combines these diverse interests with care for other people, which he insists is the most important interest he possesses.

“It’s not as if they become interesting because you met them,” Seo says, speaking about the people he’s met at Harvard. “They’ve always been interesting—you just didn’t know about it.”