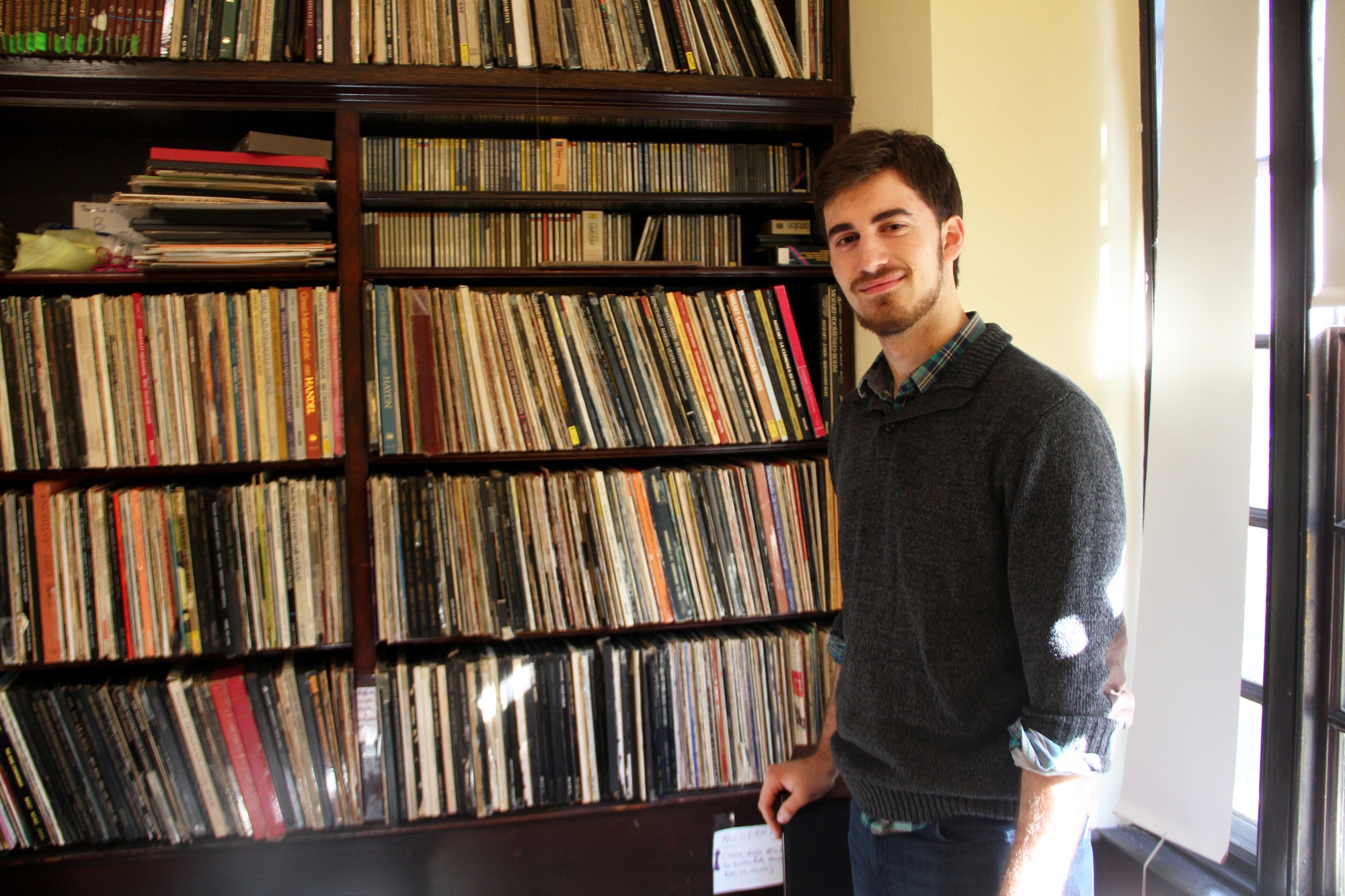 By Amelia G. Miller, Crimson Staff Writer
A resident of Eliot House and the house's official librarian, Tim runs the record room, the recording studio, and the Eliot bike-sharing program. Here, he stands in the record room after putting on Chopin's Nocturne No. 1. By Isabella S. Beroutsos

“I just like opening doors,” Tim E. LaVelle ’17 says as we duck into a dark, narrow passageway in the basement of Eliot House. This tunnel, which opens by the underground art room, is one of many Eliot secrets LaVelle has stumbled upon during his three years in the House.

But unearthing House secrets is far from the only thing LaVelle has done for Eliot. He runs the record room, the recording studio, and the Eliot bike-sharing program, and he’s the official House librarian. If this sounds like a lot, that’s because it is. “At the beginning of the year, it definitely feels like a full-time job” LaVelle says.

LaVelle says that he picked up these jobs naturally over the course of his time in Eliot. The record room, for example, is his favorite place in the House. Tucked away in E entryway, the room is bare yet homey, with only a couch, a shelf lined with records, and a record player. To the tune of Chopin’s Nocturne No. 1, one of his favorite records, LaVelle tells me that he’s reorganized the record collection alphabetically. He’s also started a weekly music listening hour on Wednesdays from 9-10 p.m.

LaVelle has been interested in music since high school, when he learned to play the saxophone, and views listening hour as a way to share his passion with others. Each week, he and an Eliot tutor put together program notes on a few classical pieces and listen with about 10 students over cheese and crackers. “If people know about the history of the pieces and a little bit of the music, it becomes much more approachable,” he says.

LaVelle started working as Eliot’s librarian in the beginning of his junior year. His work involves mostly re-shelving, but the appeal was “just the knowledge,” he says. He shows me two famous biographies of Charles Eliot that he describes as “the fountain of all [his] facts.” LaVelle hasn’t finished the books, but to a Charles Eliot rookie like me, his knowledge seems encyclopedic. LaVelle offers me his best Charles Eliot facts: Eliot was the longest serving and youngest president of Harvard, and he tried to buy MIT five times.

“I just like doing lots of different things,” LaVelle says, when I ask him how he picked up his other Eliot jobs. This attitude defines not only his roles in Eliot but also his course of study: LaVelle is a joint concentrator in Bioengineering and German. He picked Bioengineering because “it has a real breadth of information” and chose German serendipitously; he took it for the first time to complete his language requirement. LaVelle has spent the last two summers working in Germany and hopes to return after graduation.

Despite a rigorous academic schedule and so many Eliot responsibilities, LaVelle is also acting in a German play called “Hin und Her” (“Hither and Fro”) about border politics, and is the captain of the club broomball team. But, LaVelle admits, “If I’m going to be honest, I’m known as the Eliot man.”

This is a title LaVelle embraces, but as graduation nears, it’s one he’ll have to give up. LaVelle reassures me that Eliot will continue to run smoothly—he has students lined up to take over his many jobs. As for him, leaving Eliot will “be a big change, no doubt,” he says. “I have jobs, and I run rooms, but in reality it’s for the people. I’ll miss the people.”