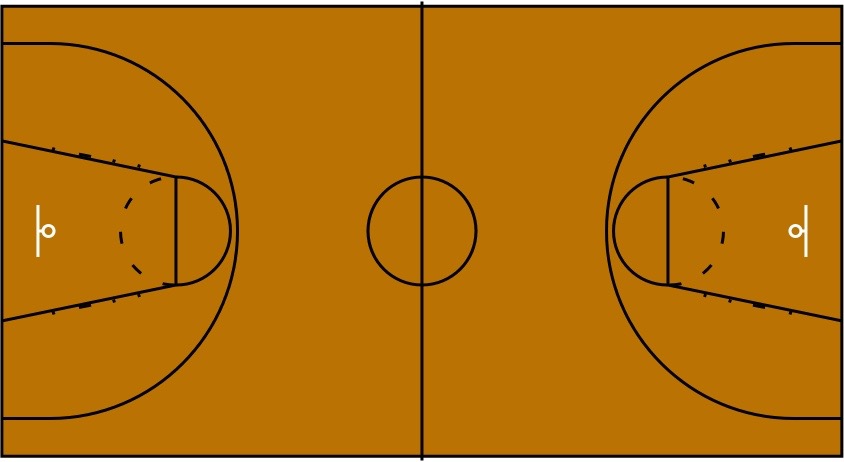 The Highest Court in the Building

The Law School’s Hemenway Gymnasium has been graced by law school legends ranging from Barack Obama to Ted Cruz.
By Aaron J. Miller

That’s the term students have coined for the basketball court on the top floor of the Law School’s Hemenway Gymnasium, which has been graced by law school legends ranging from Barack Obama to Ted Cruz and continues to serve as a sort of second home for some students.

“It’s a different type of vibe,” says third-year Law student Jonathan Wall (no relation to the NBA player of the same name), who is on the court more days than not. “It’s something about the gym being small. You’re kind of forced to know everyone who comes in there. That’s one of the main things that make it special.”

Hemenway’s court conjures up flashbacks to basketball’s earlier days. The sub-regulation-sized court’s lines run just feet from the gym’s bare white walls. The three point lines are a hop step from half court, and two massive box fans unsuccessfully attempt to make up for a lack of air conditioning in the warmer months.

But the aesthetics aren’t the only old school thing about Hemenway: Games get chippy. You only call a foul if you mean it. First to 18, twos and threes. Always full-court.

President Barack Obama is said to have been a Hemenway regular—by some accounts, he laced up once or twice a week; by others, nearly every day.

“He had a decent shot, could drive to the basket and had good reach,” says Seth Farber ’86, who graduated from the Law School in 1989, overlapping with Obama for a year. “Interestingly, his demeanor in those games was similar to his demeanor now. He was one of the more level-headed, even tempered players.”

“If there was any knock against Barack, he pulled his socks up a little too high and his shorts were a little too small,” actor Hill Harper, a close friend of Obama’s from Harvard, once told the Dallas Morning News. “We were just at the beginning of the Michael Jordan era. He more harkened back to the Julius Erving era.”

Ted Cruz, not exactly known for his similarities to President Obama, lived next door to Hemenway, and also frequented the court for intramural basketball and volleyball.

All this history might not be immediately obvious to someone stepping into Hemenway for the first time. The gym has gotten several facelifts since it was built in 1938, including one last winter.

“Everything looked really new to me since I stepped in there, so I never thought about the history,” Wall says. “But you look at the list of alumni, there’s no way they didn’t step in the gym at least once and play basketball.”

The current group of regulars, which coordinates through GroupMe, now looks to continue that legacy.

Wall, from Raleigh N.C., attended Morehouse College and the Harvard Graduate School of Education before law school and said he initially struggled to find the time to play basketball before cementing it as a priority.

“A lot of times, it could seem so crazy that I spend this time not in the study room,” Wall says. “But basketball means that much to me and this group of guys, too.”

For many students, the gym also serves as a respite from the lecture rooms and laborious routines at Harvard.

“All these guys: I’ve been in heated battles against them and with them by my side,” Wall says. “That just brings people together in a more organic way than some of the artificial things that you see in the Law School, like clubs and organizations to put on your resume.”

“Basketball is basketball. But it was the people that made the experience unique,” Tristan Threatt ’18 tells me. “You’re able to listen to the guys who are there and learn from their experiences.”

That said, in many ways, the nuances of play are vintage Harvard Law. On the sidelines, players waiting for the next game can often be heard discussing summer jobs and classes. And occasionally someone will try to use legal jargon to explain things happening on the court (e.g. “the presumption of that call…”).

In his first year, Wall recalls, a middle-aged man was “calling crazy fouls,” and they got into a bit of a scuffle. Some of the older Law students, horrified, pulled Wall aside and told him to cool down. The man was renowned Law professor Noah Feldman.

But ultimately, Hemenway is about more than its history and transcends the day-to-day grind of Harvard.

“When people ask me where I’ve found my roots in the Law School,” Wall says, “it’s a difficult question to answer, because I actually feel like it’s in Hemenway in the gym with those guys.”

He adds, “The earlier you realize that it’s more than just pickup basketball, the more fun you’ll have.”