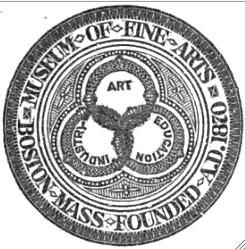 Communist Symbols and a Black Abyss at the MFA

“Those are Communist symbols!” the husband says of the butterflies floating in the scenery. “Those are lemons!” claims his wife.
By Aisha Y. Bhoori

They come in swarms, the kids, and bring with them reminders of their youth and everyone else’s mortality. A makeshift crown, fashioned from red construction paper and protruding staples. A ballerina tutu of fraying sheer pink nylon. A high-pitched cry. A plastic hand drum.

I feel both nostalgic and pained here, watching families pass me by with only a cursory glance or, sometimes, an astute observation or two. “Look at those beautiful women!” exclaims one mother, tugging her toddler’s arm and pointing behind my head. He frowns and hiccups as she speaks in the third person. “They look like Mom when she has her hair pinned back!”

I’m standing in front of the Museum of Fine Art’s latest acquisition, a Frida Kahlo painting—the first Kahlo ever sold and the first of hers to enter a New England public collection. “Dos Mujeres (Salvadora y Herminia),” from 1928, portrays two Mexican maids whom Kahlo had known since childhood and who had worked for many years in her mother’s house. Both women stare at some object not featured, their gazes directed toward the left side of frame. Their black locks are woven in long, thick braids. There’s a clear age discrepancy between the two: The woman in the foreground is younger, with hoop earrings, trimmer brows, plumper lips. The other maid wears her age in the bags beneath her eyes, in her tauter skin, her wrinkles.

For what feels like hours, I walk in and around the vicinity of the painting—listening to, and learning from, visitors. One couple stays for nearly as long as I do, discussing the foliage that forms the backdrop to Salvadora and Herminia’s profiles. “Those are Communist symbols!” the husband says of the butterflies floating in the scenery. “Those are lemons!” claims his wife. While they argue, a mother and adolescent daughter arrive, the former fanny-pack-adorned and the latter wincing. The mother insists on taking a selfie. Though her teen refuses to participate, she remains steadfast; grinning, sweating, humming. She continues like this, exhibiting public displays of unreciprocated affection until, finally: “Diego was a dick to Frida, you know, Stacey? Good thing I’m not like that to you.”

Later, I discover that the reverse side of Kahlo’s painting tells a story, too, when a few members of Boston University’s rugby team point out as much. Beneath “Dos Mujeres” lies a note from the curator, explaining the painting’s first acquisition. One night in July 1929, at her home in Coyoacán, Kahlo sold the work for three pesos to Jackson Cole Phillips, an engineer and industrialist from New York. Kahlo commemorated the event on the back of her canvas, calling it “a most enjoyable evening with the author of the painting.” She inscribed her name, the date, and location underneath this commentary. Kahlo even asked her guests, witnesses to the deal, to add their signatures as well. And so it was that Kahlo’s sister Cristina, her future husband Diego Rivera, and other Mexican luminaries put their pen to the prized paper. “Dos Mujeres” remained a possession of the Phillips family until the MFA purchased it last month.

“I recognize those eyebrows.” A young woman, sporting a gray beanie and a nose ring, interrupts my conversation with the rugby players. She points to the older maid in the painting, the one with bushes arching toward the middle of her forehead. A museum staffer intervenes and tells her that “Dos Mujeres” isn’t “some time-lapsed self-portrait.” The girl looks down at her Doc Martens, embarrassed. “Well,” she says, pointing now at the black cloth hanging from the older maid’s arm, “maybe that’s an abyss, and maybe Frida’s in it.”

There are a few nods, some murmurs. Before any real objections can be made, I leave for the contemporary art exhibit, left to wonder if, perhaps, that abyss is big enough for us all.