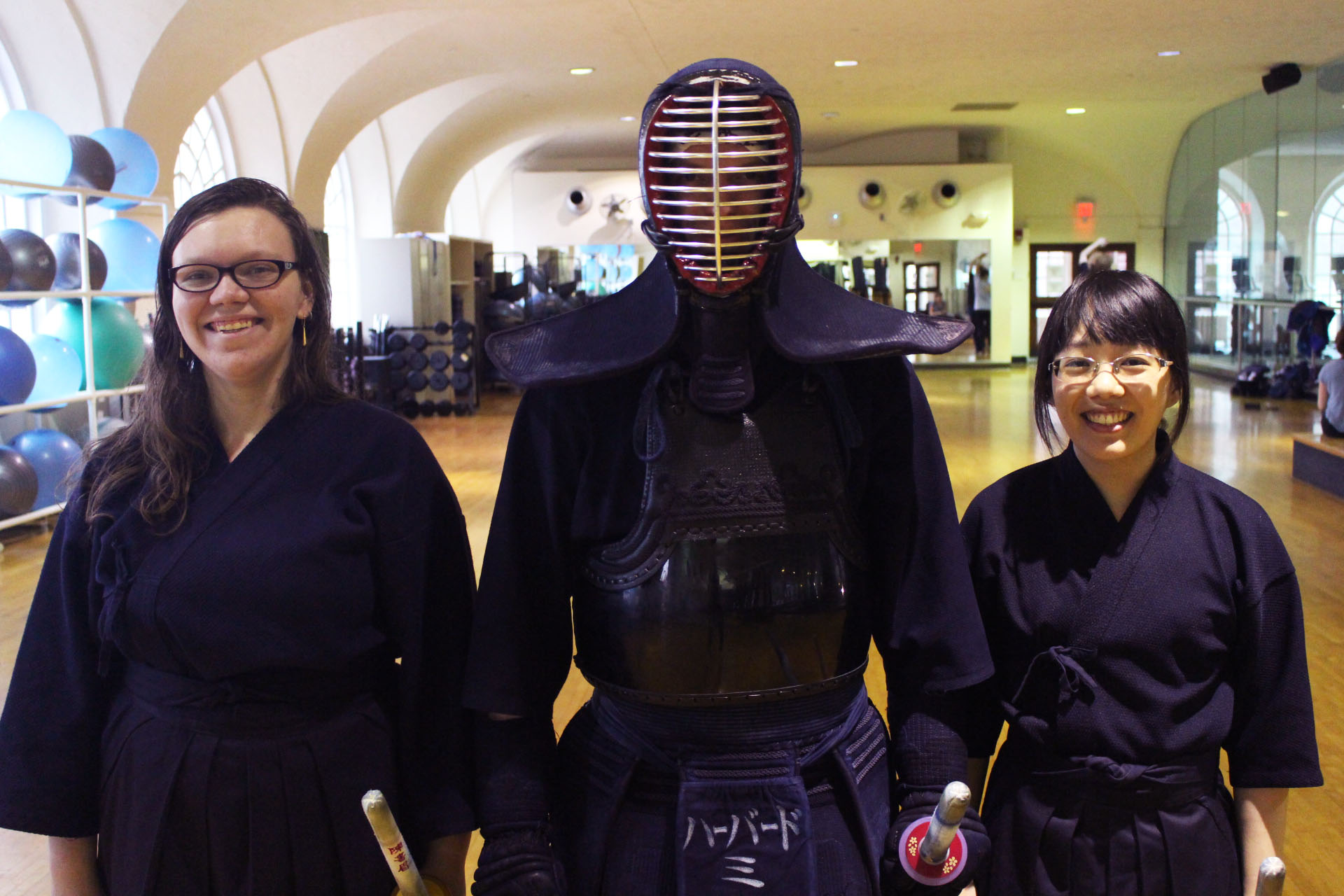 The Sword and the Shogun

If someone told you that samurai warriors wage battle with bamboo swords on Harvard’s campus every night of the week, you would accuse the person of lying. And, of course, you’d be right. Harvard’s samurai only practice four times a week.

This motley mesh of largely average-height, average-shaped, and occasionally balding Harvard undergraduates, graduate students, and alumni makes up one of the most physically (and spiritually) dangerous crews at the University: the Harvard-Radcliffe Kendo Club.

Founded in its current form in the early 1990s, the club exists almost entirely outside of the mainstream Harvard community. Its practices are conducted largely in Japanese, and members sometimes smack each other on the head with their swords. Despite the fact that they face off, though, members are quite close to one another.

“It’s kind of like a big family,” the club’s public relations officer, Mary B. Schleicher ’18, tells me. “We have socials where we all just get together and watch movies and eat snacks.”

But this camaraderie need not be mistaken for mercy: Harvard’s kendo fighters are not messing around. Their head coach (“sensei”) flies in from Japan to instruct them. They host the biggest kendo tournament in North America (called Shoryuhai), and their practices are hard to differentiate from a battle montage in a “Kill Bill” movie.

Before warm-ups officially begin, the warriors practice their sword strikes in the mirror, screaming with every swing of the shinai. Then the majority of the team lines up to face the two captains for a series of stretching-based, vocal warm-up rituals—picture a lesson of Shaun T’s “Insanity” conducted in Japanese. I half-expect one of them to say that his name is Inigo Montoya and inform me that I should prepare to die.

After stretching, introductions, and drills, the striking begins. This is when the Kendo Club’s practices transform from what seem like innocent expressions of body, mind, and spirit—filled with meditation (“mokuso”), joviality, and togetherness—into what looks like all-out battle.

Swords connect with heads. Screams connect with eardrums. I connect with the corner of the room. After trying to get the hang of swinging the shinai, my neuroses tell me I’d be better off sitting around and watching. But as vicious as kendo fights appear to be, many of the team’s members insist the sport is safe. “Nobody has gotten hurt actually fighting,” Schleicher assures me, before eventually conceding that “some people just hit like a truck, and you can’t avoid it.”

As the practice goes on, however, it becomes clear to me why the club’s members are so secure in their personal safety: They really care about one another. You see it in the way they help each other out with form, the way they instruct beginners, the way they smile when you ask what it was like the first time they picked up their shinais. 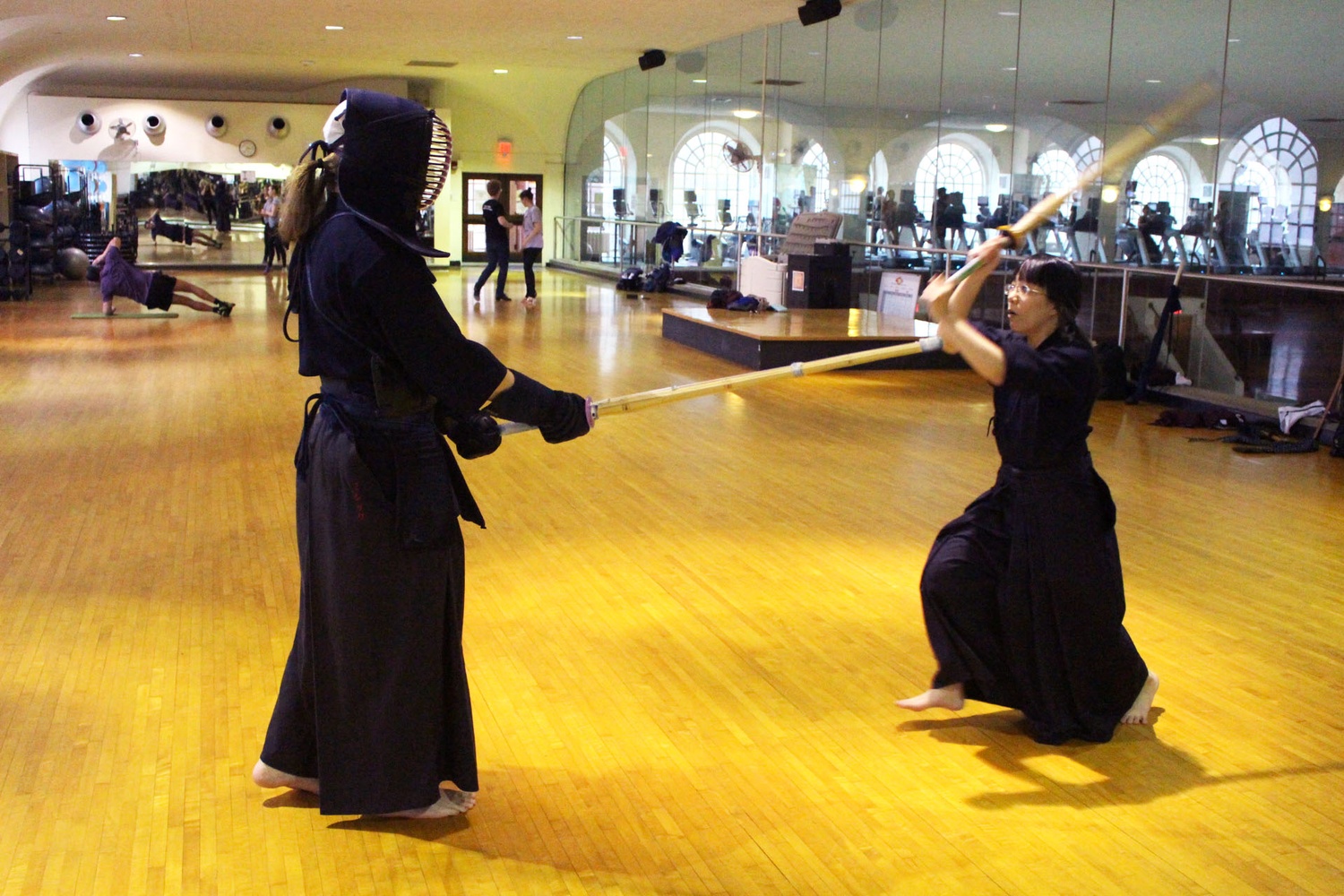 Members of Harvard’s Kendo Club gathered on Tuesday to show off their unique sport. On the appeal of Kendo as an activity and an art form, Mary Beth Schleicher, ‘18, offered her own perspective: "Kendo is more than just a sport. It's also about learning to look at things in a new way.” By Marinda R. Horan

“The biggest thing kendo has given me is a space where I can be physically active and engage with other people,” the club’s vice president, Courtney C. Okwara ’18, says. “If I’m feeling stressed and have a p-set due, sometimes I just want to go to kendo.”

I don’t blame her. After all, while some of us here at Harvard treat friendship as networking and going to the gym as a path towards a “sweet bod, bro,” Harvard’s kendo fighters are not strictly focused on getting ahead or getting in shape. “Even not being in the best of physical states,” Schleicher notes, “I could still come in, practice with people, and feel like I’d accomplished something at the end of the day.”

Unlike other sports team practices, which often conclude with scrimmages and water breaks, last Thursday’s kendo practice ends with a birthday celebration. But rather than giving out gifts, the Harvard-Radcliffe Kendo Club blows out the proverbial candles by throwing a funeral. That’s right, the girl celebrating her birthday is told to make her way through the gym fighting one member of the club after another, fending off the team’s current co-captains, veterans, and one of the club’s founding members: a 53-year-old man who was introduced simply as “grandpappy.”

But the birthday girl's tireless efforts prove unsuccessful as she falls to the ground—proclaimed dead by her teammates.