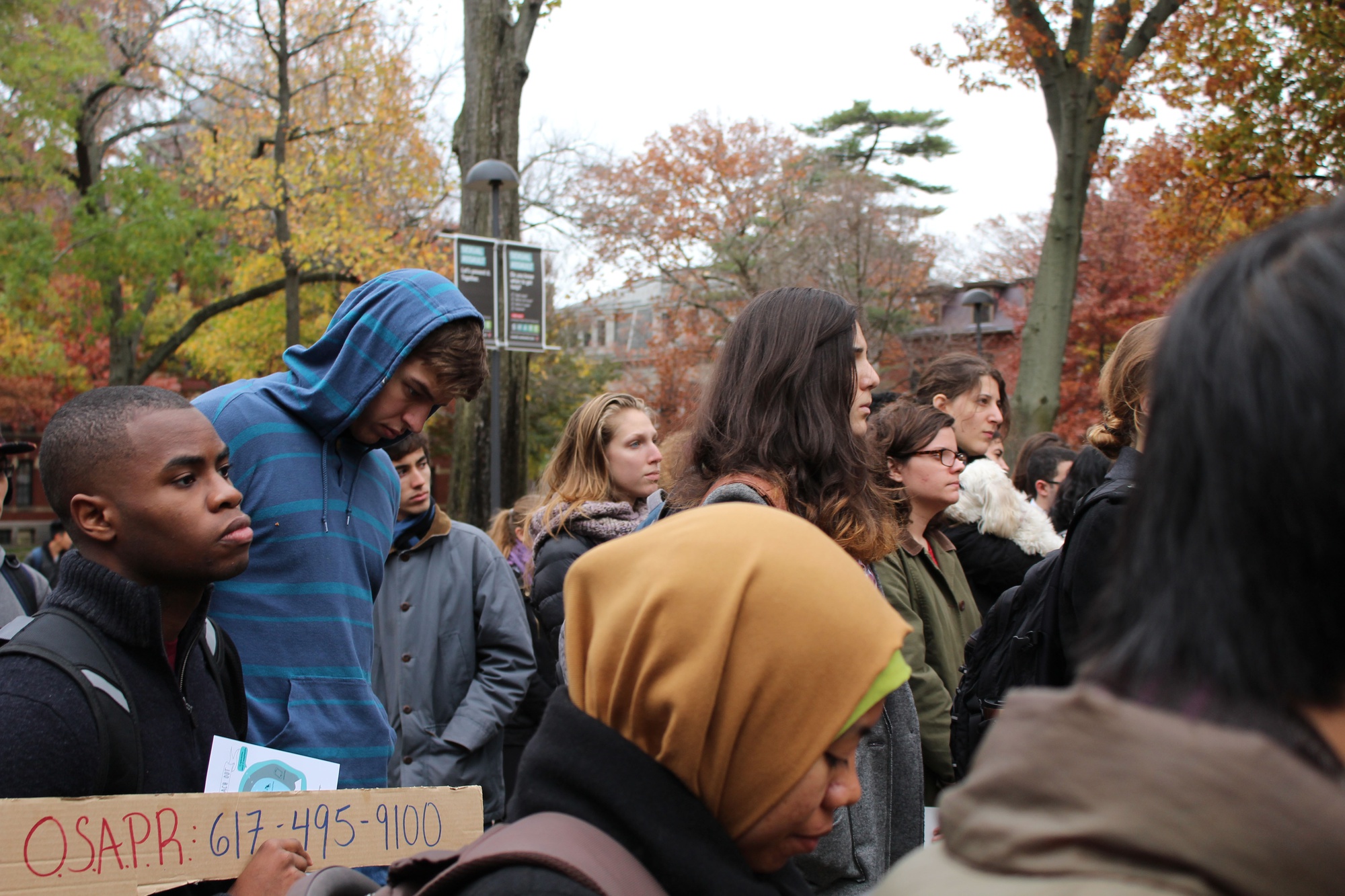 The crowd looks silently on as speakers share stories at a rally against sexual assault outside Massachusetts Hall on Thursday. By Sidni M. Frederick
By Andrew M. Duehren, Crimson Staff Writer

Harvard’s central office for investigating cases of sexual harassment has heard 34 cases since it opened in September 2014 and started a pipeline program to hire more investigators amid increased demand.

Halfway through its second full year of operation, the Office for Sexual and Gender-Based Dispute Resolution, which investigates complaints of sexual harassment at every Harvard school except the Law School, has closed 21—or roughly two-thirds—of those cases, according to Mia Karvonides, the University’s Title IX Officer.

Roughly half of the cases have ended with a finding of a policy violation, according to Karvonides.

“When we do a full investigation it’s a pretty close mix in terms of violation and no violations for our outcomes,” Karvonides said last week. 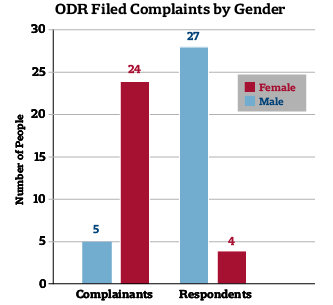 The latest batch of statistics from ODR reflects an increase in the number of formal complaints filed since the office opened. As of October, the office had opened between 25 and 30 cases. Complainants and respondents came from 11 of Harvard’s schools, and four cases included a respondent and complainant from different schools.

“We are continuing to see a greater number, an enormous increase in people coming forward disclosing,” Karvonides said.

She added that roughly half the workload of the Title IX Office and ODR—which ranges from conducting investigations, responding to disclosures, and coordinating prevention and education efforts—involves students and half involves faculty, staff, and other University affiliates. To handle the increasing workload, Karvonides said she hopes to expand ODR’s staff. For months after it opened, ODR remained understaffed, and though it now boasts three full-time investigators, Karvonides said she hopes to begin “a pipeline program” to hire fellows who would eventually become investigators.

Karvonides said she has already hired a fellow who may eventually transition into an investigator role at ODR, and hopes to hire a second fellow in the near future.

“What we’re basically doing is developing a pipeline program because one of the real priorities for me is to increase diversity in my office,” Karvonides said. “There’s so few people out there—I mean we did a national search using a search firm to find investigators, and there were so few people that had the qualifications and the competencies that we were looking for that what we have shifted to is a pipeline approach.”

ODR’s larger caseload comes as attention to sexual harassment and assault at Harvard surges. Last fall, a University-wide sexual conduct survey revealed that 31 percent of senior women at the College had experienced some kind of sexual misconduct during their time as undergraduates, results some administrators described as “troubling.”

The survey also revealed that a majority of Harvard undergraduates did not trust Harvard and were not knowledgeable about how the University responds to and investigates sexual harassment.

In the aftermath of the survey, students held a rally and petitioned administrators.

Last week, a recent graduate filed a lawsuit arguing that Harvard violated anti-sex discrimination law Title IX and failed to properly respond to her sexual harassment case when she was student living in Cabot House. The suit, filed in Massachusetts District Court, charts a complaint Alyssa R. Leader ’15 said she filed with ODR after a male College student purportedly sexually abused and intimidated her.

The College, meanwhile, remains the subject of a federal investigation into its Title IX compliance.