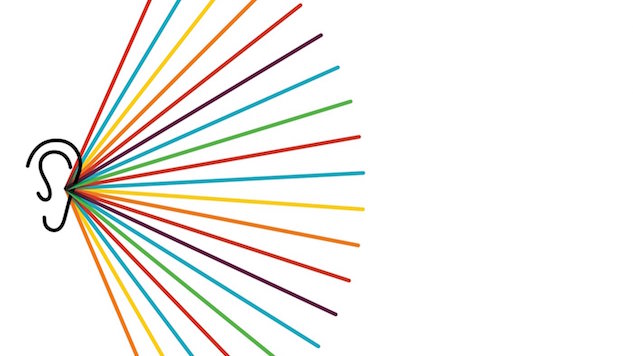 A graphic from Ben Ratliff's new novel, "Every Song Ever: 20 Ways to Listen in an Age of Musical Plenty." By Wikimedia Commons
Advertisement
Advertisement

Listen Up: Q&A with Ben Ratliff

FM had the chance to chat with the long time pop and jazz critic.
By Kelsey S. O'Connor

Every morning I nearly get run over, or almost don’t hear a friend greet me, or semi-crash into someone because Spotify is blasting in my ears during my walk to class. It’s usually the same few songs (recently it’s been “Hold My Hand” by Jess Glynne or “Choctaw County Affair” by Carrie Underwood). There are thousands of songs available, but for the most part we listen to the same 100 or so songs on that playlist we edit every once in a while (mine is creatively titled “Winter/Spring”).

It’s a weird thing to describe sound, but Ben T. Ratliff of The New York Times has mastered it. The long time pop and jazz critic has written a book called “Every Song Ever: 20 Ways to Listen in an Age of Musical Plenty.” FM had the chance to sit down with him at the Harvard Bookstore on Feb. 16.

Ben Ratliff: I mean, [I didn’t have] a musical family, really, but a family that appreciated music. And I grew up mostly an hour north of New York City… I just came to it through radio and records, really. There wasn't that much musical culture around us where we lived. What I realized when I was about 14 was that I could take a bus into the city and see punk matinee concerts at CBGB’s and be home like, relatively early, and that was the first glimpse probably that I had repeatedly of a musical culture…. College radio was a big thing for me as a teenager and then… being part of a college radio station was really, really important because I was able to do what everybody does, I think, which is you start with what you know and then you work your way backwards to figure out how we came to that point. And I had the big library of records to do that with and I think that’s kind of what all of us have now. That's the amazing thing.

FM: Was there a moment when you thought, ‘Wow this is something that I really like, but I could also do this as a career?’

BR: It was pretty instinctive…. I studied Latin and Greek in college and I really liked to write and I really liked music. It might have been somehow a triangulation of those three things. Sort of like studying, figuring out a language, the mechanics of a language, writing, learning how to describe music. There’s a tradition—this is going to sound really pretentious—but there’s a tradition in Greek literature of describing something, called ekphrasis, e-k-p-h-r-a-s-i-s. It’s a literary device that Homer used where you see the Shield of Achilles or whatever it is and he really goes into deep description of what it looks like and the point is he wants this thing to really rise up in the writing so the essence of it becomes clear. So serious description, and I think I always liked that idea…. I feel like that’s what I’m in this for: to figure out how music works through description and then figure out what else it’s doing.

FM: In terms of discovering music through writing, do you find that challenging? How do you write for the public in that way?

BR: It’s weird because it’s translating one thing into another. Writing about sound… you're using words to do it. In a way it doesn't make sense, and also there are people who might think, “Why do I need to read? It’s there, I can just press play.” But I don’t really know how to answer that question. I just feel instinctively that there’s a lot of different ways in. Music is really powerful and popular and we all love it. You know the average person spends four hours a day listening to music.... Something amazing like that. So, I guess I just trust that people are going to want to have many different ways to get in there, whatever it takes. If you can accomplish it just by listening, that’s great, but a lot of people like reading about culture, like having ideas to bounce their own off of, and I guess that’s what I’m providing. The thing about like “good” or “bad,” you know, spend your money on it or don’t. I feel less concerned with that. I want to give people a heads up if something is really great or really terrible for sure. I don’t know. But, yeah, it’s not just consumer service. It’s other things; it’s illumination.

FM: So, you do think there’s such a thing as bad music? In the introduction of your book, you talk about Bach versus Beyonce and how, at least to me, it seemed you were saying that music is all very different but can all be equally good.

BR: Well, I would have to think really hard to think about any music that doesn't potentially have great meaning and that also isn't the result of a whole lot of interesting cultural forces that produced it. Even music that might sound really insipid or silly or whatever. I don’t like everything and I don't think people should like everything. But what's important for me is that people understand the enormity of what they have available to them right now, and that they can find ways to make connections between pieces of music that might not seem to have anything to do with each other. Because the more people can feel like “ok I like this, but that over there is foreign and just doesn’t have anything to do with me.” Well the closer you look at that thing over there it might have something to do with something you know and you start making those connections and then all of a sudden you have a whole lot of, you have new agency. You can claim that thing that thing is about you too. And I just feel like this is, it might be good to develop that ability now before the streaming services really successfully and effectively tell us “now, we know who you are. We really know who you are and we know what kind of music you like. So just don't think about anything else just leave it entirely to us.”

FM: So it’s almost a measure to avoid being overtaken by technology?

BR: Yeah, I mean. I just don’t want it to be, it feels wrong that all that power should be given to algorithms or forces that are there, in a sense are there to reduce you to sell to you better. It makes perfect business sense, but listening is really important. It’s part of how you figure out who you are and how you define your relationship to the world and how you learn emotionally and in every other way. And you can’t, you can’t leave that to an unseen force especially one that isn't necessarily even human.

FM: So in a sense a lot of the listening experience is lost when you give that power to a computer?

BR: It’s not that...on a song by song basis we’re all fine and.. but it’s the power to connect that can be really individually creative. The power to reach out and connect to another, some other tradition that you don't know much about and figure out what the connection is between what you already know and that.