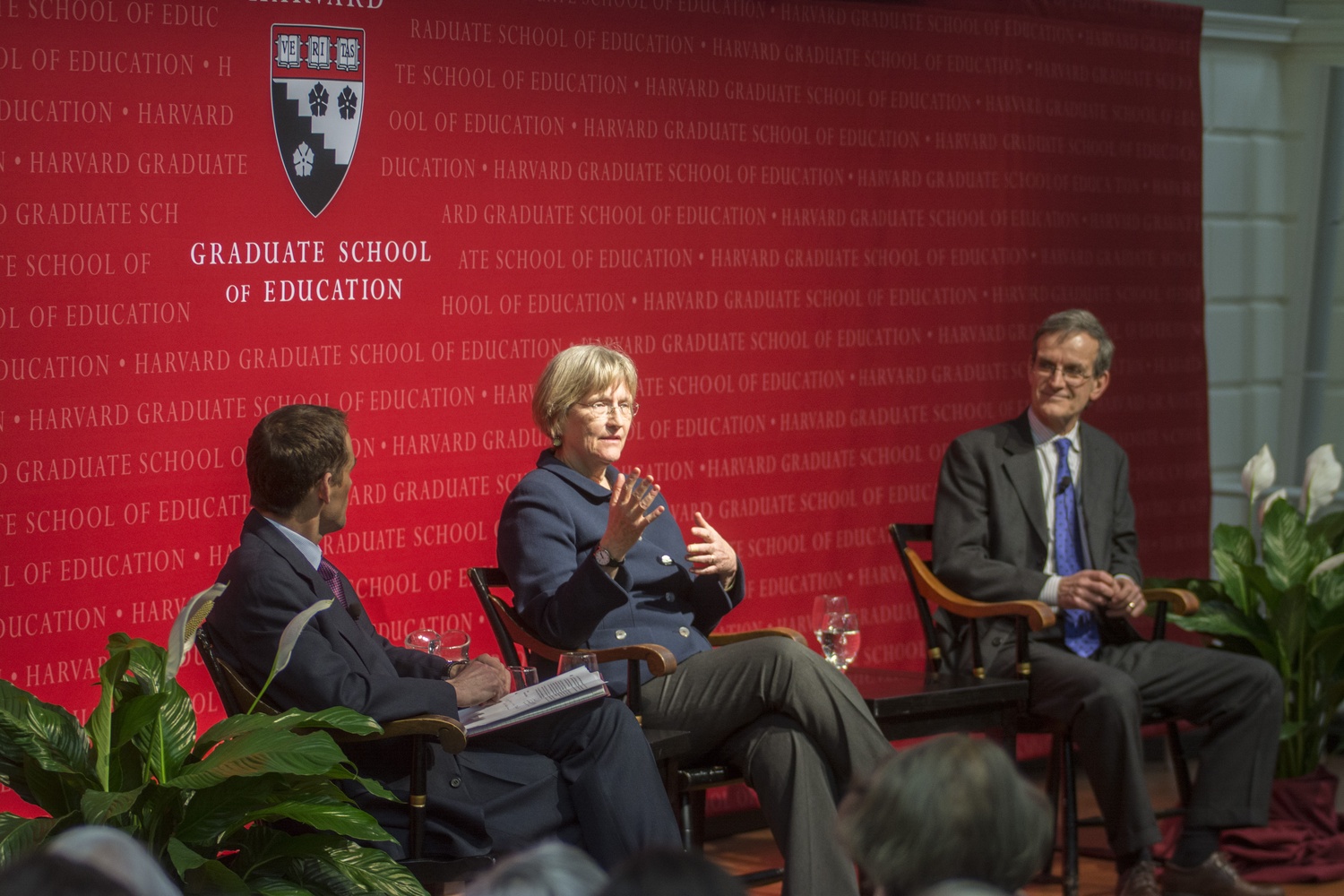 In a sprawling and frequently introspective conversation, University President Drew G. Faust and her younger brother Donald Gilpin espoused the virtues of a liberal arts education and reflected on their time growing up together at an Askwith Forum Monday.

The forum, moderated by James E. Ryan, Dean of the Harvard Graduate School of Education, covered topics ranging from the siblings’ upbringing in rural Virginia to the role of the arts and humanities in education.

Ryan opened the forum by asking the siblings to introduce one another, provoking Gilpin—a retired high school English and drama teacher—to launch into what he jokingly called a “psychobiography” of his older sister. As the only daughter in a family of four children, Faust “had to learn the hard way how to deal with difficult males,” Gilpin said.

“Goodness,” Faust said quietly as Gilpin lavished praise on her.

Gilpin added that a number of “powerful, principled, strong women” in Faust’s life, including their mother and accomplished women professors at Bryn Mawr College, Faust’s alma mater, helped shape her into the person she is today.

On the other hand, Faust said her brother’s experiences taking time off during his undergraduate career at Princeton to teach in Labrador, Canada, fueled his interest in teaching, a profession in which he worked 41 years before retiring. In addition to his work ethic, Faust said she thought two other qualities of Gilpin particularly stood out.

“There were two parts of what made him a great teacher: He loved the kids, and he loved what he was teaching to the kids,” Faust said.

Asked what advice she would give to the current crop of presidential candidates, Faust criticized former Republican contender Marco Rubio’s debate comment that the country would benefit from training more blue collar workers and fewer “philosophers.”

Both Faust and Gilpin also championed the arts at length, with Faust praising the University’s recently-debuted Theater, Dance, and Media concentration. Faust said she will defend the value of the humanities at the United States Military Academy at West Point on Thursday.

In the question and answer portion of the forum, Abigail Weil, a Ph.D. candidate and leader in the Graduate School of Arts and Sciences unionization movement, asked Faust whether she believed graduate students should be permitted to collectively bargain. Faust, reiterating her public stance against the campaign, said she disapproves of unionization efforts that would warp the relationship between graduate students and faculty, but acknowledged “the students have the right to try to organize, to have an election.”

Weil said she was encouraged by Faust’s response, which she saw as somewhat more conciliatory compared to Faust’s past criticisms of the unionization movement.

“We are pushing on the administration to pledge neutrality, so even though President Faust repeated her own anti-union views, she did end her response by saying that if we want to organize and form a unit, we’re free to do so,” Weil said after the event. “We hope that we can turn that into an official pledge of neutrality from the administration.”

Ending the forum on a nostalgic note, Gilpin explained what he thought every teacher should understand before entering the profession.