The Crimson and Eagles square off Friday night at the DCU Center in Worcester, Mass. (8 p.m.) 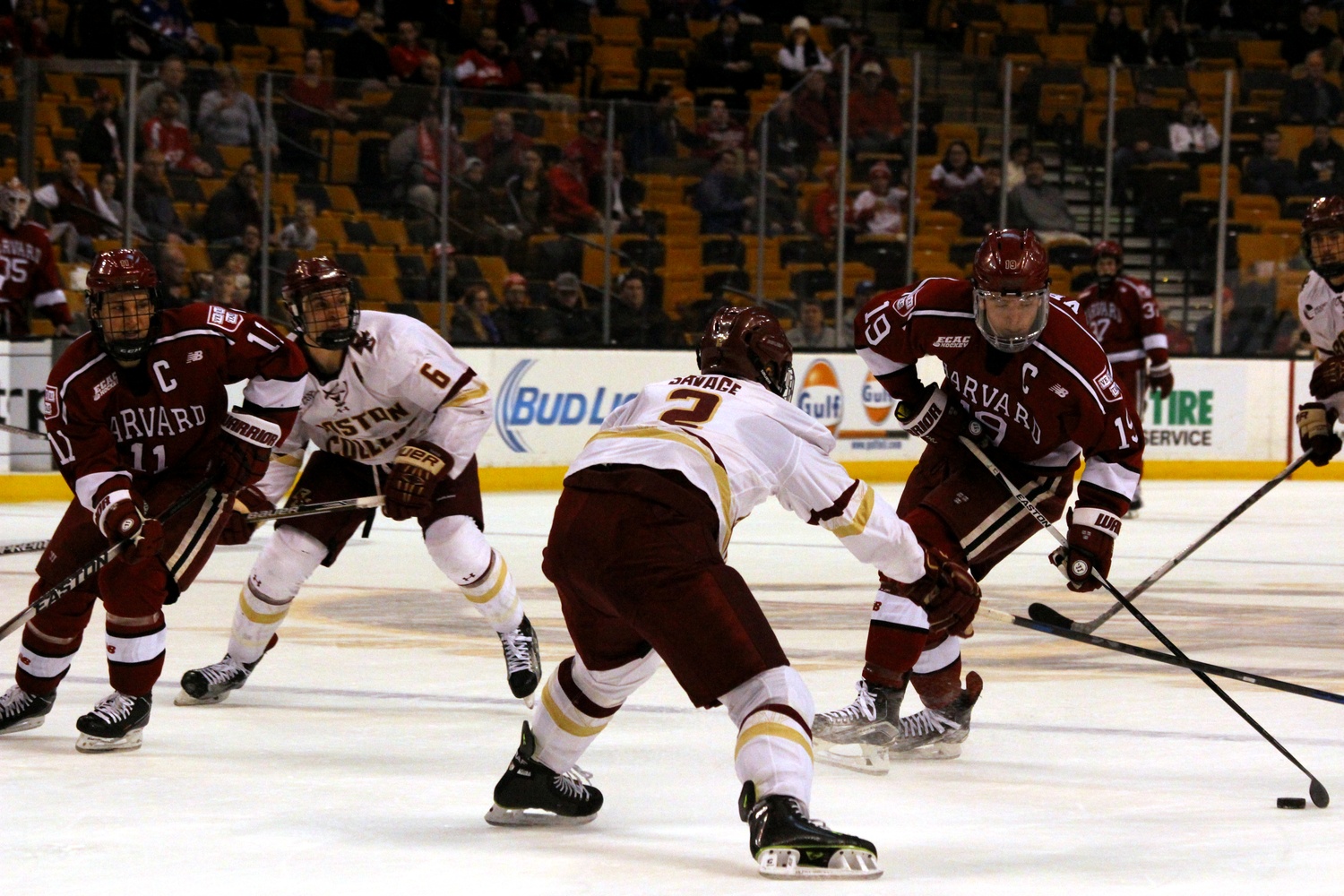 Co-captains Jimmy Vesey (19) and Kyle Criscuolo (11), shown in action against BC during this year's Beanpot, will look to notch their first career NCAA tournament win Friday night against the Eagles. By Thomas W. Franck
By Michael D. Ledecky, Crimson Staff Writer

For Sean Malone, the biggest lesson from his first NCAA tournament did not come during his team’s first-round loss to Nebraska-Omaha. It came after.

“Definitely the feeling in the locker room afterwards was the most important,” the junior forward said Wednesday. “You don’t want to have that feeling that your season is over, and I think that the majority of our guys in our locker room felt that last year.”

A year ago, a cloud of uncertainty hung over the Harvard men’s hockey team following its defeat in South Bend, Ind. The Crimson figured to lose its starting goaltender and top defensemen to graduation or eligibility constraints, and Jimmy Vesey fought back tears in his postgame presser before a media corps convinced that the Hobey Baker finalist had played his last game as an amateur.

Yet Vesey returned, and new stars emerged. A year later, No. 10/9 Harvard (19-10-4, 12-6-4 ECAC) finds itself back in the single-elimination national tournament, this time in a more familiar position against a more familiar foe.

The Crimson’s Friday night date with No. 6/5 Boston College at Worcester’s DCU Center will be the programs’ 124th meeting since 1919 but their first in an NCAA tournament. Harvard trails the all-time series, 45-73-5. The 73rd loss came in a 3-2 defeat in the Beanpot opener last February.

After falling short in their respective conference tournaments, both teams enter the 16-team bracket with something to prove.

Last Saturday in Lake Placid, a frustrated Malone watched from the stands as top-ranked Quinnipiac scored three power-play goals to push past Harvard for the ECAC title. After a three-goal performance in the Crimson’s quarterfinal sweep of RPI, cramps sidelined the Buffalo Sabres pick late in Harvard’s semifinal win over St. Lawrence and kept him out of the conference final.

Malone declined to discuss his injury but fully expects to be ready for Worcester, where he will likely rejoin senior Colin Blackwell and junior Luke Esposito on the Crimson’s second line.

“I think we definitely complement each other very well as a line,” Malone said. “We’ll see what the lines are for Friday, but I like playing with those guys for sure.”

Although Harvard ranks among the five least-penalized teams in the NCAA, coach Ted Donato ’91 has made discipline a point of emphasis this week. Eleven penalty minutes, including a five-minute boarding major to Esposito, helped sink the Crimson in Lake Placid. Untimely penalties also played key roles in the team’s most recent NCAA and Beanpot eliminations.

“Hopefully the Quinnipiac game was a little bit of an eye-opener for us in the sense that in one game, you’ve really got to handle your emotions, and you’ve got to stay out of the box, and you’ve got to not let the game get away from you,” Donato said.

Nevertheless, BC has history on its side.

The Eagles, who opened as the preseason national favorite, have won the last five regionals hosted in Worcester in each even-numbered year since 2006.

En route to collecting its 20th Beanpot title, BC’s defense proved stingy against Harvard, holding the Crimson to 23 shots on goal and six in the third period.

Eagles coach Jerry York, already having collected his 1,000th career win this January, enters the tournament in search of his sixth career NCAA title and fourth in nine seasons.

Perhaps Donato, who earned tournament MVP honors as a player in 1989 but is still in search of his first coaching win on the big stage, put it best on Wednesday:

“You know that you’re in the NCAA tournament if you have a chance to play against Boston College.”

By night’s end, the DCU locker rooms will tell the story.