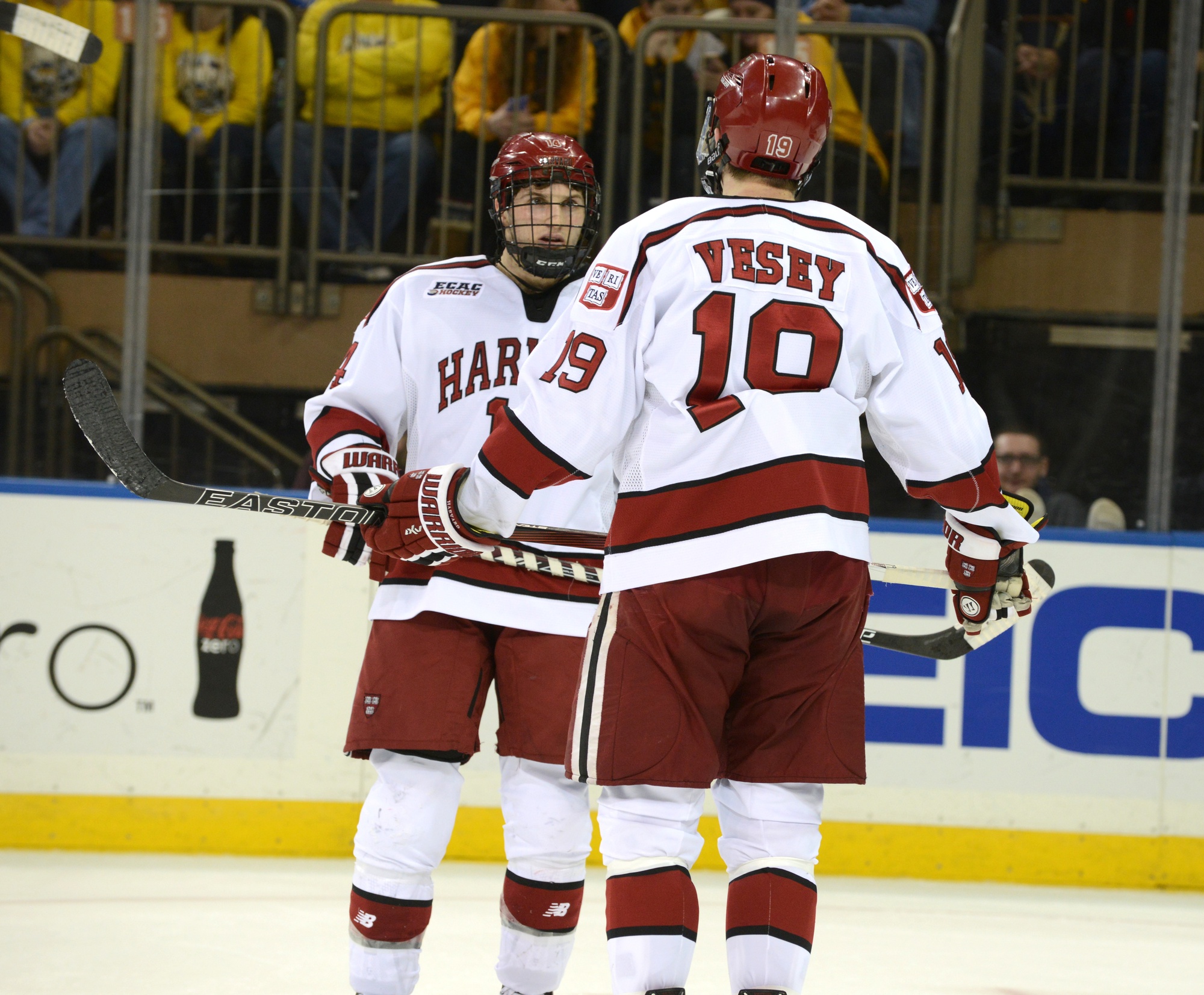 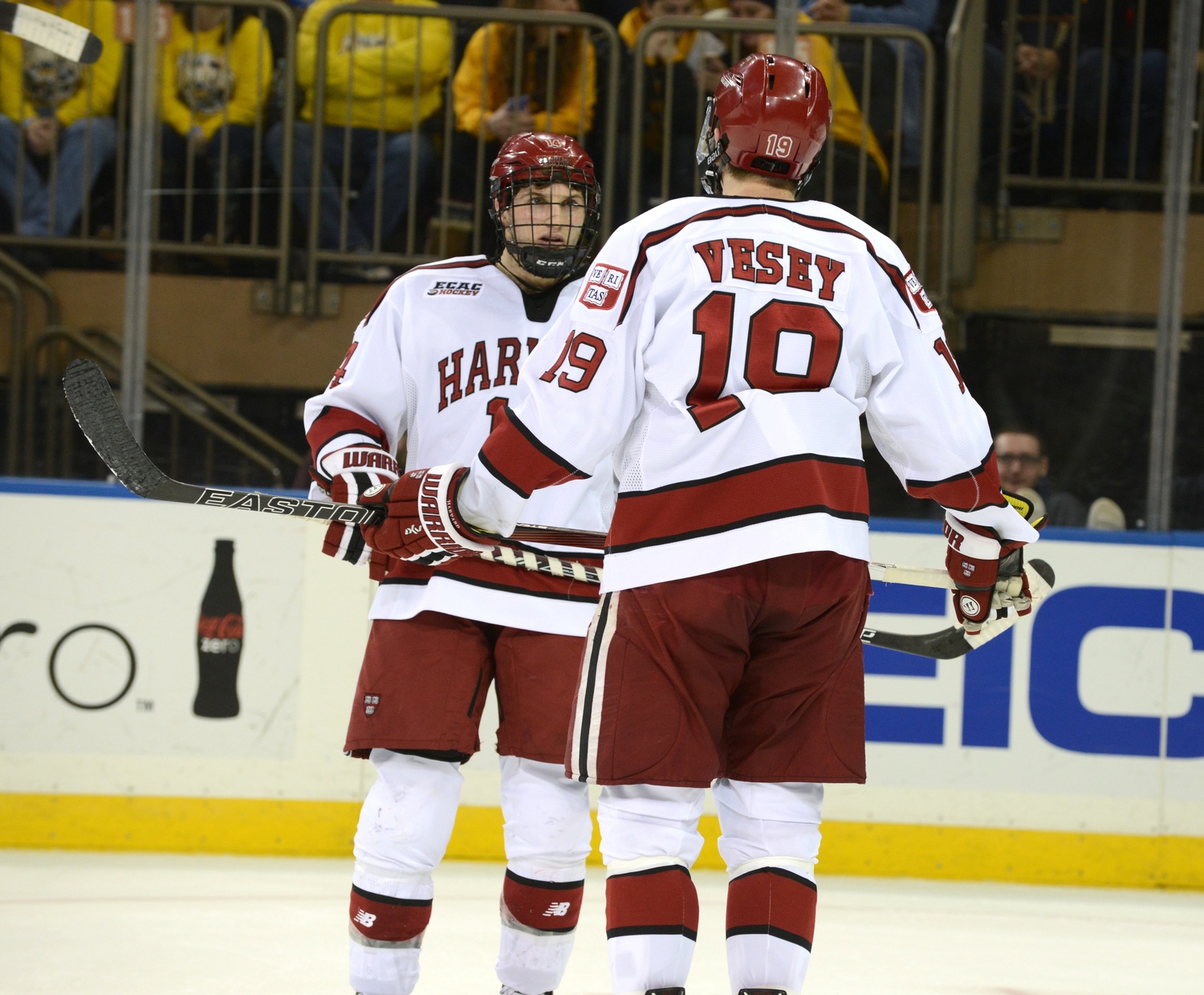 Kerfoot, a New Jersey Devils draft pick, has spent the lion’s share of the last two years centering Harvard’s first line between the Crimson’s outgoing co-captains, Vesey and Kyle Criscuolo. The British Columbia native understands he and Tringale have big shoes to fill.

“They’ve obviously both been great captains,” Kerfoot said Wednesday. “How they’ve conducted themselves on and off the ice and how hard they work and how they treat everyone on the team—it’s something I look up to and something that everyone in our class is going to try and emulate and try to continue next year.”

Kerfoot led Harvard in assists this season (30) and finished second in points (34). Tringale, meanwhile, is a fourth-line grinder. The Medford native tallied a career-high five points over 29 games in 2015-2016, but has distinguished himself for his bruising shifts and vocal leadership.

“I don’t see my role on the team changing too much,” Tringale said. “I’ll try to keep doing the same things—just try to be as positive as possible, try to bring energy and as much hard work and grit as I can.” 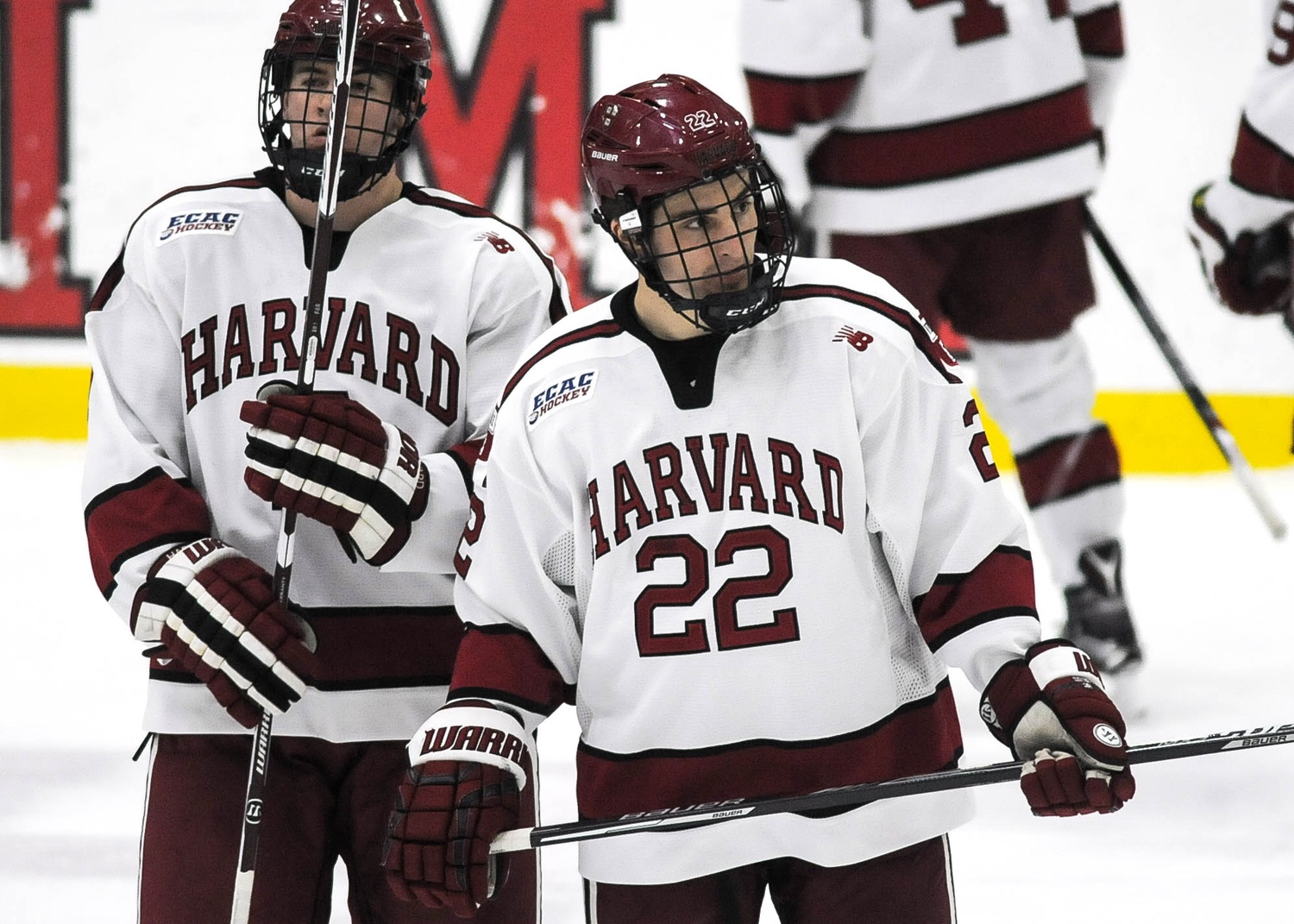 Devin Tringale (22) will captain the Crimson alongside Alexander Kerfoot next season. By Y. Kit Wu

Together, Kerfoot and Tringale are the 126th and 127th captains of Harvard men’s hockey. The co-captains know each other well. They have been roommates in Winthrop House for the last two years.

“We’re obviously really close, and it’s pretty exciting to get to share [the captaincy] with him,” Kerfoot said. “I think that we have a good relationship, and we both bring different things to the table. It’ll be a good dynamic.”

The 2016-2017 season will be the third consecutive one to feature Crimson co-captains, and the eighth to feature such an arrangement in the program’s 118-year history.

Harvard’s banquet came just over two weeks after the team’s elimination in the first round of the NCAA tournament by way of a 4-1 loss to Boston College in Worcester. On Saturday, ECAC Hockey champion Quinnipiac fell to North Dakota, 5-1, in the national final.

Despite the loss of Vesey and Criscuolo, Kerfoot and Tringale refuse to lower their sights for next year.

“We had a pretty successful season this year, but we have very high expectations going into next year too,” Tringale said. “We think we can be even better next year, and we look forward to giving Harvard hockey fans even more to cheer about next year.”

There were no surprises among the four individual awards announced by the team on Monday.

For the fourth time in four years, Criscuolo received the Ralph “Cooney” Weiland Award for devotion to the game. Since signing his first pro contract in late March, the two-time ECAC Hockey Student-Athlete of the Year has already played three games with the Grand Rapids Griffins, the American Hockey League affiliate of the Detroit Red Wings, following Harvard’s first round exit in the NCAA tournament.

Vesey, three days after receiving national player of the year honors in Tampa, Fla., was recognized with his third straight John Tudor Memorial Cup as the team’s top player.

Since the Charlestown native announced his intent to exercise his NHL free agent option, the rumor mill has continued to spin with regard to the MVP’s professional destination, consuming other Harvard personnel in the process. On Tuesday, Harvard coach Ted Donato ’91 gained traction on social media as a potential candidate to replace Claude Julien behind the Boston Bruins bench. So far, the rumors appear to be unfounded, as Bruins management has yet to dismiss Julien from his post.

Harvard used Monday not only to look back but also to look forward. The team’s other two awards on Monday went to underclassmen.

Sophomore goaltender Merrick Madsen received the Donald Angier Hockey Trophy as the team’s most improved player. In his first season as a starter, the Philadelphia Flyers pick won 18 games and posted four shutouts.

Forward Ryan Donato, meanwhile, was recognized as the team’s top rookie with the George Percy Award. Under his father’s direction, the second-round Boston Bruins pick finished the season with 13 goals, two more than Vesey scored in his freshman campaign.