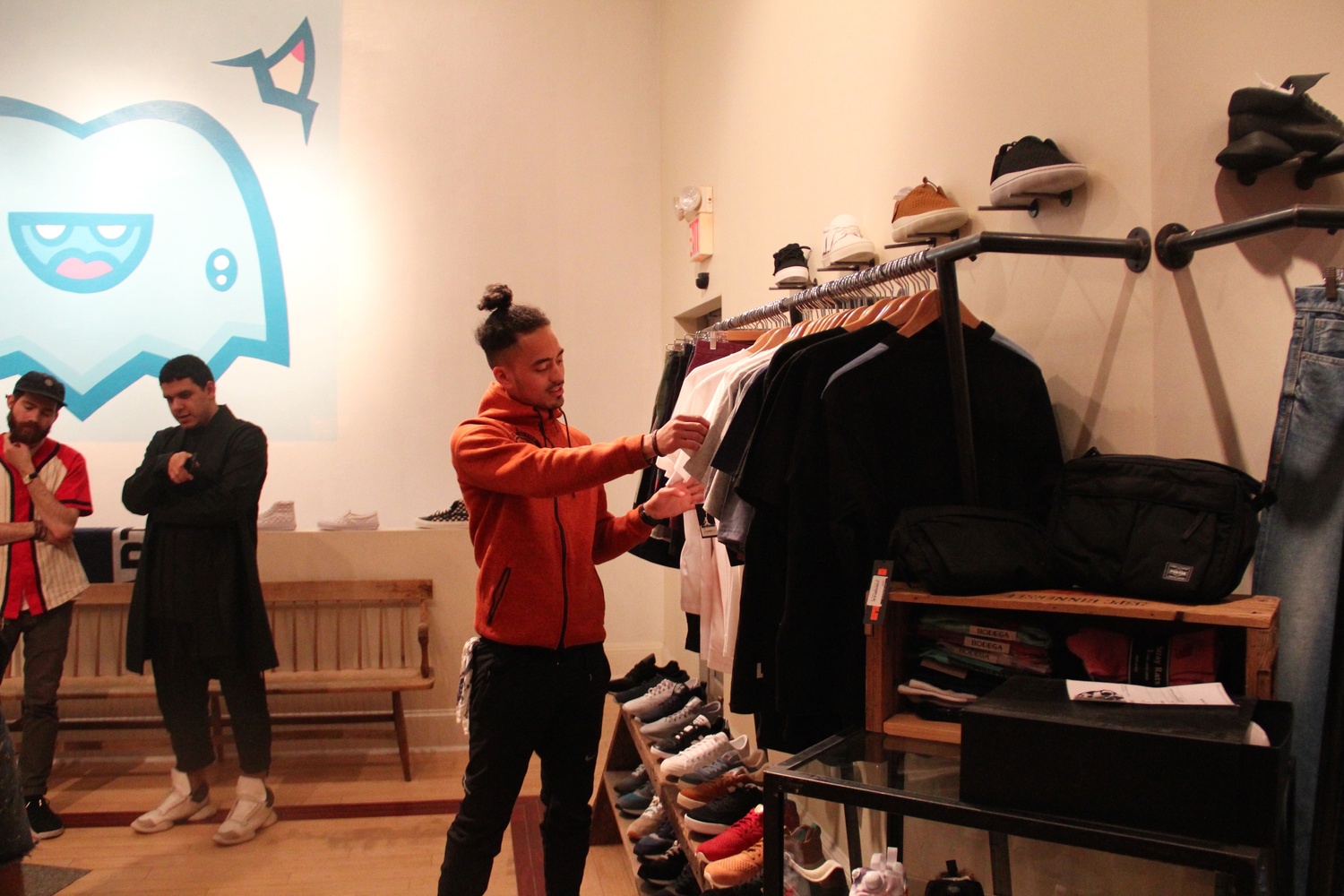 Bodega’s culinary woes are not due to a lack of customers or poor inventory, since Bodega is not, in fact, a functioning bodega. The grocery store is a front for a much cooler operation.
By Sam H. Koppelman

“Every day there’s somebody who walks in with their jaw literally to the floor,” Ashley Graham tells me. Graham is describing the customer experience at “Bodega,” a corner store nestled on a side street in Downtown Boston, whose shelves hold Jarritos sodas, Frosty Flakes, and a sign that reads “God Hates Streetwear.”

As far as traditional general stores go, Bodega is gastronomically underwhelming, with no sandwiches, candy, or even flavored contraception to offer. “I wouldn’t recommend you buy food, ‘cause it’s been there since like 2006,” employee Oscar Aquino laments from behind the cash register. But Bodega’s culinary woes are not due to a lack of customers or poor inventory, since Bodega is not, in fact, a functioning bodega. The grocery store is a front for a much cooler operation. 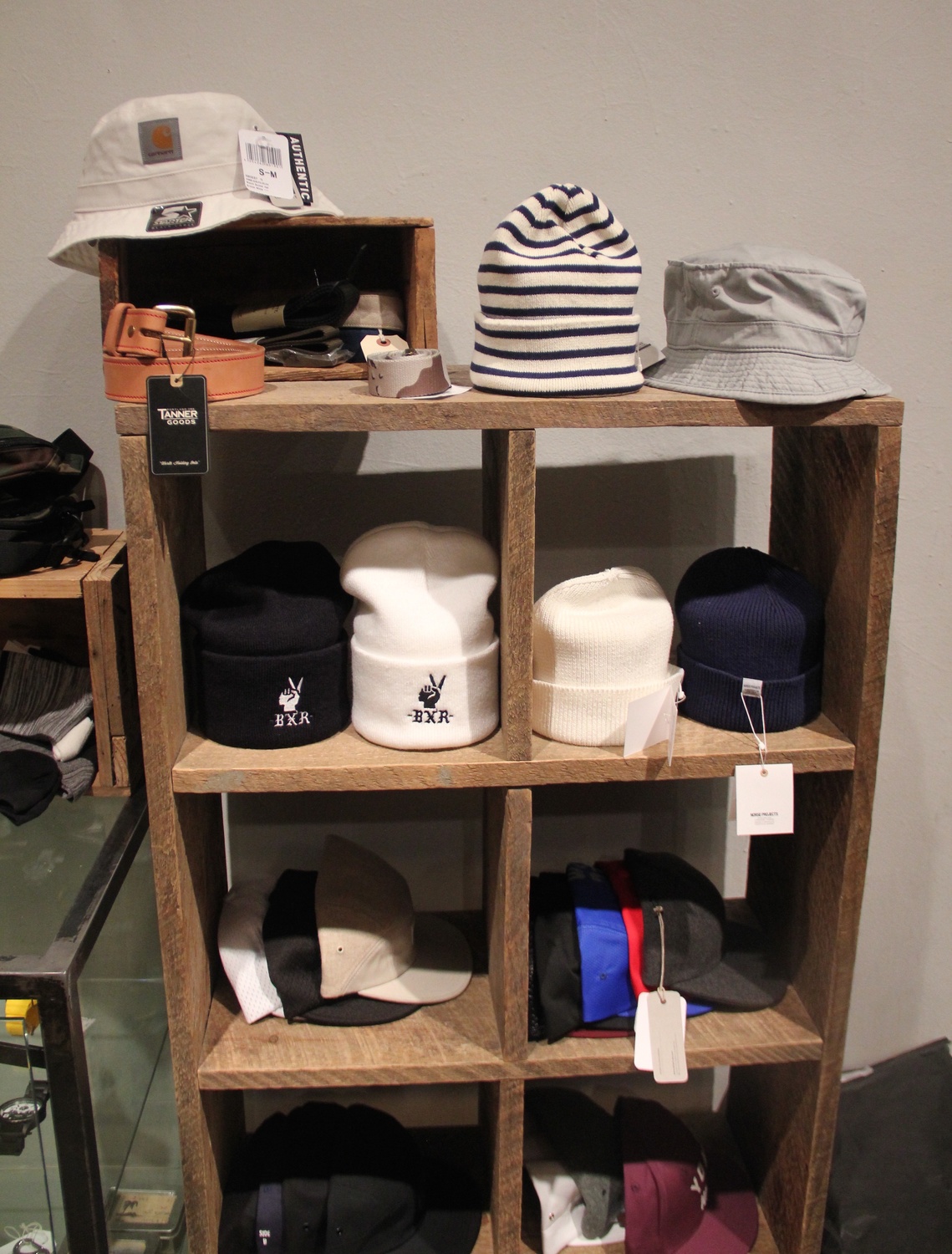 When customers approach the Snapple vending machine towards the back of the store, the wall slides open, and guests are teleported into a radically different environment: a luxury sneaker and streetwear shop. 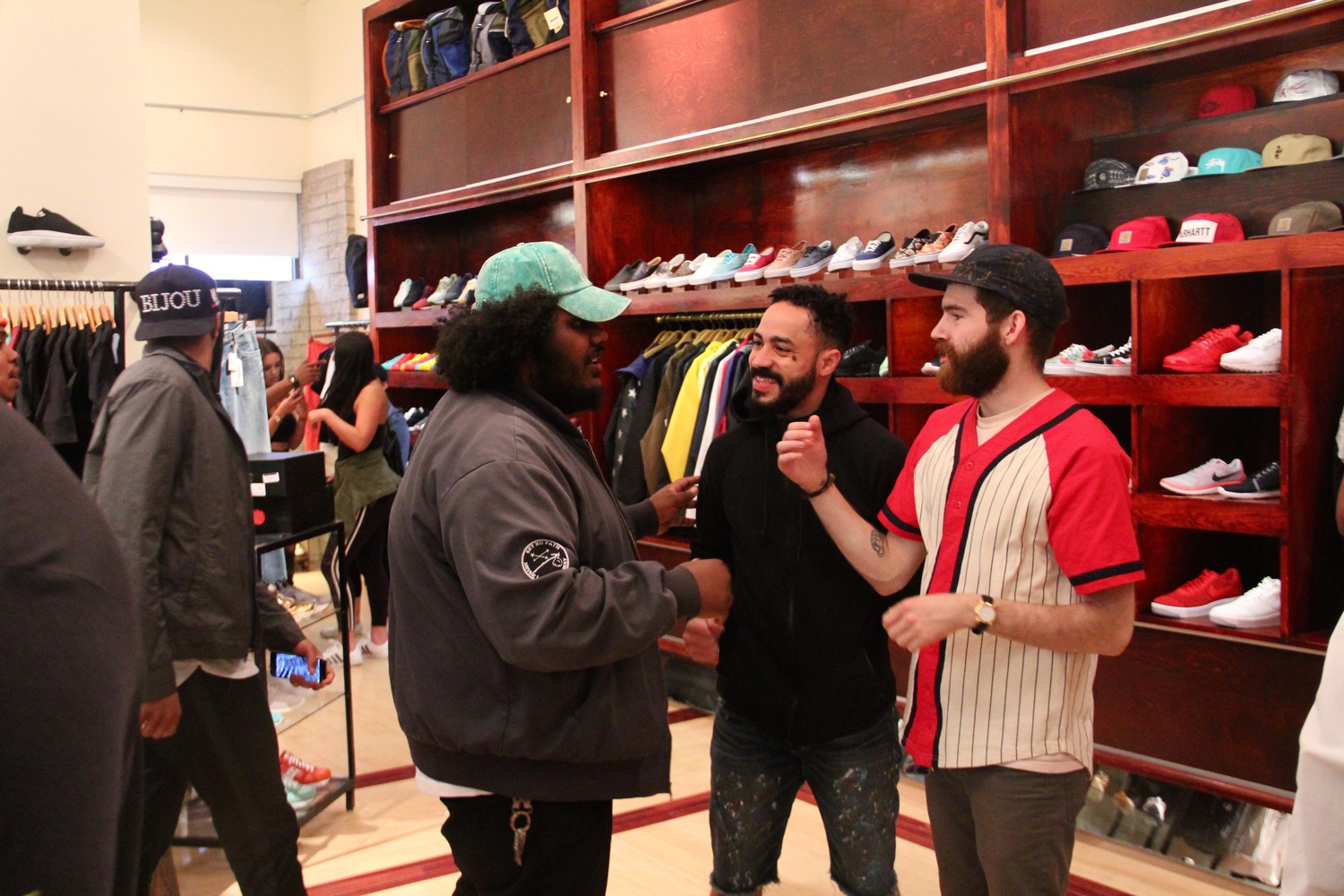 There's always a social event at Bodega, even on a Monday afternoon. By Isabella S. Beroutsos

The walls and drawers are filled with gold shoes, $250 hoodies, $70 plain t-Shirts, and anything else you could imagine a super cool 15-year-old—or a slightly less cool 25-year-old—wearing. Customers eagerly comb through these racks of clothing, equal parts giddy and self-satisfied. The layout of the store is ripe for a Jason Bourne action sequence, but the vibe is more Wes Anderson than Anderson Silva.

Escobar explains that the concept for Bodega comes from similar corner stores in New York City, where “you have to know a password or you have to know somebody in order to get behind [and] gamble or buy illegal car parts and stuff.” As Taylor Swift once said after moving to The Big Apple, “You can get almost anything in a bodega.” Who knew that a sick pair of kicks is on that list? 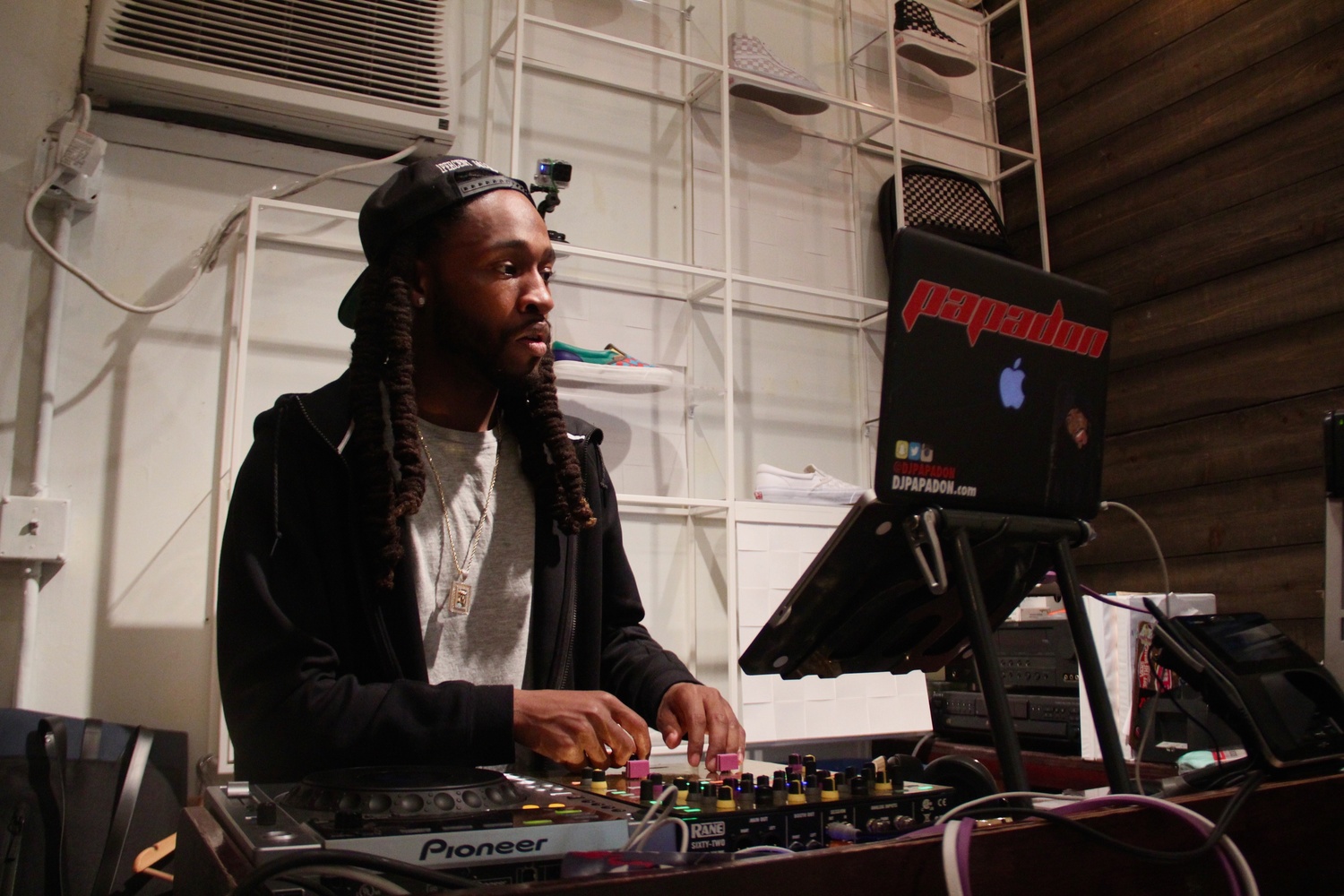 At Bodega, music is a large part of the shopping experience. DJ Papadon controlled the tracks on Monday with a wide mix of music genres. He stood a step up in the back of the store, visible from every corner, in direct eyesight as customers walked in. By Isabella S. Beroutsos

Many guests do not realize Bodega’s true identity until they’ve spent a significant amount of time in the store—a trend that breeds confusion and entertainment. “I remember this one girl came with her boyfriend, and she knew this was Bodega, and he didn’t know,” Aquino says. “So he was just looking around, and she walked right through [the Snapple vending machine], and the door closed. He was like, ‘Where’d my girlfriend go?’ And I’m looking at him like, ‘What you talking about?’ And he was just creeped out.” According to Aquino, the man left the store thinking his girlfriend had disappeared. 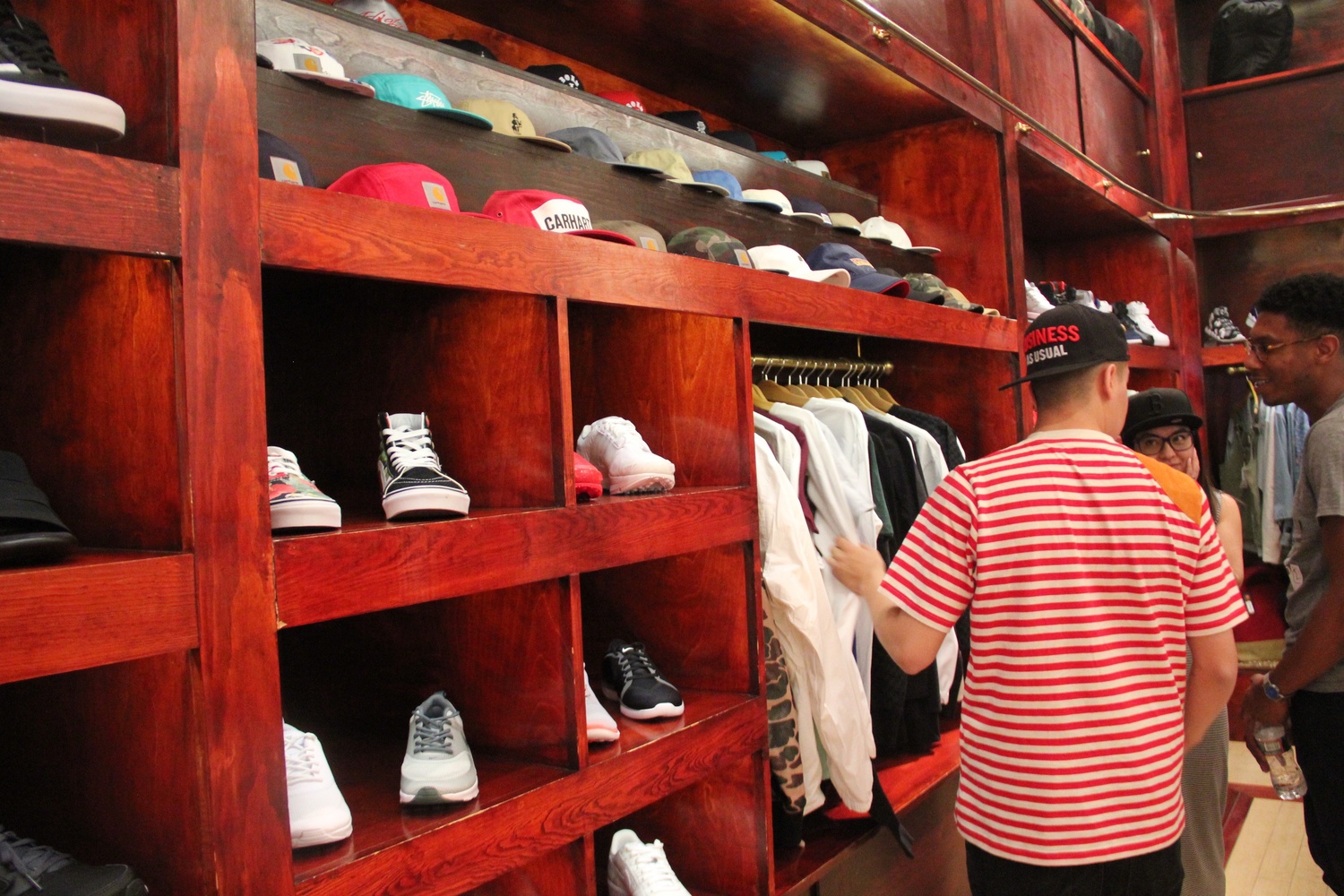 A Bodega salesman talks to customers as he shows them around the store. By Isabella S. Beroutsos

Once you become aware of of Bodega’s identity, though, hints of what makes the store special reveal themselves. There’s the ironic aforementioned “God Hates Streetwear” sign behind the cash register; there are employees DJing as they sit nonchalantly in the front of the store; there’s even a distinct sense of conspiracy amongst everyone in the know. 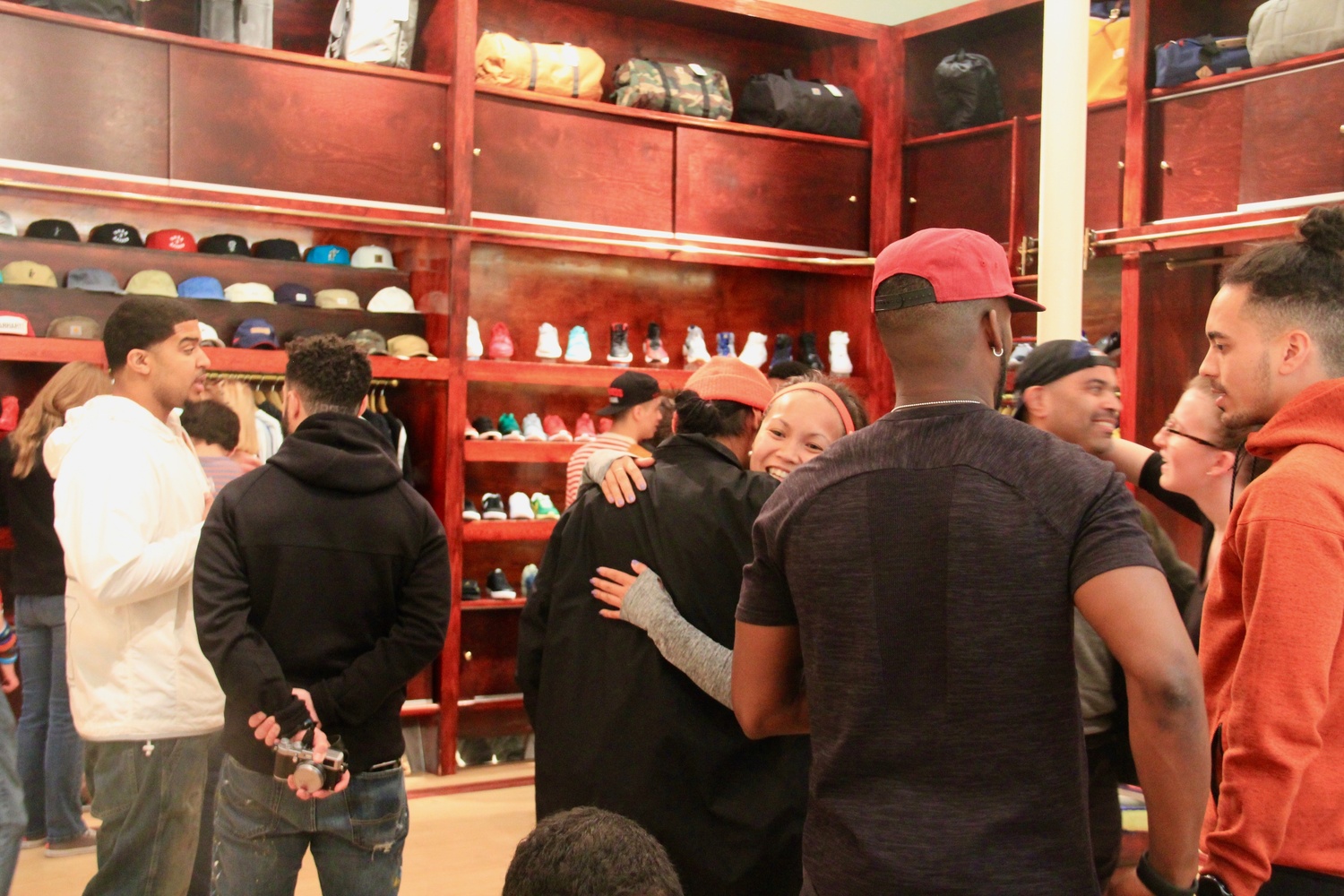 Customers greet each other at Bodega, Boston's store behind a Snapple vending machine. By Isabella S. Beroutsos

“Inside and out, it’s a dope atmosphere,” Aquino says. “There’s no other store like this in the world, so people are very attracted to this place.”

As Escobar puts it, Bodega is cool because it is “hidden in plain sight.”