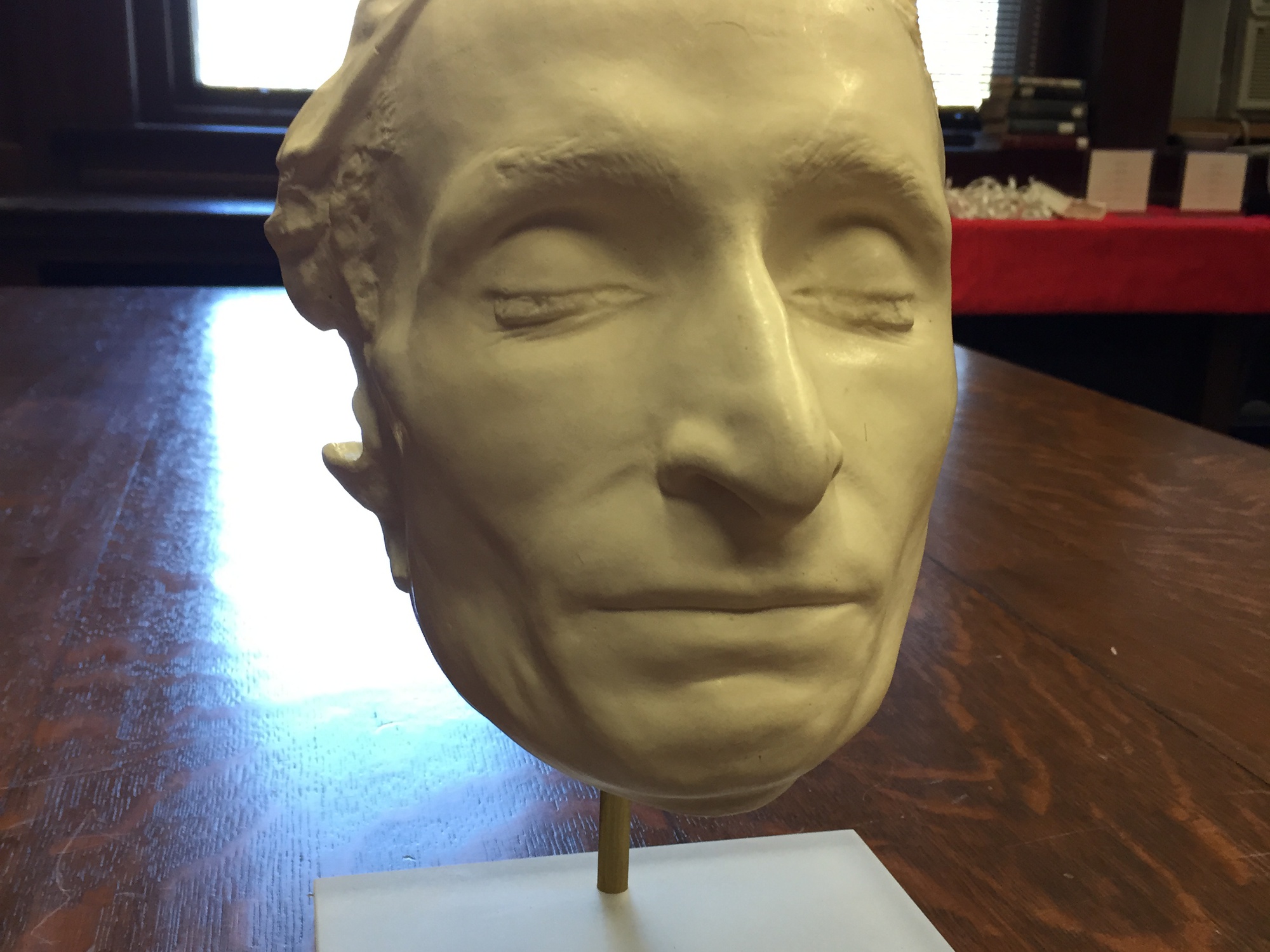 Return of the Mask

Meanwhile, Johnson-DeBaufre kept up the search on his own. A few weeks ago, he reached out to us to deliver breaking news: He had the mask—well, sort of.
By Ana S. Olano

Back in April 2014, Fifteen Minutes covered a mystery of philosophical proportions: Blaise Pascal’s missing death mask. Philosophy professor Sean D. Kelly had planned to feature the artifact, cast at the time of the 17th-century philosopher and mathematician’s death, in his class. After a visit to the archives to retrieve the mask proved unfruitful, Kelly conferred with Eric Johnson-DeBaufre, the department librarian. Both were dismayed to realize that Pascal’s mask—donated to the department by the late philosopher and Harvard professor William James—was missing.

After a few more futile search efforts, Kelly decided to open up the wild goose chase to his students, offering an automatic “A” to anyone who was able to find the mask. Meanwhile, Johnson-DeBaufre kept up the search on his own. A few weeks ago, he reached out to us to deliver breaking news: He had the mask—well, sort of.

“I started thinking shortly after the first Crimson article appeared on the death mask, ‘I wonder if we could get a copy made from the original,’” he tells us. “It’s not the same as having the one William James gave us, but it’d be close.” Johnson-DeBaufre reached out to the Parisian organization that owns the original mask. They weren’t willing to make a copy, he was informed, but they had an extra one that they were happy to send him. “I like to think of this as the sibling of the death mask that William James gave us,” he says. “Made from the same original, just not James’s.”

For all the students who have been holding out for that easy A, the dream is not yet dead. Johnson-DeBaufre believes that although this sister mask serves its purpose, Kelly’s offer should still stand if any student can locate the department’s missing treasure. The mask may crop up yet—after all, the two other items Johnson-DeBaufre had listed as missing were both discovered gathering dust atop a department administrator’s shelf. Oddly enough, one of these items was a silver cup also belonging to William James, given to him by his students after his last lecture at Harvard.

Beyond being used in Professor Kelly’s new course, the mask may soon find a new home in a small exhibit that Johnson-DeBaufre plans to set up on the second floor of Emerson. “The plan eventually,” he says, “is to install three cases along this wall that will tell the story of the department’s history.” He has received approval from the administration and is now looking for funding to acquire the cabinets.

In these displays, Pascal’s death mask would be accompanied by artifacts such as William James’ silver cup, brass scientific instruments from the era when psychological experiments were under the domain of philosophy, and letters from the Philosophy department petitioning to give a female professor at Wellesley College a Ph.D at a time before women were eligible to receive degrees.

The mask’s immediate future, though, is in Kelly’s course. Johnson-DeBaufre described the purpose of the mask as a memento mori—a somber reminder of our own mortality. “Contemporary philosophers are making a return to some of the big questions, like death, as a kind of imaginative retrospective standpoint.” he says. “[It] might reveal aspects of what it means to live a good life that might otherwise be concealed for us.”

In a follow-up email, Johnson-DeBaufre shared a quote from Michel de Montaigne that encapsulates this idea: "Let us rid [death] of its strangeness, come to know it, get used to it. Let us have nothing on our minds as often as death. At every moment let us picture it in our imagination in all its aspects… He who has learned how to die has unlearned how to be a slave."

Whether haunting Harvard’s archives or its classrooms, Pascal’s mask—in all its versions—seems ready to teach us these lessons.