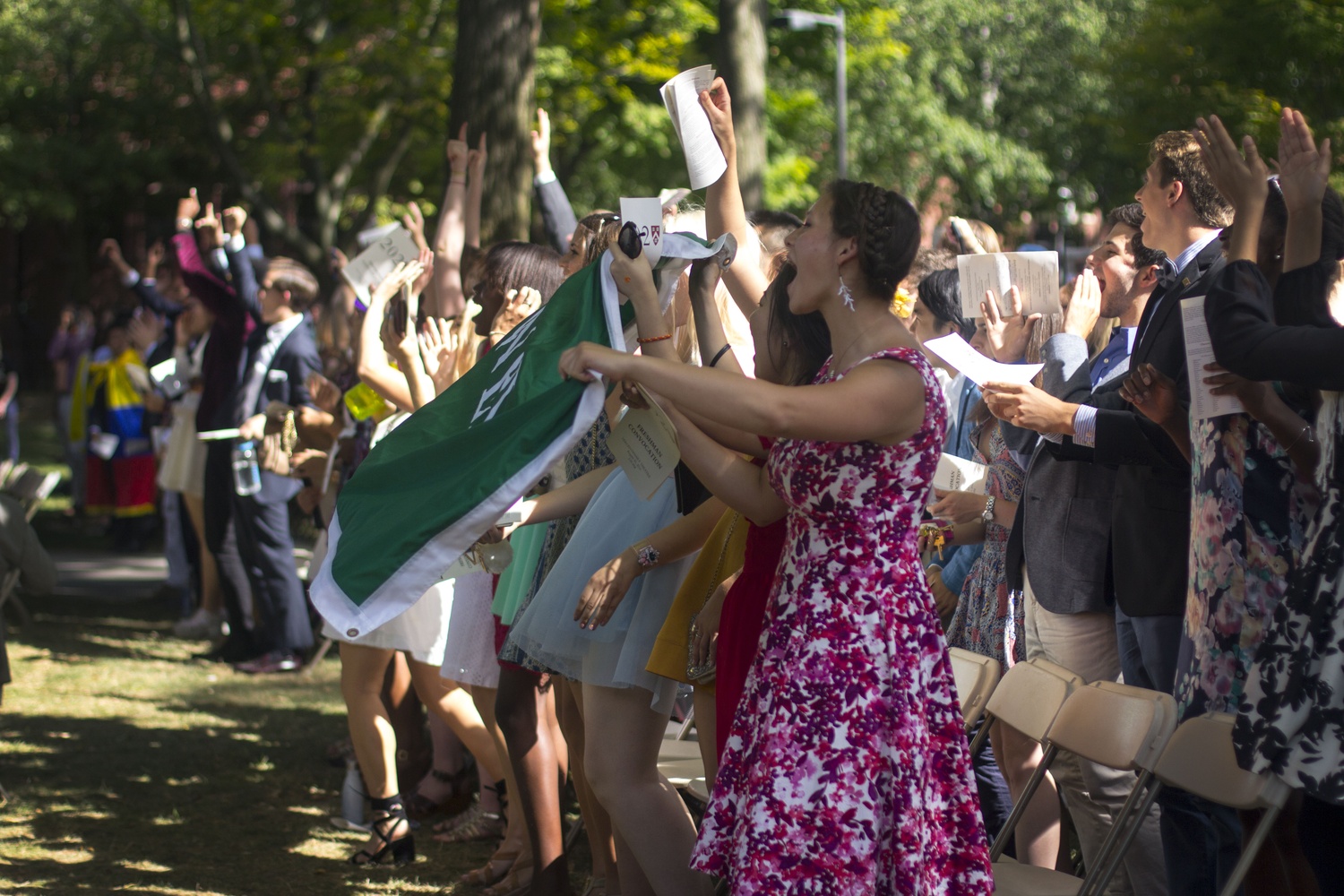 Freshmen in Weld cheer at the Freshman Convocation on Tuesday as their dorm was called and officially welcomed to Harvard. This year’s Convocation, a recent tradition that was instituted first for the Class of 2013, featured speakers such as Dean of the College Rakesh Khurana, who encouraged students to be “skeptical idealists rather than cynics” throughout their time at the College. By Annie E. Schugart
By Andrew M. Duehren and Daphne C. Thompson, Crimson Staff Writers

With wide-eyed freshmen seated in Tercentenary Theatre for their convocation ceremony, prominent Harvard administrators, including University President Drew G. Faust, challenged the new students to make the most of their nascent college careers and pursue truth in the midst of what she considered toxic public discourse.

The Tuesday afternoon ceremony, which takes place at the beginning of every academic year, welcomes freshmen to campus and features a series of student and faculty speakers.

In her address, Faust decried “the vile discourse of ethnic, religious, and racial hatred that has spread with such active virulence in recent months,” cautioning students that the mission of a research university—pursuing truth—has become all the more urgent.

“At a time when we find ourselves in what pundits have dubbed a ‘post-factual world,’ universities must embrace, embody, and actively defend their very different standards of truth: their commitment to evidence, proof, and fact as the foundation for knowledge and the basis for action in the world,” Faust said.

This “wild rumpus of ideas,” Faust said, must be coupled with a respectful and inclusive attitude. “We need to feel safe enough, included enough, understood enough to dare to disagree,” Faust said.

Beginning with a prayer from Reverend Jonathan L. Walton, Pusey Minister in Memorial Church, the list of speakers included Faust, Dean of Freshmen Thomas A. Dingman ’67, Dean of the College Rakesh Khurana, Dean of the Faculty of Arts and Sciences Michael D. Smith, and Emma Woo ’17.

Retreading a number of his favorite credos, Khurana entreated the Class of 2020 to make their time at the College a “transformative,” not “transactional,” experience. Instead of checking boxes and using Harvard as a simple platform to successful careers, Khurana implored the students to be idealistic and think about ways to better the world and the University.

“Right now probably some of you think Harvard is awesome. Harvard is awesome!” Khurana said. “But it isn’t perfect. It’s not the culmination of some evolutionary apex in higher education. Harvard is imperfect because humans are imperfect, and our ideals are not easily realized.”

Between performances from the Harvard Choruses, the Kuumba Singers, and the Harvard University Band, several other speakers took to the tree-shaded stage. Like Khurana, Smith revisited familiar themes in his address, stressing that everyone is vulnerable to insecurities and jealousy before advising the freshmen: “Don’t compare, connect.” Woo, the president of the Harvard College Interfaith Forum, mused about the plurality of ideas she has encountered in college.

After the program, the freshmen—assembled in full for the only time besides their commencement in 2020—flooded Widener Library's steps for their customary class photo.