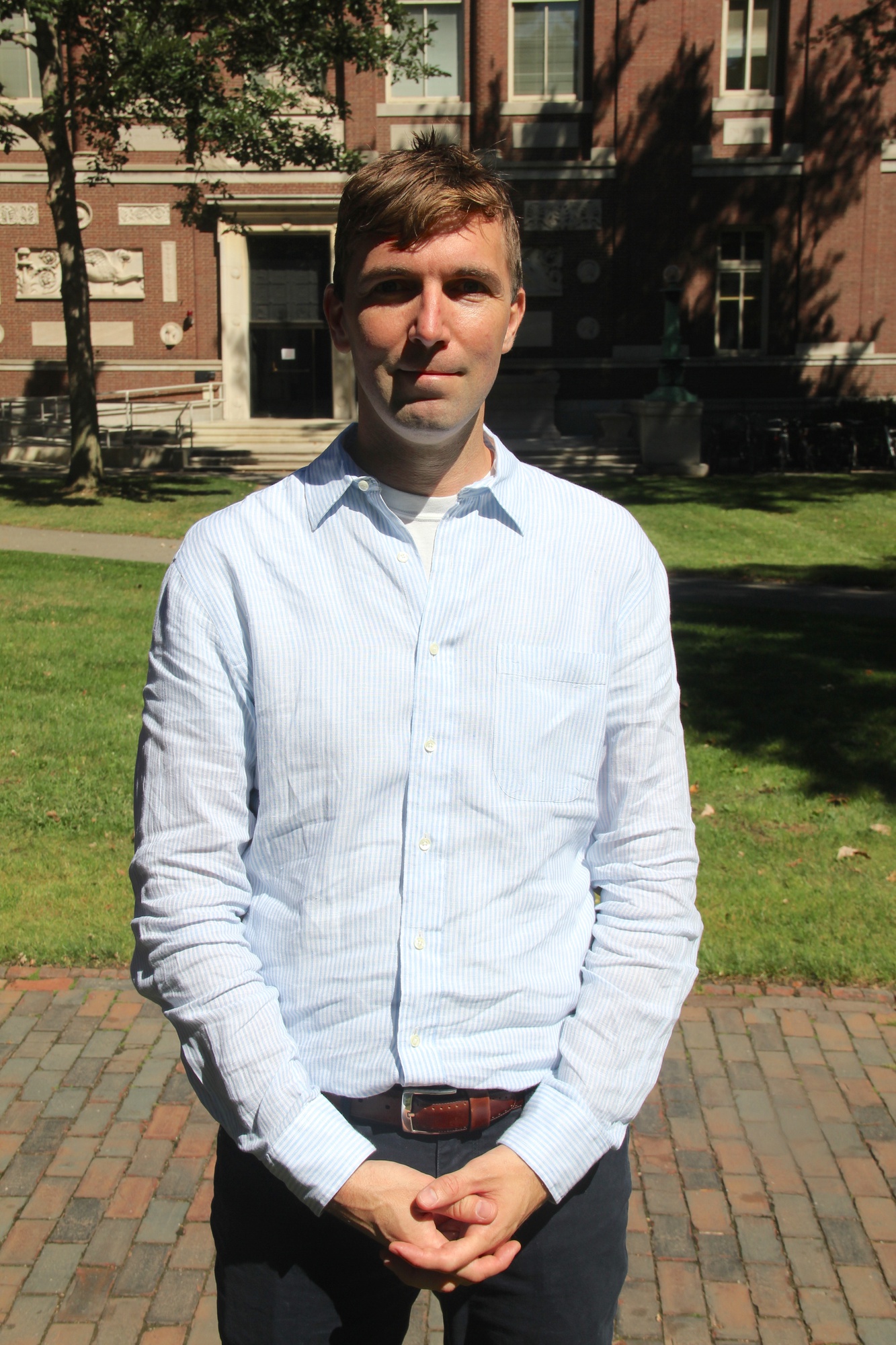 Wood also repeats many of the aphorisms typical of Silicon Valley entrepreneurs: He describes the ever-arching motivation for his work as the desire to design and build completely novel creations.
By C. Ramsey Fahs

Shuffling into the seminar room and grabbing a sandwich from a picked-over tray, a man makes his way to an open seat. On his shirt, there’s an “evolutionary progress of man”-type graphic. The design is familiar: It starts with a monkey followed by a stooping ape-like thing followed by a kind of hunched over Neanderthalish guy and then finally a man walking upright. 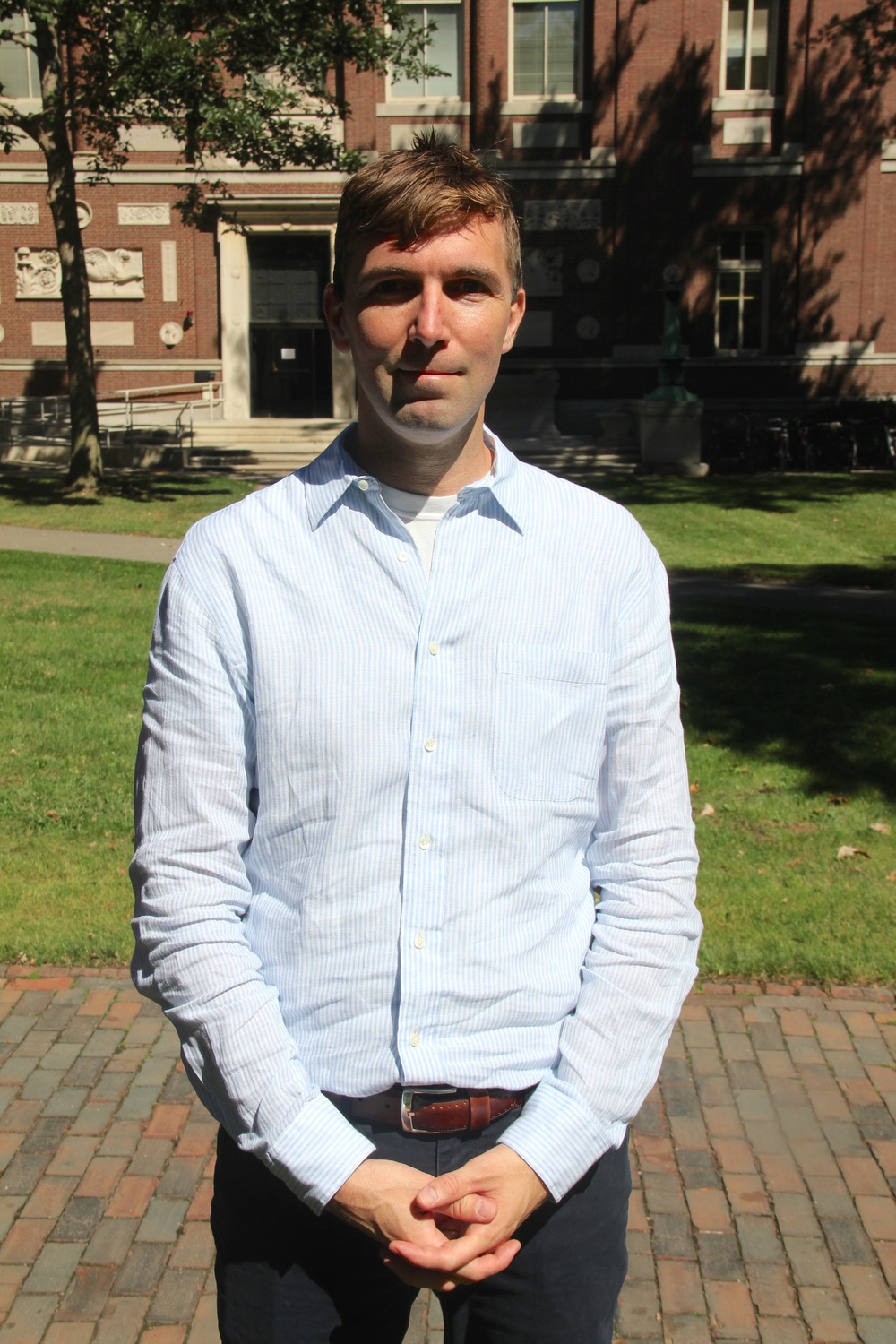 This shirt’s graphic adds another step in the progression, though. Just after the upright man comes the double-helixed logo of the Wyss Institute for Biologically Inspired Engineering, where Robert J. Wood is a “core faculty member.”

The man in the shirt is not Robert Wood, just one of the members of Wood’s lab group checking in to a weekly progress meeting. His shirt, though, is not too far away from the center of Wood’s work: designing and exploring the next stage of “life” on earth. The next stage of life on earth, as it turns out, consists of biologically inspired robots like the Robobee, a Defense Department-funded project at the center of Wood’s career. While today’s meeting doesn’t focus on the Robobee per se, the projects the lab members are working on could end up being applied to the robots someday. Wood watches the presentations in a stoic Captain Kirk-ish way, interjecting only occasionally and always with a specific question.

Though the picture accompanying Wood’s online bio looks ripped from an L.L. Bean catalogue, in person he gives off more of a Zuckerberg air: shorts, t-shirt, and zip-up hoodie. There’s a sort of symmetry in that: Wood has referred to Robotics as “the next Internet,” the next thing that will fundamentally and irreversibly change the way humans live their lives. Wood also repeats many of the aphorisms typical of Silicon Valley entrepreneurs: He describes the ever-arching motivation for his work as the desire to design and build completely novel creations.

And few could deny that Wood has built things that didn’t exist before. The Robobees are tiny flying robots that can interact “socially” like bees or other insects do; Wood helped build the program essentially from scratch.

Ultimately, the Robobees could be able to conduct surveillance, go on search and rescue missions, and, yes, pollinate flowers. The real crux of the Robobees project, though, is the “social” part of the social insect designation.

“Well you have one [bee], that’s great, but now if you have 1,000, how are they goingto interact and work together effectively?” Wood asks.

If you find the idea of 1,000 tiny robots acting in a coordinated frenzy a little off-put- ting, you aren’t the only one. In 2014, The Church of Stop Shopping, a group of self-styled “wild anti-consumerist gospel shouters and Earth loving urban activists,” protested the project, describing it as “Blade Runner crossed with Hell.” Wood says he was on sabbatical when the protest occurred, but found stories of the spectacle amusing nonetheless.

Despite The Church of Stop Shopping’s portrayal of the Robobees researchers as just so many Monsanto shills, Wood says the team thinks about the social implications of their work a fair amount. While he doesn’t find the typical concerns about technological unemployment to be “particularly valid arguments,” he says the team often thinks about the privacy and surveillance implications of a small, agile robot.

Indeed, the social implications, the potential real world impact, are what appeals to Wood about his work. “It’s not an abstract existence... It’s really getting your hands dirty and building things that didn’t exist before," Wood said.