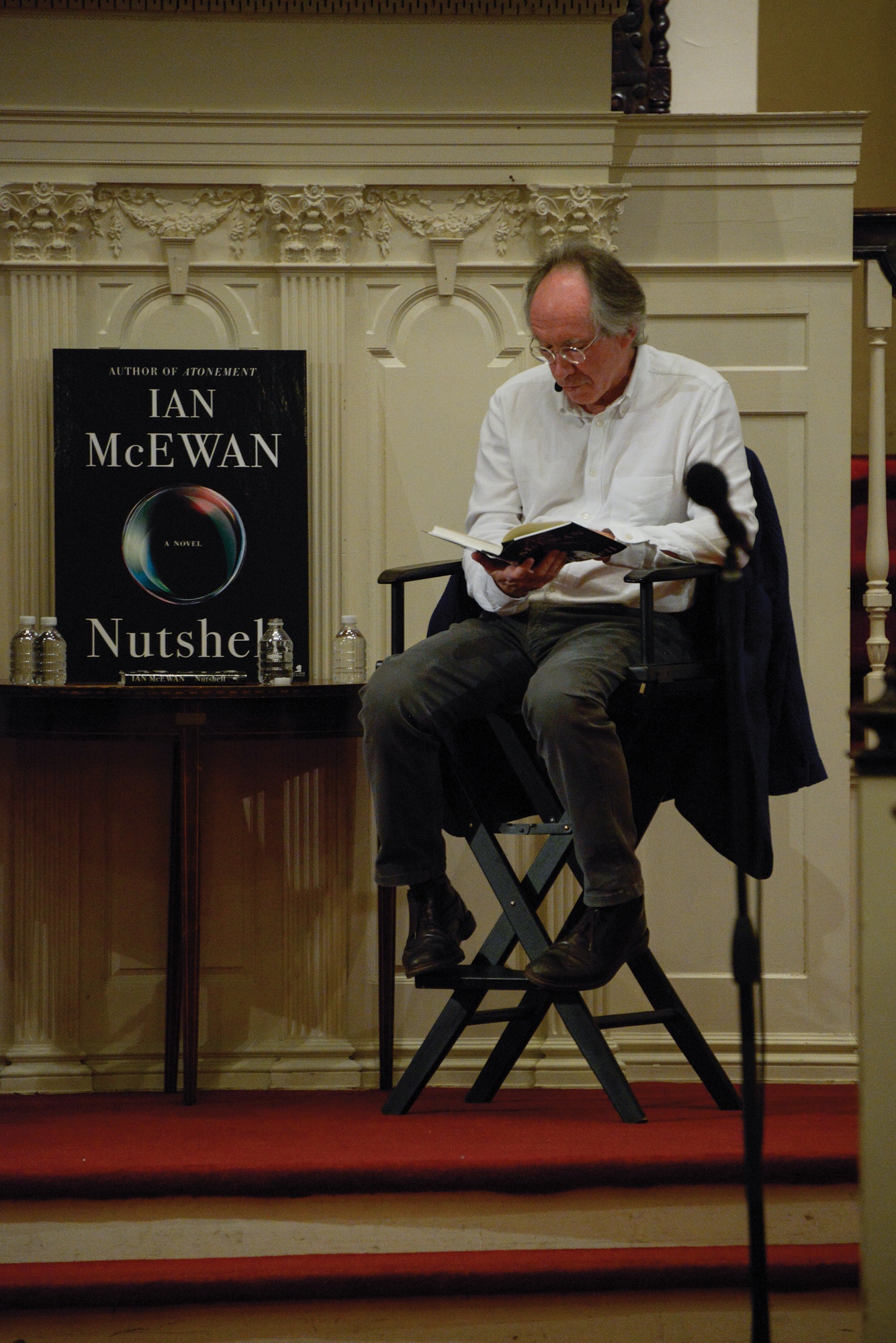 "I think my fetus would be alarmed at the prospect of a Trump presidency."
By Bettina Edelstein 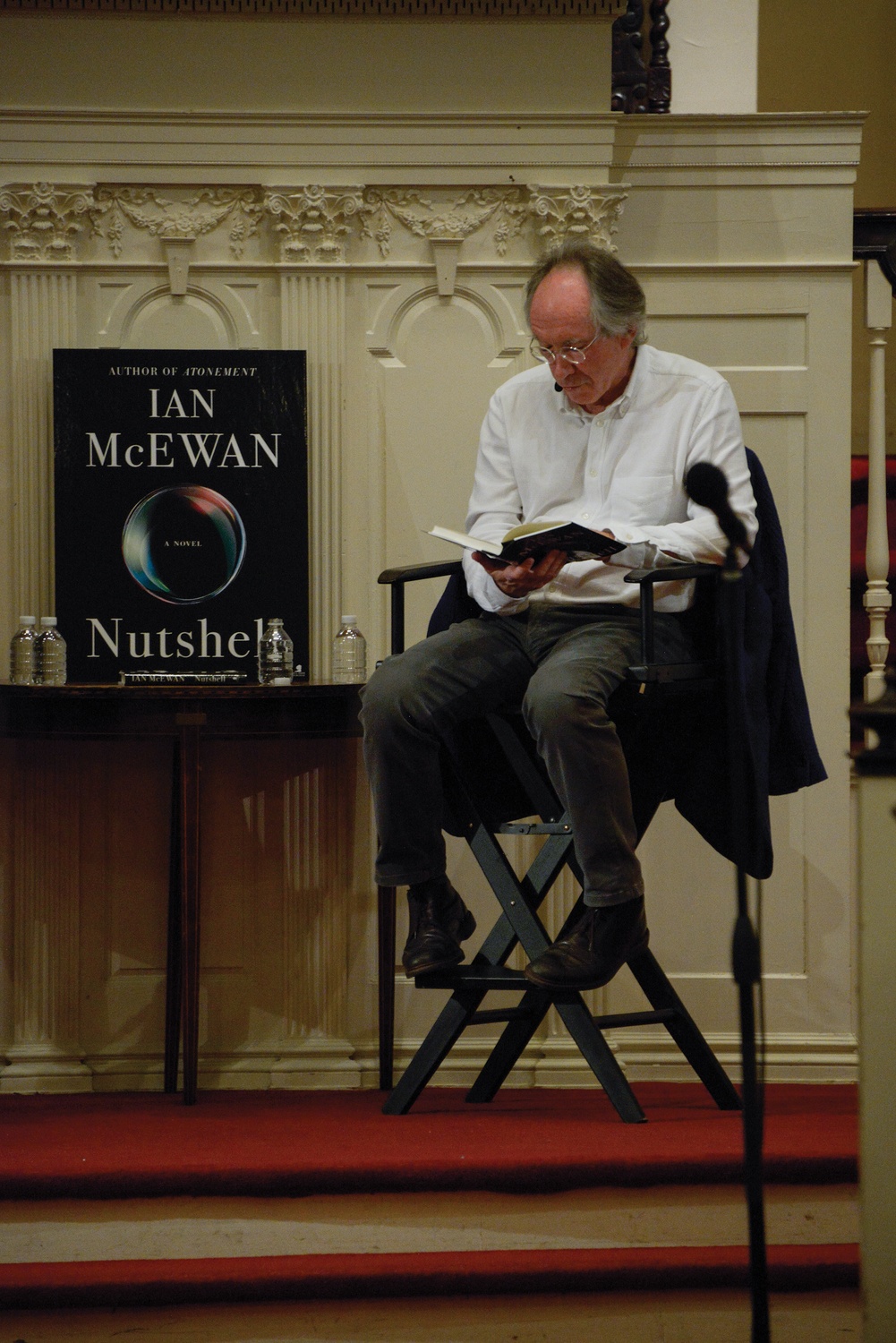 Award-winning novelist Ian McEwan has explored complex issues of morality and science, from quantum physics to the contradictions that arise when religious beliefs stand in the way of a life-saving blood transfusion. His new novel is perhaps his boldest yet. McEwan spoke last week at the Harvard Book Store about Nutshell, a modern interpretation of Hamlet narrated by a sardonic, self-aware fetus.

Fifteen Minutes: What was your inspiration for “Nutshell”’s unconventional narrator?

Ian McEwan: Well, partly sitting with my daughter-in-law when she was heavily pregnant. I became aware of his [the fetus’s] presence in the room, and it lodged a sort of question mark in my mind. And then I guess I really wanted to connect back to my writer self of 40 years ago when I had a lot of crazy and improbable narrators and take a break from researching. I had the sense that it would be playful and fun and break with the laws of physics and biology.

FM: Had you been actively searching for a topic to write about or did it just come to you?

IM: It just came to me, really. I re-read Shakespeare a lot, so that’s always at the back of my mind. It just began, and once I had the concept, I just had fun with it. It was a pleasure to write. 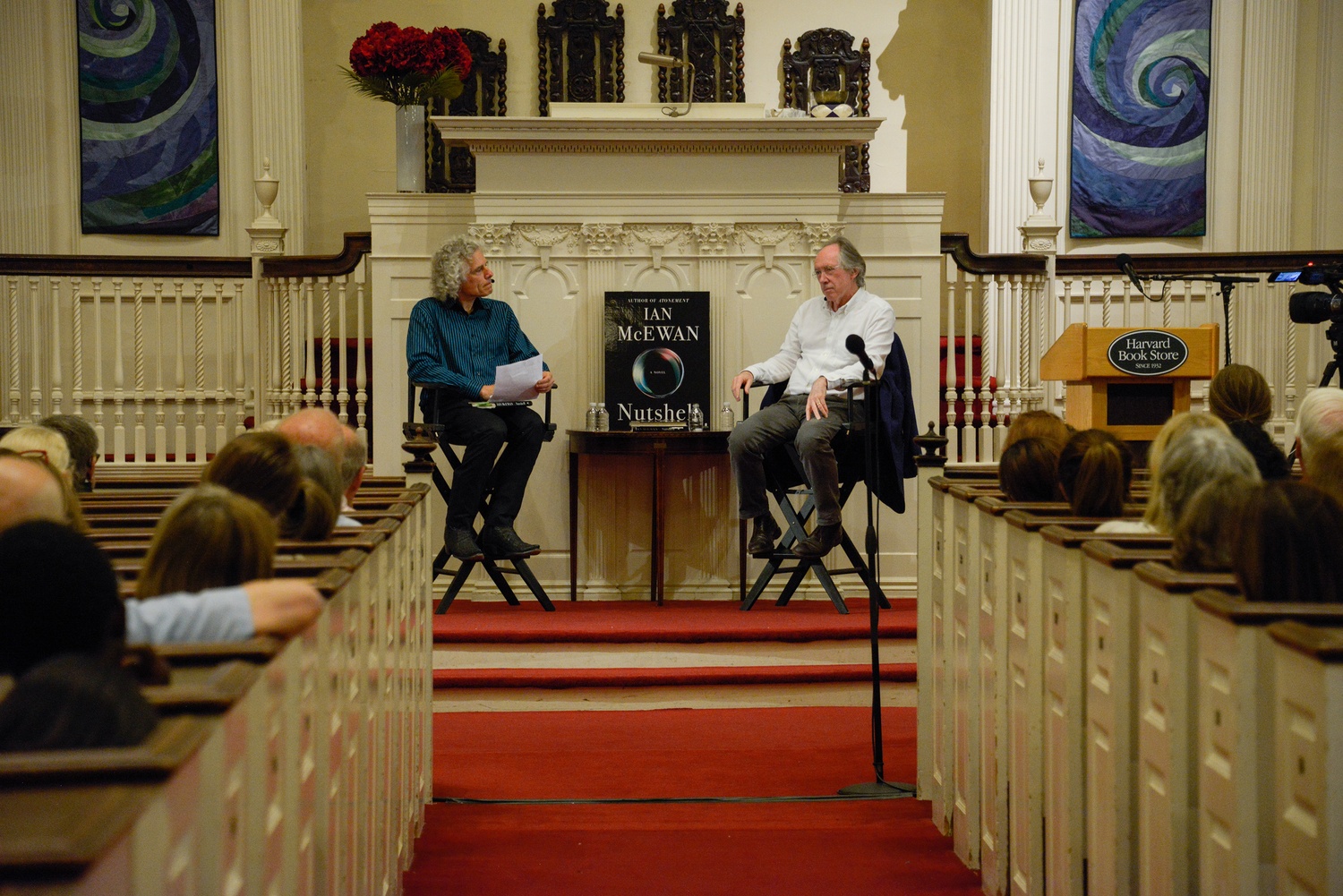 FM: When did you develop the idea of basing the premise on Hamlet?

IM: Right from the beginning, it was always intertwined. Who is the most eloquent character ever created in literature and English? Hamlet burst upon the world scene in 1600 or 1601. We’ve probably never had a character so clever, so self-doubting, so specifically a person not representing a virtue or a vice like so many were up until that time.

FM: Many of your other works like “Saturday” and “Solar” have required extensive research. How was “Nutshell” different?

IM: It was great not to be talking to experts for once. It was a holiday really. I never had to stir from my desk and could reach into my own thoughts. I enjoy research, and I’ve always made it integral to the process of writing, but this was just a complete departure. I don’t know where it will lead me in the future.

IM: Writing “Saturday,” I shadowed a neurosurgeon for almost two years, whereas writing “Sweet Tooth” about the intelligence world, it was really a matter of a great deal of reading and one or two lunches with ex-spies. I can’t draw any comparison between one [of my works] and another.

FM: Your talk at the Harvard Book Store was with Steven Pinker, whose work lies in cognitive psychology and language development, important aspects of “Nutshell.” Is this field something you are particularly interested in?

IM: Steve Pinker and I have been on stage before a half-dozen times, if not more. It’s not only about language learning, but also just the whole range of cognitive psychology and his reflections on science as a worldview that have impressed me enormously over the years. He seems to be an intellectual for our times. His sense of what science can do is a totality of how we view the world... My fetus narrator has quite a strong scientific worldview, and some might find confidence with Steve.

FM: On the second page of “Nutshell,” the narrator calls itself a “blank slate” that writes upon itself as it grows by the day. “Blank Slate” is the title of one of Pinker’s books.

FM: Did you ever think about being a fetus?

IM: I have never thought of myself in those terms, simply because we don’t have any memory. Salvador Dali claimed to remember being in the womb. There simply isn’t enough connectivity between neurons to lay down memories.

FM: “Nutshell” is clearly pushing some boundaries, but is there anything that you would never write about?

IM: Yes. Golf. One of the most tedious games I’ve ever witnessed. Maybe taxes. Joking apart, I think all writers should be prepared to address all subjects. The issue is not what the subject is but what we do with it.

FM: Speaking of writers, who are some writers who have influenced you?

IM: At the beginning of my career, I was very influenced by Kafka. He was partly the source for a whole series of unusual narrators. “Nutshell” has an origin in that influence. But over my lifetime, I guess everything influences me, specifically everything I enjoy. Beyond a certain stage, influence becomes less important. Influence is really what happens to a writer in the first years of his or her caree. Then they find their way forward.

FM: You told me earlier that writing “Nutshell” was like going back to the beginning of your career. How so?

IM: It was rejuvenating. Earlier this year, my publisher brought out my first book. I looked at these stories for the first time maybe since reading the proofs, and that was an extraordinary thing. They seemed so remote from me, but at the same time so familiar—a curious sensation. Connecting back with that kind of narrator was a holiday of the senses.

FM: Many of your books have been made into movies. Have you thought about “Nutshell” as a film? Who would play the fetus?

IM: Yes, well I can’t see Tom Hanks playing the fetus somehow. When I finished the novel, I thought “This is safe from any movie adaptations,” but we’ve already had inquiries. I think computer-generated imaging has opened the field so you can do virtually anything.

FM: The fetus thinks a lot about the world he’s being born into—he is very self-aware and has a firm worldview. To what extent are his thoughts your own?

FM: What would the fetus think of this world with its current political situation?

IM: I think my fetus would be alarmed at the prospect of a Trump presidency. His vote would probably be cast out of fear of Trump. The fetus tries to find reasons to be cheerful and curious about the world in the 21st century, but one of his main concerns is whether we can scrape through the next 80 odd years without the use of nuclear weapons. On the evidence so far, I don’t see Donald Trump will serve the cause well.