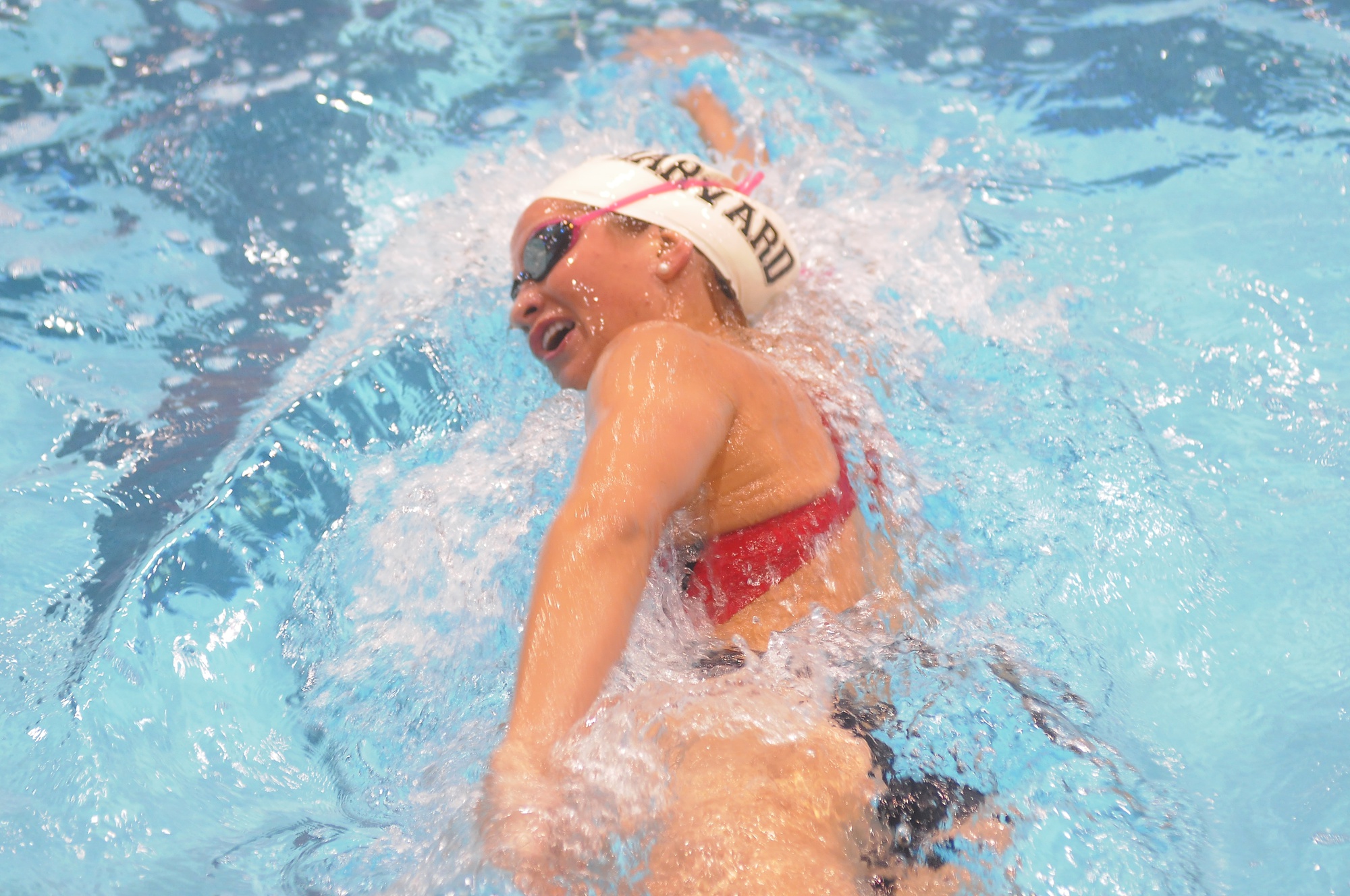 This weekend, Harvard women's swimming and diving remained undefeated with a pair of wins over Ivy foes. By Tiana A Abdulmassih
By Isabel DeLaura, Crimson Staff Writer

The divers put up impressive performances on Friday, with junior Hannah Allchurch taking home gold and silver medals in the three-meter and one-meter competitions, respectively. She was the only diver to break 300 points in the three-meter, finishing with a score of 301.40.

Allchurch was followed by teammates junior Jing Leung, sophomore Katie Russ, and junior Alisha Mah in the three-meter. Meanwhile, in the one-meter, Mah took first and Russ took third. Leung finished in fourth, handing the Crimson sweeps in both board events.

“Over the past couple of years, I've come to see training trip as a perfect opportunity for our team to bond,” junior standout Geordie Enoch said. “A week with the team, away from the Harvard bubble and away from outside distractions, always helps us become closer and more cohesive than we've been all season.”

Junior Kristina Li echoed this sentiment, explaining the “60-point set,” an exercise emphasizing unity, in which each athlete is assigned an event and a time, and if she finishes the event under the given time, the entire team is awarded a point. The goal is to make it to 60 points as fast as possible.

“This set gave each of us a chance to step up and really race for the team as well as cheer and show our support for each other, which was basically a dress rehearsal for how we want to be at the end of the season,” Li said.

This cohesiveness was apparent in the performance of the team in a range of individual events and relays. In the 400 free relay, co-captain Daniela Johnson, fellow senior Victoria Chan, and and two freshmen, Jerrica Li and Mikaela Dahlke, took home first. Dahlke shone individually as well, taking first and second in the 200 and 100 free, respectively. The rookie was edged out in the 50 free by fellow freshman Mei Lynn Colby for third place, by 0.05 seconds.

Colby also saw success in the 100 back and 100 fly. She followed sophomore Brittany Usinger in the fly, with the teammates coming in second and third, respectively. Her 100 back performance was good for second, behind Kristina Li. Senior Marissa Cominelli came in third in the same event, giving the Crimson yet another streak. Li dominated in the 200 back as well, earning a silver with a time of 2:01.91.

“I think that is something that we do very well, actually. We are able to keep the mood light on deck and just have fun with our races,” Li said. “It definitely paid off because every single swimmer and diver stepped up, which was really inspiring to see.”

On the distance side, senior Willa Wang was the top Harvard placer in the 500 and 1000 free, coming in first and fourth respectively. She missed a second-place finish in the 1000 by slightly over a second but managed to gain nearly nine seconds on the fifth place finisher. However, the senior made up for the narrow loss by taking gold in the 500 free with a time of 4:55.99. She was trailed by sophomore Meagan Popp in third.

Yet another first-place finish came from sophomore Sonia Wang in the 200 IM, where she touched the wall in 2:05.55. In addition, she took third in the 200 back.

Riding on this momentum, the Crimson looks forward to applying its strengths both from the training trip and this meet against two Ancient Eight foes. According to Enoch, the upcoming HYP and Ivy Championship meets will require focus and attention to detail that the team has put to practice in dual and tri meets in conference play.

“In the next couple of weeks, we'll keep working on the small things that make all the difference in races that come down to hundredths of a second,” Enoch said. “Making our turns tighter and putting our heads down for the finish earlier.”