No Impulse Purchases Here with ‘Next Customer Please’ 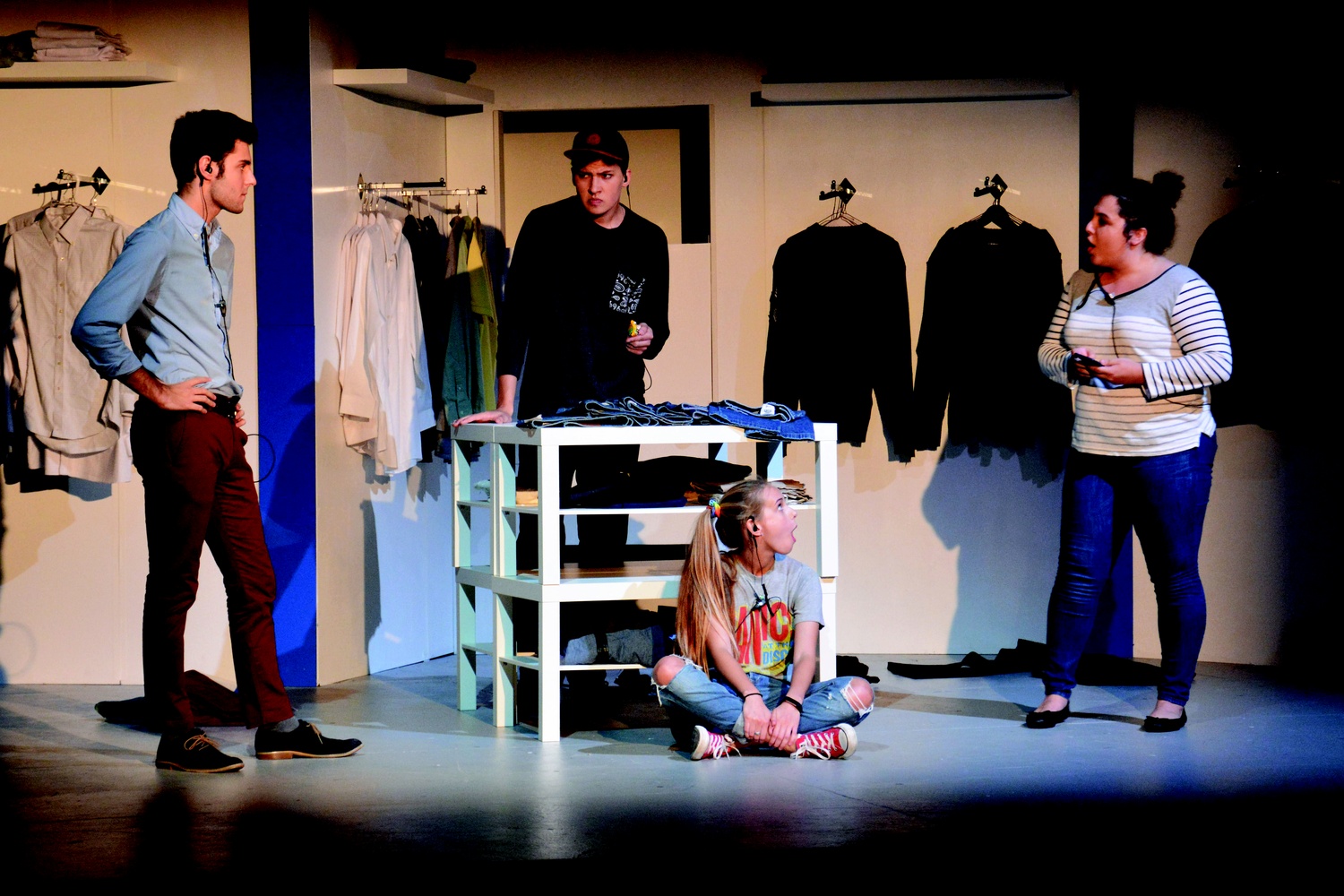 The cast of "Next Customer Please" performs at the Agassiz Theater. By Karina G. Gonzalez-Espinoza
By Melissa C. Rodman, Crimson Staff Writer

“Next Customer Please,” an original play by Boyd I.R. Hampton ’16, served up some laughs as promised—nothing less, nothing more.

The light comedy, which ran Oct. 12 to Oct. 15 in the Agassiz Theater, centered around the fast-paced banter and farcical staging of the day-to-day interactions of several dramatic, talkative retail employees. The actors performed their quirky roles with enthusiasm; the minimalist set with colorful clothes hanging on the white walls and folded in piles looked convincingly like a ready-to-use Old Navy; and many of the play’s outlandish one-liners were amusing. “We work at a store that is often compared to a clearance bin at Walmart,” store manager Derek (Julius Wade ’20) says wryly. Like a grab-bag Walmart bin, this show wasn’t infused with gravitas or interested in weighty issues or existential crises, nor was the production intended to be.

The actors dealt well with the bizarre situations that the script contrived. At one point in the play, a customer tries to strangle Joah (Bobby Malley ’20), one of the employees, with a scarf. At another point, Derek cleans up feces from a dressing room, not a rare occurrence in the fictional store, called The Break. Set apart as color-lit flashbacks and interspersed infrequently between scenes of employees interacting, these employee-customer vignettes were outrageous, unrealistic, and, in the case of the poop pickup, sometimes came across as lowbrow and uncomfortably weird. But it’s all in a day’s work, and the cast clearly enjoyed working together to bring the story to life. Wade, in particular, succeeded in crafting Derek’s personality: crazy-eyed, anxious, slightly nefarious, but with a heart of gold underneath.

In this way, the show’s weaknesses—vague plot development and a rushed ending—were likely a product of the script, not weaknesses on the part of the production’s give-it-their-all actors or the smart blocking choices by Director Carla Troconis ’19, which made use of both the Agassiz’s elevated stage and the space in front of the platform. Despite many funny one-liners, the storyline didn’t proceed very smoothly.

In bare-bones terms, a very pregnant and no-nonsense boss, Pam (Mimi Alphonsus ’21), arrives at The Break to tell Derek that he will have to fire one of the employees, but Pam ultimately fires Derek, although the show takes a long time to get there. And, for all of Derek’s former chutzpah and the show’s admirable dedication to humorous and fast-witted dialogue, this ending felt underwhelming, uncharacteristically mellow, and out of place. The cast ultimately succeeded in their commitment to delivering the production’s farcical elements, but the show itself struggled to hang together structurally.