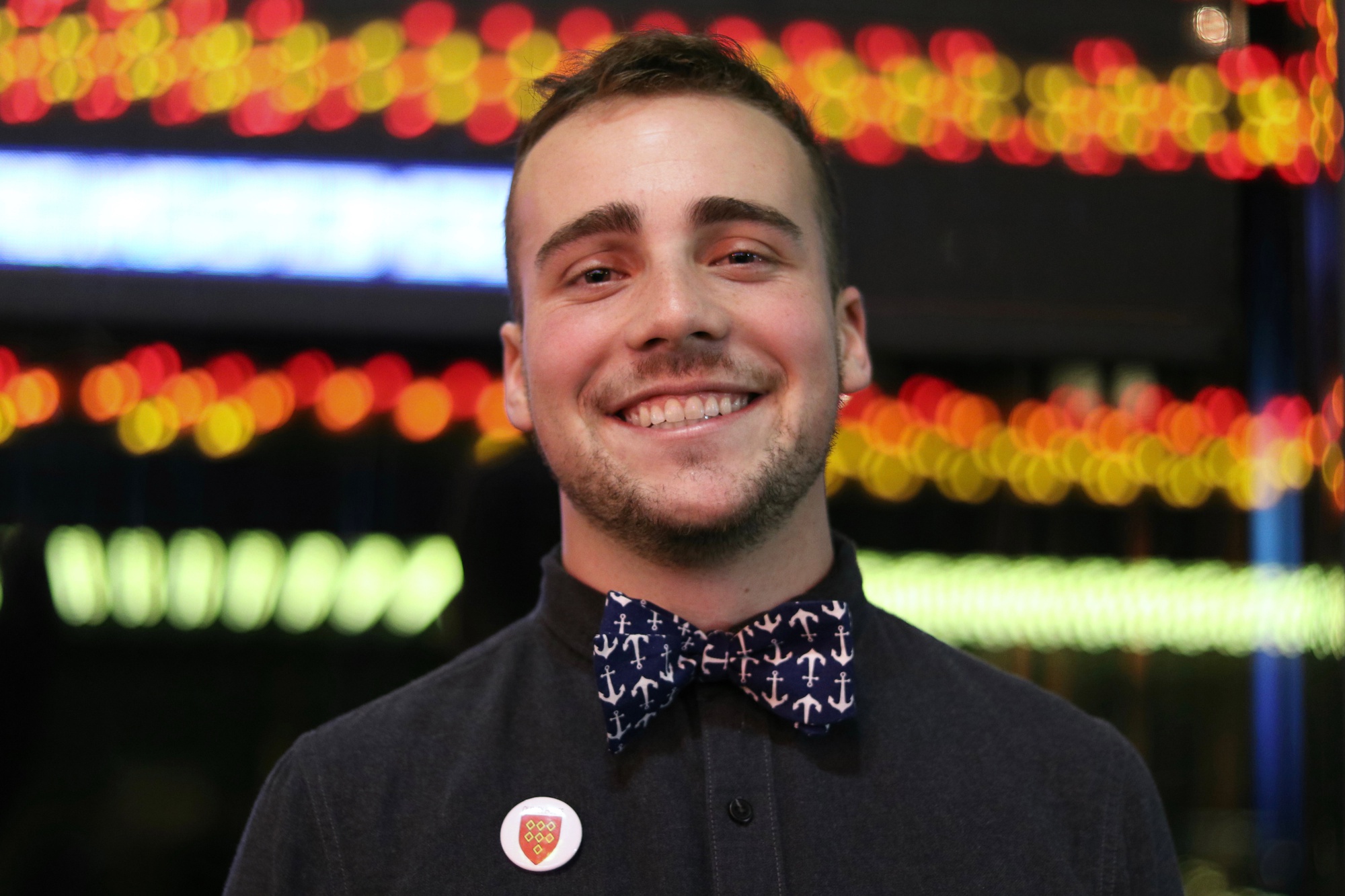 As he enters the subterranean murk of the Harvard Square T stop, Wyatt M. Robertson ’18 isn’t hard to identify: Part of it is the way he bounds down the steps, but most of it is the name tag still clinging to his shirt. It’s a vestige of the dinner he’s just left, a Senior Class Committee event at the Faculty Club. He unclips the tag, shamefaced, as we board the Red Line, and unzips his backpack to tuck it inside. His jacket is also in there—he’s wearing only a t-shirt in the 35-degree chill—but that’s not the strangest part. Nestled toward the back of the bag, where you might expect to see a laptop, is a wire clothes hanger.

The clothes hanger emerges again once he’s led me up several flights of stairs in a Boston building. He pulls it out of his backpack after we catch our breath in a top-floor room with oily, sloping ceilings. That distinctive clothes hanger shape melts and morphs as he fashions the wire with deft hands, talking all the while.

“I met a group of friends from around Boston, teenagers who had been to this building before and we’re all into photography.” Robertson pauses to slide the coat hanger along the crack of the door to his right with an expression of intense concentration. “They challenged me to get to the roof, and then they—I guess they initiated me.” A slow exhale as he contemplates the lock from above. “They kind of initiated me into this cool world of finding alternative places to take some of my favorite photos of Boston.”

That “cool world” wasn’t on his radar until Robertson’s freshman year, when the record-breaking snowfall weighed down fire escapes around the city and turned them into “actual ladders. We would see those and be like, ‘Whoa, that would be cool to go on top of!’”

Things progressed from there. Sophomore year, he started learning how to pick locks, mostly from the internet. For him, it’s “comparable to why people like crossword puzzles and Sudoku,” but ultimately it’s a means to an end; lock-picking is, and always has been, about his photography. “It didn’t really start with locks. I started just getting to places that seemed really cool so I could document them, and upon doing that, discovered that a lot of those places were locked.”

His specific skillset, he says, gives him a unique perspective on life at Harvard and beyond. Having spent his junior year studying abroad in Sydney, Amsterdam, and Morocco, he had to get comfortable with combination locks, “because that’s the kind of lock people use” throughout Sydney—whereas Harvard, he tells me without a trace of irony, is strictly a Yale lock campus. The combination lock was the second type that he learned to pick; his tone turns nostalgic as he explains, step by step, how to fiddle it open.

“You can pick a combo lock with a Coke can as long as you have scissors or a knife,” he begins, launching into detailed instructions.

It’s important to Robertson that he pass through Harvard’s gates every once in awhile in search of adventure. That’s how the photogenic trips downtown began: They were a way to “clear [his] head, to explore new places, to maintain good mental health.”

Robertson gives me two pieces of wisdom: The first is to try everything. “In fact,” he clarifies, “try it multiple times, because oftentimes you’ll do stuff wrong.”

For example: Robertson initially tried being a Physics concentrator and a “heinous” Harvard Student Agencies model. These days he’s a Psychology concentrator, the second marshal to the Class of 2018, and an ordained minister—“it might come in handy some day”—and he’s still trying new things. He’s undergoing medical screening to donate a kidney.

The second piece of advice? Listen to more of Dexys Midnight Runners.

“I firmly believe that ‘Come On Eileen’ is the last song that should be played at any party,” he says. “Those times when people can feel like they aren’t concerned about anything and can just let loose and have a good time—I think they’re so important.”

Not that Robertson will have the opportunity to blast ‘80’s pop on Harvard’s campus for much longer. He hasn’t “exactly reached any conclusions” about what he’ll do next: He mentions returning to the West Coast or even to Australia. He might even stay in Boston for a bit—as long as there are still roofs to explore, sunsets to document, and maybe, eventually, friends’ weddings to officiate.